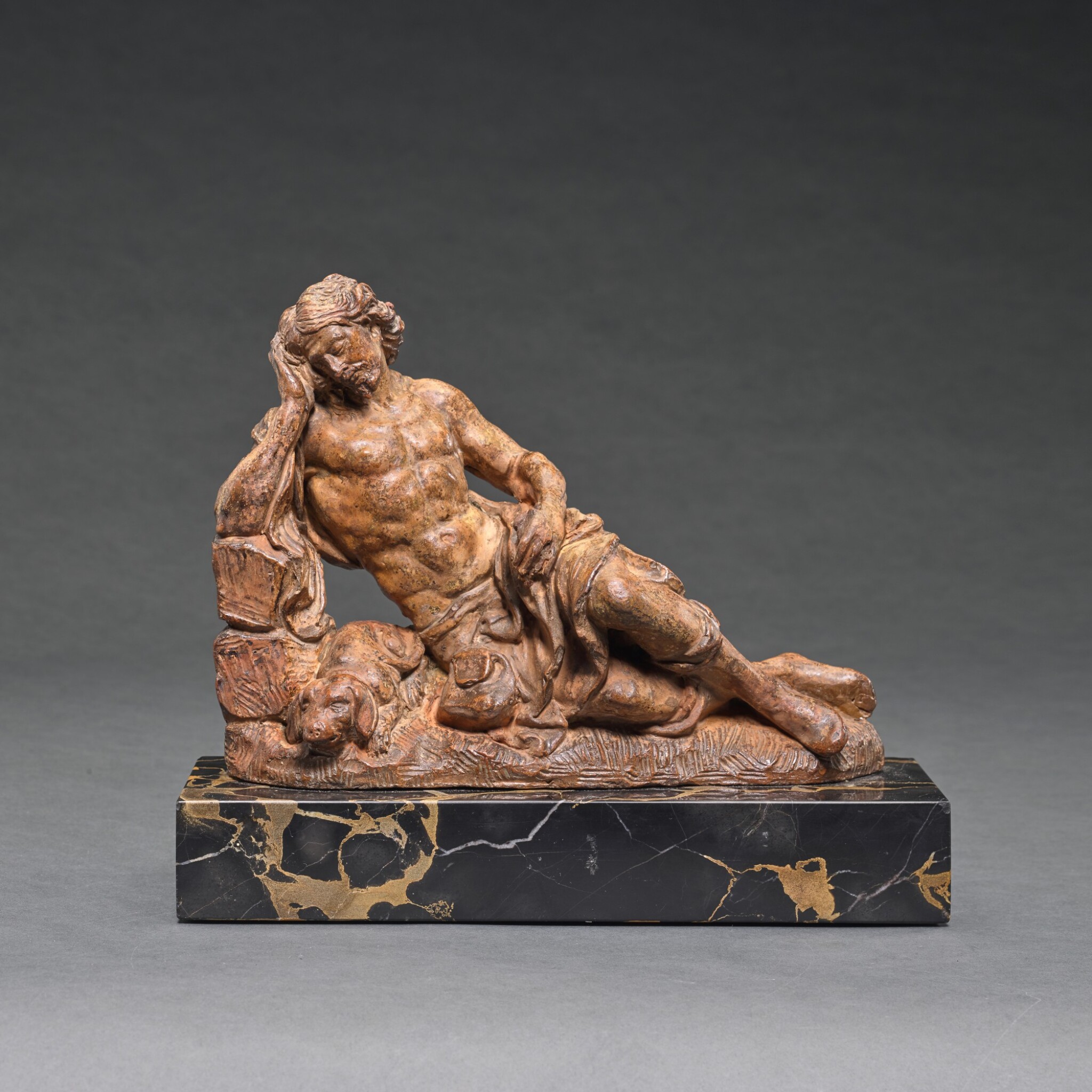 terracotta, on a nero portoro marble base

Overall the condition of the terracotta is good, with minor dirt and wear to the surface consistent with age. There are remnants of different paint layers to the surface. The proper left forefinger and finger next to it are reattached and there is glue visible. There are some associated losses to the other fingers. He appears to be holding fragments of a wood attribute which may have been a staff. There is a reattached section to his proper right foot. There are two small squarish patches behind his proper left thigh. A few small chips around the lower edges of the terrasse. The base is modern.

This beautifully modelled terracotta Endymion recalls compositionally the celebrated Sleeping Youth by Andrea del Verrocchio in the Bode Museum, Berlin (circa 1475/80; inv. no. 112). The reclining pose with prominently delineated chest musculature indicate that the artists responsible for the present terracotta was directly influenced by Verrocchio's model. This in turn indicates a Florentine origin for the present Endymion. The rocky base with sleeping dog is reminiscent of works by the 16th-century Master of the Unruly Children. However, the overall style of the present terracotta - the figure's hair, boots, flowing drapery - and pointed nose would indicate a mid-late 17th century dating. In pose and attitude the Endymion recalls Giovanni Battista Foggini's (1652-1725) Mercury and Argus (Lankheit, op. cit., fig. 131) of which a cast was sold at Christie's New York on 29 January 2014, lot 15. The facial type is reminiscent of a number of Foggini's figures including his St John in his Baptism of Christ group (Palazzo Pitti, Florence, published in Pratesi, op. cit, fig. 204). There are also some parallels with bronze double figure groups by Ferdinando Tacca. Note for example the Ruggiero and Angelica in the Louvre (inv. no. OA 7811). Together these comparisons would suggest that the present terracotta was modelled by a skilled sculptor active in Florence probably within the circle of Foggini.