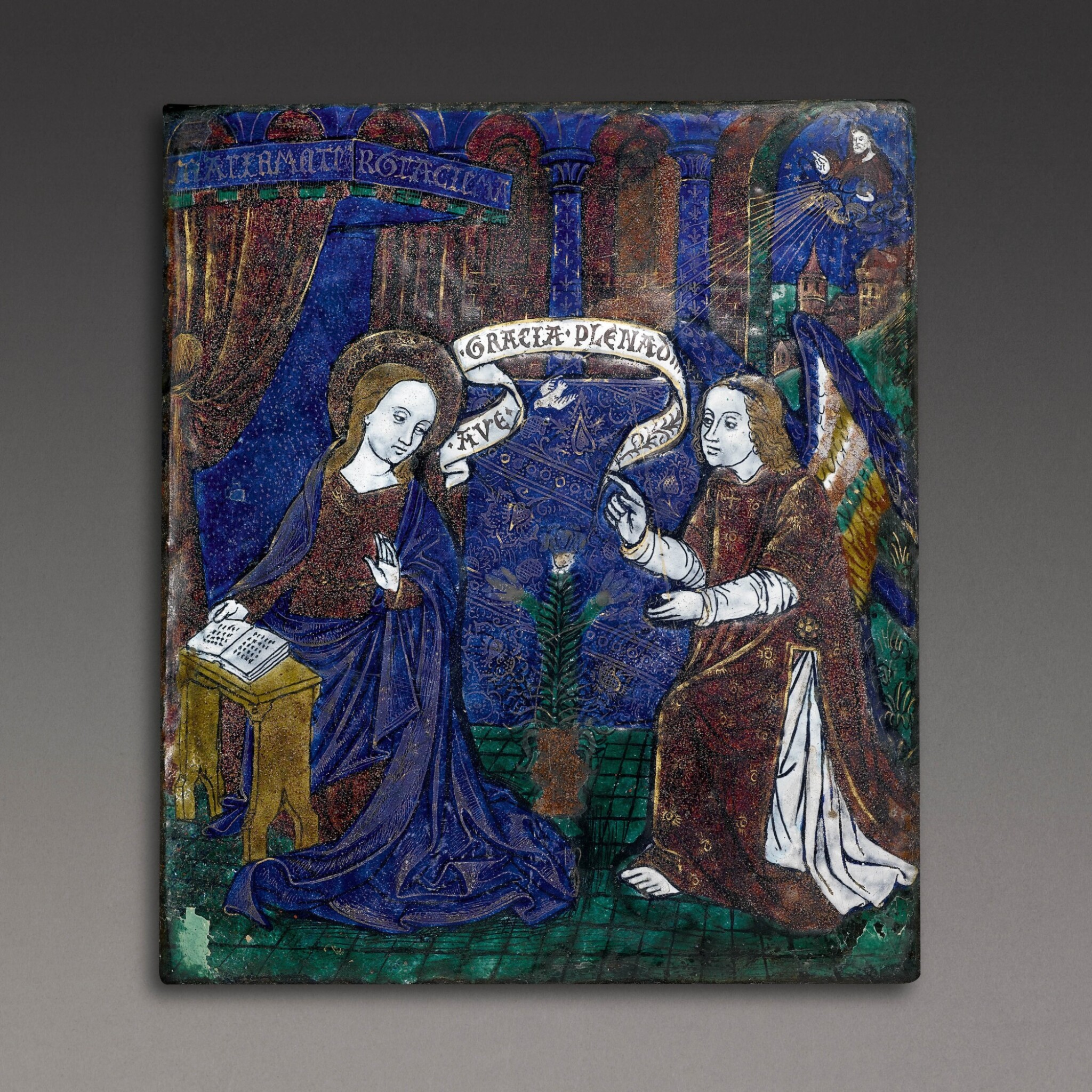 Plaque with the Annunciation

the angel's banderole inscribed: AVE GRACIA PLENA in brown-red enamel and the canopy above the Virgin: MARIA MATER GRACIEMA in gilding

The purple enamel is chemically unstable as is often the case with early enamels. This has led to the crizzling of this colour throughout. Salts have formed on the two streaks of lighter purple on the angel's wings. All four corners and an area in the centre of the lower edge have been restored. A chip was restored or reattached in the blue area of the throne near the Virgin's right shoulder. There is some minor pitting in the lower left corner and some craquelure to the blue at the Virgin's waist and the capital of the central column. The gilding is worn but the decorative patterns are still clearly ghosted. There is a pin hole just under the dove. There are some scratches fired into the enamel around the lily. There is a thin layer of deteriorated material which may have functioned as the counter enamel to the reverse. There are a few specks of paint and remnants of an old paper cover on the reverse of the plaque. Otherwise the condition of the enamel is stable with some wear and dirt to the surface consistent with age. The colours and overall drawing of the piece are well preserved.

The composition derives from Israhel van Meckenem's engraving of the Annunciation which, in turn, is a reversed version of a print by Martin Schongauer. Another early enameller, The Master of the Louis XII triptych, also referred to Van Meckenem's Annunciation (see Victoria and Albert Museum, inv. no. 552-1877).

Stylistically the present plaque is a beautiful example from the early period of painted enamel production in Limoges. It relates to works by the artist known as Pseudo-Monvaerni, whose name derives from the inscription MONVAERNI on a triptych now in the Taft Museum in Cincinnati (inv. no. 1931-268). Pseudo-Monvaerni is recognised as one of the first of the artists working with painted enamel in Limoges, having arrived in the city sometime around 1460-1480. Art historians have attributed an extraordinary number of enamels to the master since he was first named on the basis of the Taft triptych in the 1840s, leaving a rather incoherent body of work. Here the florid patterning of the background and gilding on the drapery, the linear rendering of the faces, hands and the drapery on an opaque white ground, and the distinctly Gothic composition are reminiscent of such plaques as the Flagellation in the Louvre (inv. no. OA6309E) or The Nativity from Cracow illustrated by Marquet de Vasselot (op.cit., pl. XIV). However, the present lot does not possess the yellows and greys, paillons, and slightly grotesque facial features that seem to characterise the more securely attributed plaques. Perhaps most closely related to our Annunciation is a plaque with Saint Martin and the Beggar in the Metropolitan Museum of Art (inv. no. 41.100.212), which incorporates a markedly similar approach to facial features, and the array and use of gilded decoration.