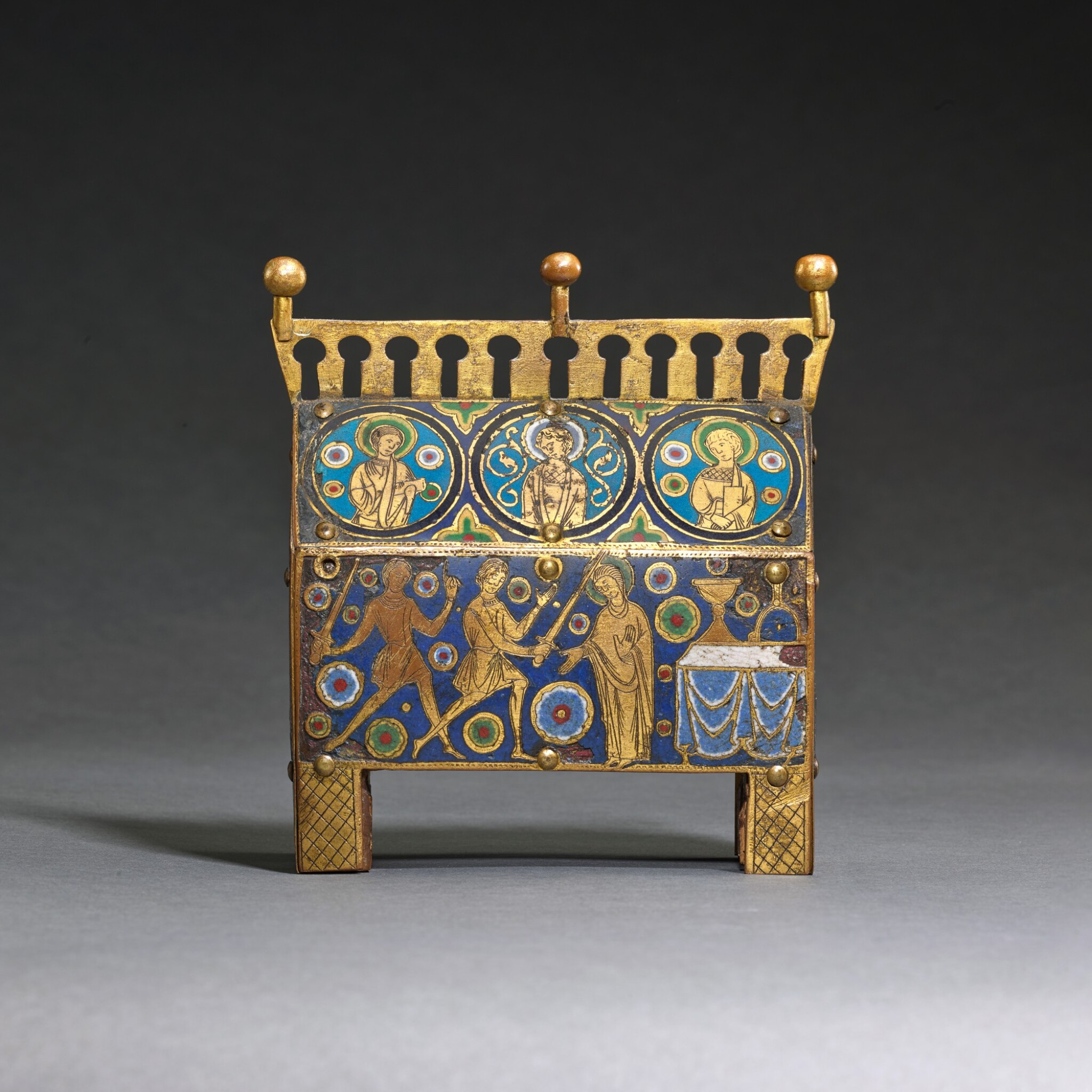 Châsse with the Martyrdom of Saint Thomas Becket

The lower section at the back and the comb are later replacements. The upper section at the front is also either later or associated. Otherwise the condition is good, with some wear and minor surface dirt consistent with age. There are some losses to the enamel in the martyrdom panel, notably to the background on the left side and the upper right corner and the altar. Further minor losses to the enamel on the other panels. There is minor stable craquelure to the enamel consistent with the material. The nail on the upper left corner of the martyrdom panel is replaced. There is wear to the metal, including some warping and dents as well as rubbing to the gilding. There is evidence of past worming to the partial wood core.

Limoges, Sciences et Arts appliqués à l'Industrie, 1886, no. 20
Archbishop Thomas Becket was murdered on 29 December 1170 by four knights on the orders of King Henry II. Shortly afterwards, miracles were reported, and in February 1173 Thomas Becket was canonised. Enamelled châsses depicting scenes from the life of Saint Thomas were crafted in the workshops of Limoges to meet the demand of worshippers fortunate enough to have acquired one of the saint's relics.

Of the fifty-two reliquary châsses with Becket's martyrdom listed in the Corpus des Émaux Méridionaux, the majority are held in public collections. The largest and most detailed example, dated circa 1180-1190, was sold in these rooms in 1996 and is now in the Victoria and Albert Museum (inv. no. M.66-1997). In 1538 Henry VIII de-canonised Becket following the establishment of the Church of England and ordered all images of the saint to be destroyed, accounting for the relative rarity of surviving Becket imagery.

The present châsse, recorded as no. 45 in the Corpus des Émaux, has provenance dating back to the 19th century. Having remained in the vicinity of Limoges until the mid-20th century, it featured in an exhibition of enamelled metalwork in 1886. Lacking the 'classical' applique heads displayed by most early Becket caskets, the present châsse is datable to the first decades of the 13th century. In both style and design it may be compared to a Becket casket in the Louvre (inv. no. OA 7745), dated 1220-1230, which equally depicts only two assailants in the central scene, while the lid shows a half-figure of the saint in a medallion surrounded by angels, instead of the apotheosis which appears on older examples. In both caskets the figures are more freely drawn, heralding the early Gothic style. It has been argued (Taburet-Delahaye, op. cit., p. 276) that the production of these later caskets depicting Becket's martyrdom was prompted by the solemn relocation of the saint's bones into a new shrine in 1220, which enabled a renewed distribution of his relics. The figural style of the present châsse finds another convincing parallel in an early 13th-century reliquary casket published in Bertrand, op. cit., no. 14.