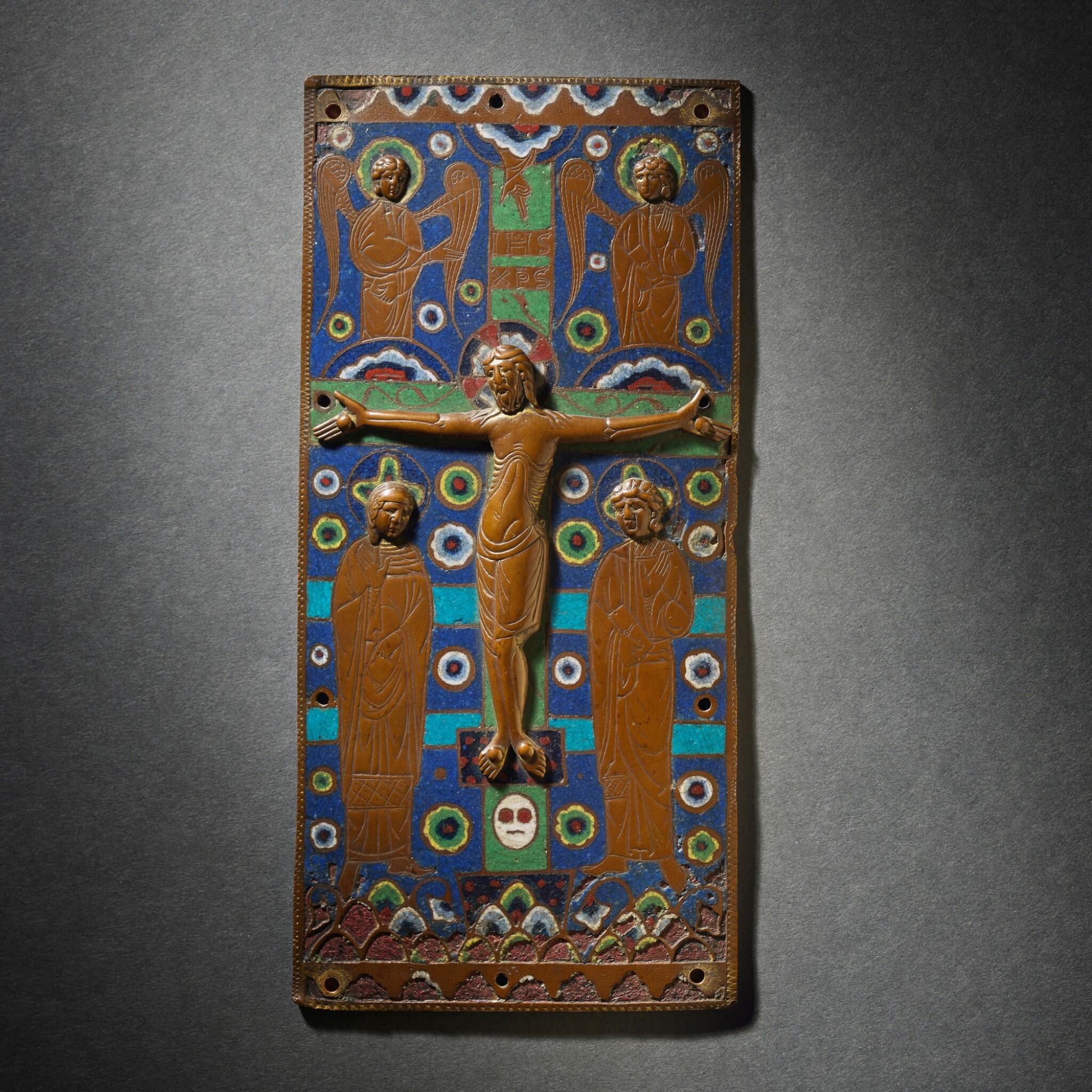 Book Cover with the Crucifixion

partially champlevé enamelled copper, with traces of gilding, on a modern Perspex mount

Overall the condition is good, with minor dirt and wear to the surface consistent with age. There are a few losses to the enamel, including: around the corners at the top; in the background to the right of Saint John's head; and more extensively at the bottom of the composition. There is some further wear to the enamel, including small chips and minor craquelure. There are a few traces of gilding to the copper, notably at Christ's neck and ribcage, the necks of the other figures, and around the top and bottom edges. There are ten small holes for mounting. There are a few dents and minor warping to the copper, notably at the bottom corners and the edge on the right hand side. There is some rubbing to the appliques.

Enamelled book covers were created to protect bound biblical texts while equaling in splendour the illuminations of the sacred words contained within. The workshops in Limoges first created book covers around 1185-1190. Because of their durability, and the efficient manner in which Limoges enamels could be produced and transported, the demand for these covers rose considerably throughout Europe in the early decades of the 13th century.

The subject matter of Limoges book covers is limited to two themes: the Crucifixion and Christ in Majesty. From surviving bindings it is known that the Crucifixion is most often featured on the front cover, with Christ in Majesty on the reverse. The present plaque with the Crucifixion corresponds with most other examples in its general design of a blue background divided by the Crucifix, which is flanked by the Virgin and Saint John the Evangelist, and surmounted by a pair of angels. The mounds below the cross invoke Golgotha, whilst the background is adorned with bands of colour and rosettes.

Of the 149 plaques with the Crucifixion recorded in the two volumes of the Corpus des émaux méridionaux, fewer than half have a full-length applique of Christ instead of an engraved body surmounted with an applique of just the head, making the present book cover a particularly notable example. In colour scheme, overall composition and the refinement of the figures, the plaque compares closely to a book cover in Angers, illustrated as VC 3 in Gauthier et al., 2011. A further striking parallel is found in a book cover at the Petit Palais, Paris (ibid., VB 37), though there only Christ's head is rendered in applique. The stylised skull at the foot of the cross in the present plaque, which is replaced in the above-mentioned book covers by the risen Adam, also appears in ibid., no. VA 7.