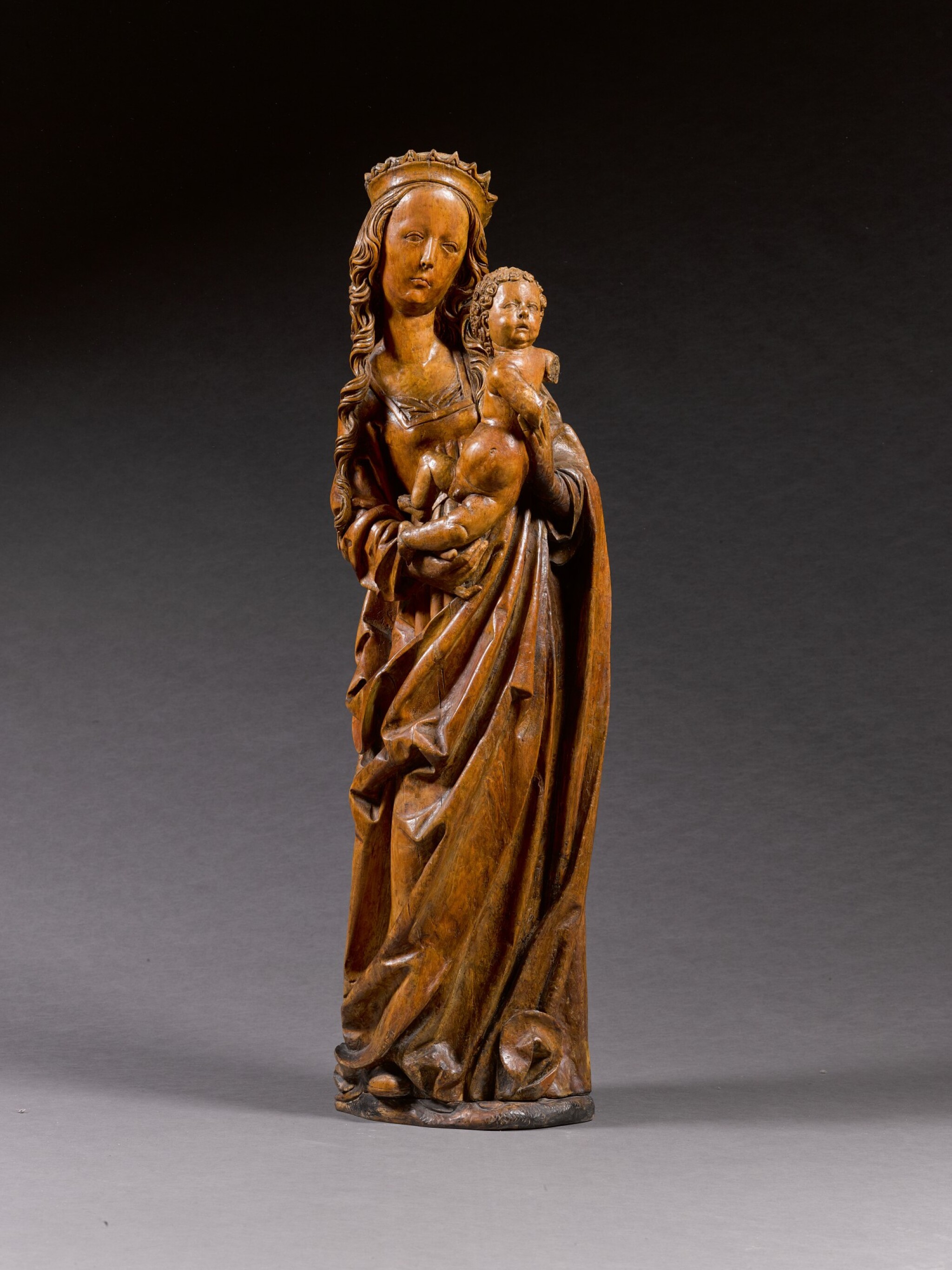 There has been extensive worming to the sculpture in the past, and throughout the surface the resulting losses have been filled with wax. The Child's proper left arm and proper right forearm are lost. Further losses to the Child's toes, and more minor losses, including to the Virgin's crown, to her proper right sleeve and to the bottom of her hair on the proper right side. There is some stable splitting to the wood consistent with the material, some filled, notably at the Virgin's drapery in front of her legs. Very minor traces of polychromy, notably at the Virgin's lips. There is some dark varnish or paint in areas around the bottom of the composition and to the Virgin's hair. The bottom section is carved separately and is probably later due to extensive worming at the back towards the bottom. Otherwise the condition is good. There is a modern metal loop at the back.

Please note the following amendments to the printed catalogue: Please note the additional Provenance and Literature. This lot will remain in New Bond street after the sale.
Gustav Schütz (1865-1939), Vienna;
private European collection
F. Kieslinger, Mittelalterliche Skulpturen einer Wiener Sammlung, Vienna, 1937, p. 20, no. XLVII and figs. 47-49
The seminal late Gothic sculptor Tilman Riemenschneider created an extensive following in his native Franconia and throughout southern Germany. This impressive limewood Virgin and Child is clearly indebted to the master's work in both style and composition. The motif of the Madonna's pose, drapery and the positioning of the Christ Child follow a type that appeared in Riemenschneider's workshop by the 1490s, as seen in a Virgin and Child in Bregenz (Kalden-Rosenfeld, op. cit., no. 18), whose Christ Child - though fragmentary - is similarly animated, moving towards the Virgin's left. A close comparison for the Virgin's appearance is found in a group from Riemenschneider's workshop in the Bayerisches Nationalmuseum, Munich (inv. no. 74/132), which was formerly part of a Doppelmadonna. Note the crown, the slender S-curve in her stance, and the drapery with a long swathe falling from her left arm and heavy folds at the centre.

The present Virgin is distinguished by her gentle inclination of the head and sweet, introspective facial features which, with delicately carved, downward-sloping eyes and small pursed lips, follow Riemenschneider's autograph works in a more simplified manner. In this she relates closely to works associated with the master's workshop and circle, notably an Angel sold at Sotheby's New York on 28 January 2010 (lot 289), and a Madonna in the Mainfränkisches Museum, Würzburg (Muth, op. cit., no. 62), which also displays an analogous drapery style.