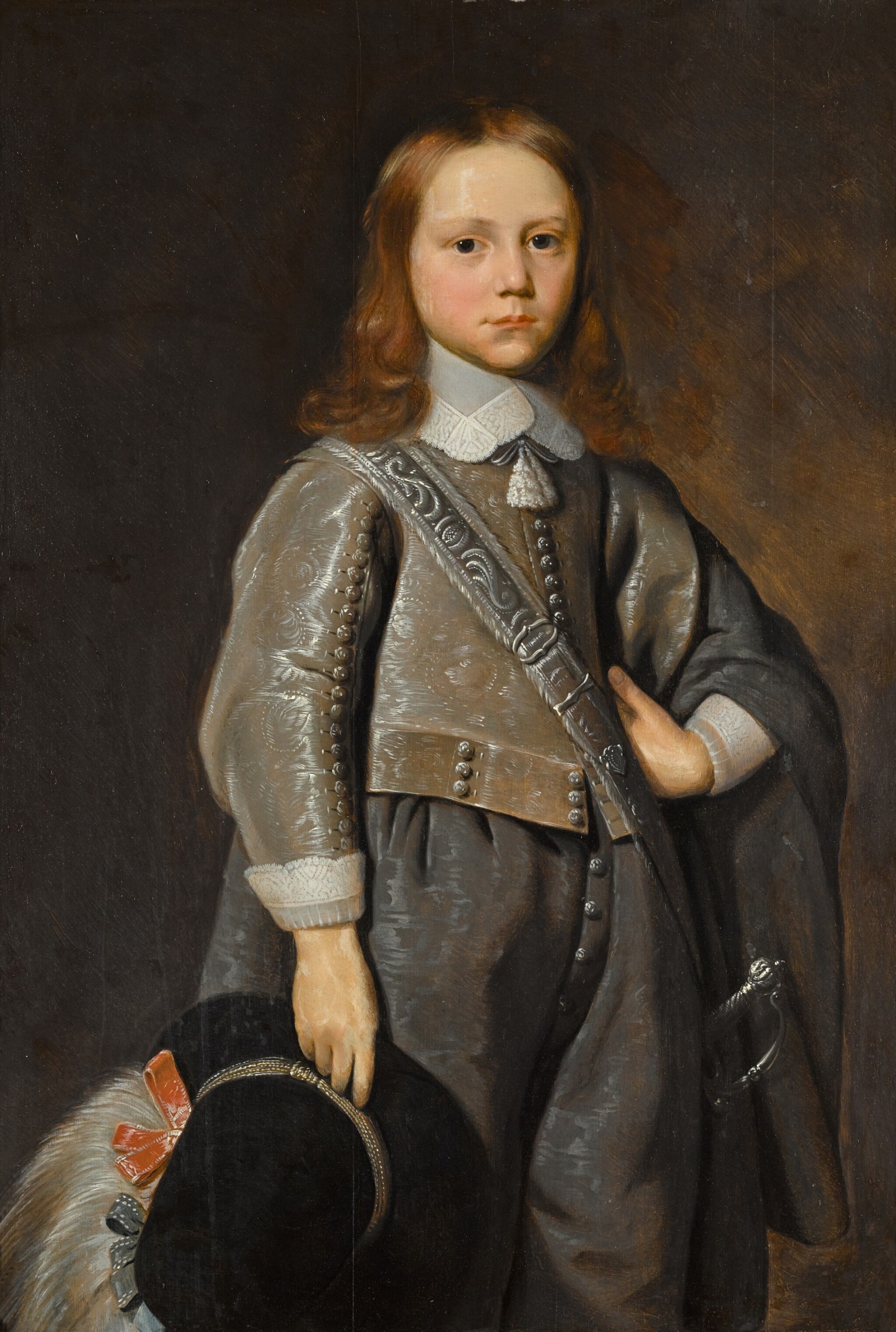 PORTRAIT OF A BOY, THREE-QUARTER-LENGTH, WEARING A GREY EMBROIDERED SUIT AND HOLDING A FEATHERED HAT

The panel is formed of three vertical planks, joined with butterfly battens which are flush with the surface on the reverse. There are associated vertical lines of retouching along both these joins, as well as visible, discoloured areas of retouching in the boy's face and hands. In raking light it is also possible to discern retouching to a curved scratch in the background to the left of the boy's head approx. 16 cm. long, and other small areas of retouching scattered in the background. Inspection under ultraviolet light confirms these and further reveals that there have been two historic campaigns of retouching. Older areas comprise the aforementioned joins and the boy's face and hands. The more recent campaign includes very fine retouchings around his eyelids, the outline of his nose, upper lip, chin and scattered in his clothing and in the background - most notably on the right. The painting presents well and is in overall fairly good condition.

From the late sixteenth century in Holland, there developed a tradition for child portraiture in which the child appears, finely-dressed, often holding a toy of some sort, or accompanied by a pet. Here the boy has clearly been breeched - he no longer wears a dress, as was traditional in Europe right up until the early 20th century for boys of an age that varied between 2 and 8 years old. Indeed, it is possible that this portrait was commissioned to celebrate this rite of passage, depicting the boy in the finery of a silver-embroidered suit, a large feathered hat, and with a sword by his side, celebrating his masculinity.

The artist of this work is so-called because he was a deaf-mute, earning him his byname 'De Stomme.' It is not known with whom he trained, but he is recorded as settling in Groningen, in the Northern Netherlands, in 1643, where he was undoubtedly influenced by other portrait painters from nearby Friesland, such as Wybrand de Geest (1592-after 1667) and Harmen Wieringa (active 1632-50). Although almost all genres of painting were covered by painters from the area, such as the idiosyncratic still-lifes of Margarethe de Heer and the fantastic landscapes of Mancadan, most Frisian artists were portraitists, with many similarities to contemporary British Elizabethan and Jacobean portraits.

De Stomme received many commissions to paint portraits of the families and children of the Groningen nobility, such as the group of Three Children from the Tjarda van Starckenborgh Family (Groninger Museum, Groningen, inv. no. 1940-199),1 dated 6 years after the present work, itself undoubtedly likewise a portrayal of a boy of the local elite.