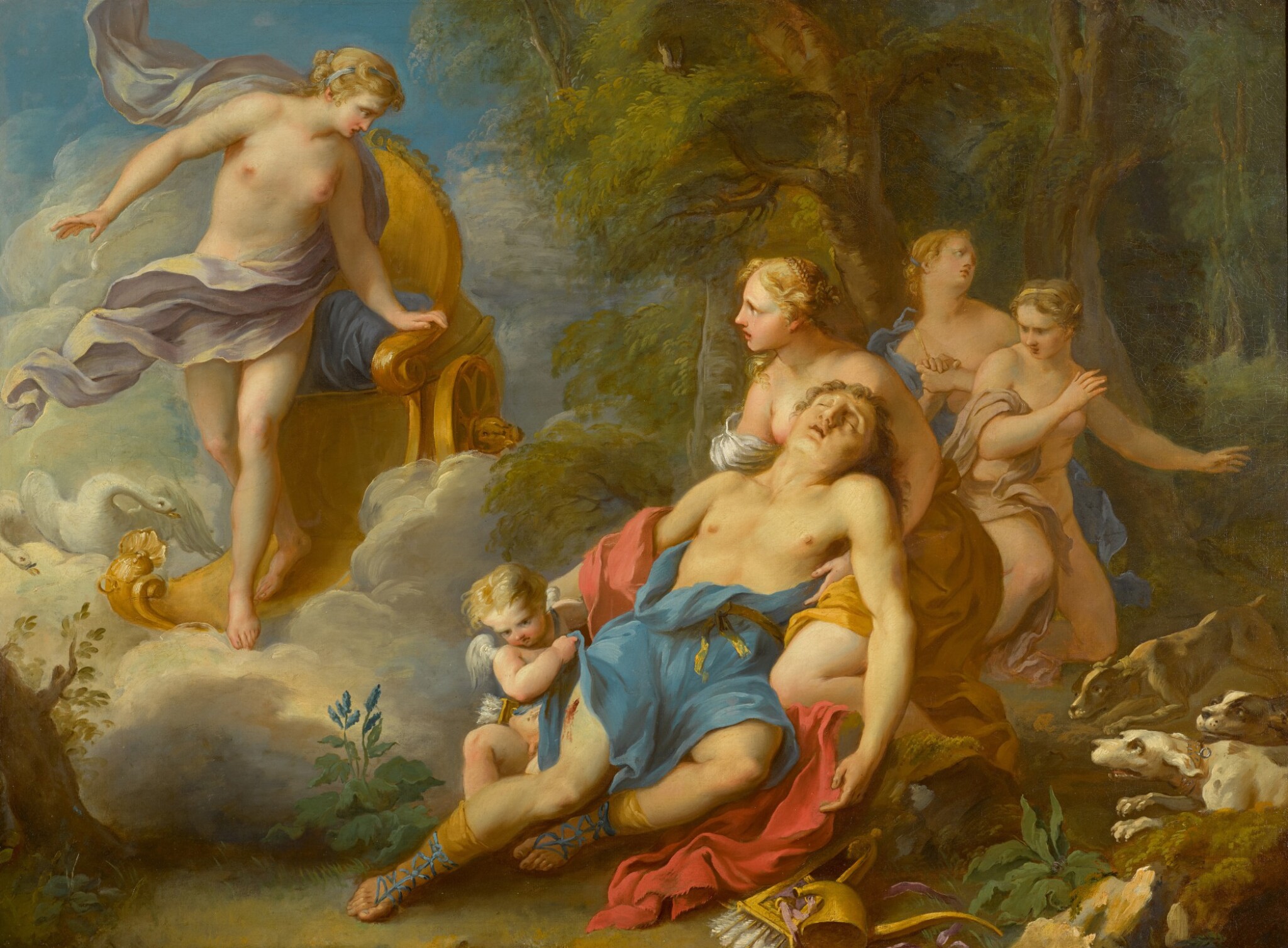 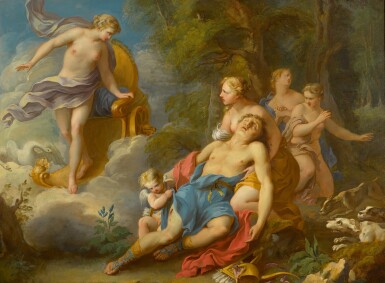 The canvas is lined, the paint surface is clean and the varnish is clear and even. Inspection under ultraviolet light reveals retouching along the left-hand margin, small, scattered retouchings in and around the figure of Venus and her chariot, as well as in Adonis' legs and drapery. There are more concentrated retouchings around the silhouette of the figure holding Adonis, and around his head and shoulder. There are also fine lines of retouching around the contours of the female figures centre right and in the upper right corner. Furthermore two patches of canvas appeared to have been inserted - one in the upper right corner measuring 7 x 7 cm., the other in the ground beside Adonis' foot 4 x 4 cm. These have all been sensitively executed and the painting is ready to hang in its current state.

We are grateful to François Marandet for proposing an attribution to Antoine Boizot (Paris circa 1704-82), on the basis of digital images.

Boizot was a history painter trained in the workshop of François Lemoyne, and his teacher's influence is evident here not only in the painting's style, but in motifs such as Venus' silhouette, which echoes that in Lemoyne's Bather (State Hermitage, Saint Petersburg, inv. no. ГЭ-1222)1 and the face of the putto, which relates to that in Lemoyne's Hercules and Omphale (Musée du Louvre, Paris, M.I. 1086).2 Boizot won the Prix de Rome in 1730, and spent five years at the French Academy there, under the directorship of Nicolas Vleughels, before returning to Paris, where he was admitted to the Royal Academy in 1737 with his painting of Apollo and Leucothoe (Musée des Beaux-Arts, Tours, inv. no. 1803-1-3).3 Despite exhibiting fifty paintings at the Salons between 1737-71, Boizot's name and works have since fallen into obscurity.4

François Marandet draws comparisons between the present painting and two drawings: one of Venus and Cupid, signed by Boizot, which appears to be a study for a painting exhibited at the Salon in 1738 (with Galerie Ratton and Ladrière, Paris); and another of Venus and Mars, bearing a false inscription to Lemoyne (Musée du Louvre, Paris, inv. no. 34865).5 Marandet points out several details in the present painting typical of Boizot's work: the rendering of the figures' anatomy, particularly in the emphasis given to Adonis' knees; the tree trunk behind the figures, with one protruding branch - a motif which recurs in the drawing of Venus and Cupid, and other works; and the general positioning of action at the forefront of the composition, with an absence of focus on the background.

The close dependency of the present work upon Lemoyne's painting has led François Marandet to propose a date early in Boizot's career, most probably in the second half of the 1720s, before the artist's trip to Italy.

4 Boizot's œuvre will be re-addressed in the forthcoming article: François Marandet, 'Antoine Boizot, an artist and a draughtsman rediscovered', in Master Drawings.