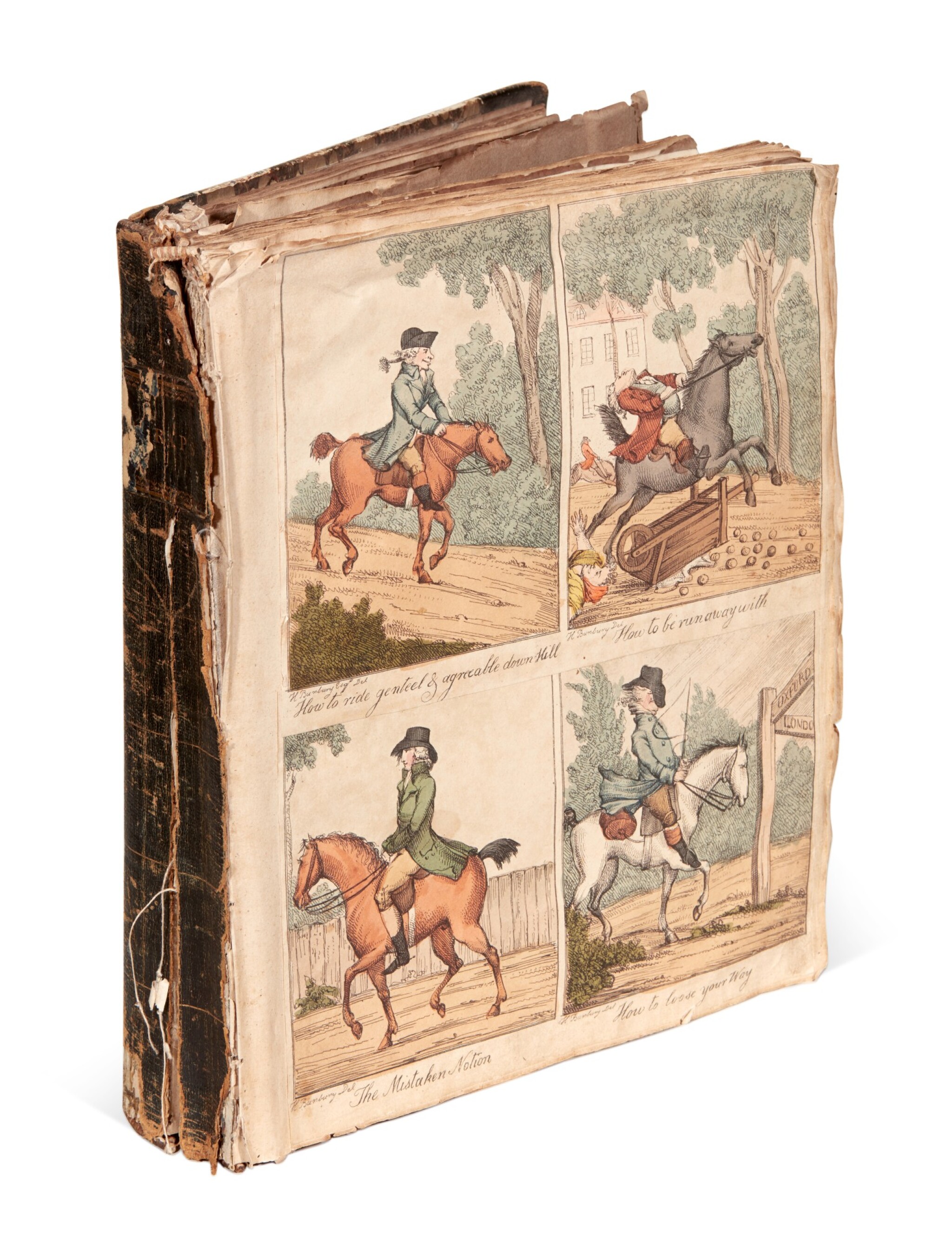 Including four newly discovered drawings by John Constable R.A.: a rural landscape; the original watercolour for his etching The Deserted Cottage; a portrait of the artist’s cousin, Jane Anne Mason, later Mrs James Inglis (1792-1876); and a portrait of the artist’s younger brother, Abram (1783-1862); each contained within an album along with letters, writings, and poems, as well as prints, watercolours and drawings by other hands:

General: The album is in a worn state, with many pages lose and the spine of the book damaged. Although the edges of the sheets are also worn the majority of the works within have been well protected.

The Works by Constable:

A Rural landscape: The colours in this work have been very well preserved, as one would expect from a watercolour that has been kept in an album. There are occasional black spots (possibly foxmarks) visible but these are minor. The work is laid down to a page in the album. This particular sheet is entirely detached from the binding.

The Deserted Cottage: The colours and medium in general have remained very well preserved. Constable's sheet is laid down to an album page which has come loose from the book's blinding. In a raking light it is possible to see slight undulations to the sheet - but this is very minor.

Portrait of Abram Constable (1783-1862): The medium remains strong and easily readable. There are some very minor areas of surface dirt the paper and several unobtrusive stains to the sheet. The sheet is attached at various points verso to a page in the album. The album page is very loosely attached to others in the book.

Portrait of Jane Anne Mason later Mrs James Inglis (1792-1876): The pencil is well preserved. The paper tone has remained very largely original but there is some minor surface dirt and occasional foxmarks. At the extreme left-hand edge, a letter has been sewn into the sheet - this has resulted in the paper having three tiny holes along this edge.

This recently discovered album was compiled by members of the Mason family over the course of much of the 19th century. The Masons were related to the Constables by marriage and the two families were close. The album contains a myriad of material, including amateur watercolours and drawings, engravings after the Old Masters, poems and extensive texts, ranging from jokes and ditties to comments on contemporary events.

For over two hundred years, the album has survived as a time capsule. Leafing through it, the world of Constable’s extended family is partially illuminated, the pages revealing their interests, their tastes and often their sense of fun and humour. Alongside this social history, the album also contains other secrets, namely four previously unrecorded works by John Constable.

Considering these works chronologically, the first is a colourful, oval landscape, which shows a team of horses pulling a cart over a stone bridge, while a man carrying a heavy load walks up into a small village. The work is not only signed but dated, very precisely, 5th April 1794. Constable was only seventeen when he painted this watercolour, and it is among his very earliest surviving works.

Although by 1794, Constable had entered his father’s business and was supervising the family’s windmill on East Bergholt Common, he already had aspirations to become a professional artist. The hills and stone bridge in this watercolour are not immediately recognisable as being East Anglian and it is likely that the young Constable had taken inspiration from a print in order to create this work.

The second work by Constable dates to circa 1797 and has been recognised as the original watercolour from which Constable derived his only surviving etching of the period: The Deserted Cottage (fig 1).1 The previous summer, Constable had stayed with the Allen family, relations who lived at Edmonton in Middlesex. While there, he met John Thomas Smith, a topographer and engraver who was in the process of preparing his book, Remarks on Rural Scenery. When finished, this publication consisted of twenty etchings that depicted rural housing on the outskirts of ever-expanding London. In gathering material for the book, Smith looked foremost at the world around him, but also at the Dutch landscape prints of the 17th century, in particular the works of Jan Both (1615-1652) and Rembrandt van Rijn (1606-1659).

After Constable returned home to Suffolk, he continued to correspond with Smith and the latter took on the role of unofficial tutor and mentor. In January 1797, Constable mentions in a letter that he had sent some drawings of cottages to Smith and he also thanked him for his advice on the technical process of etching. ‘You flatter me highly respecting my Cottages and I am glad you have found one or two among them worthy of your needle. I am obliged to you for the direction you sent me for etching…’2

In the album’s 'Cottage' drawing the young artist, still only twenty-one years old, depicts a ramshackle dwelling in blue-grey washes, yellow watercolour and pen and ink. Seen from a low viewpoint and against a woodland background, weeds and shrubs have self-seeded themselves into the cottage’s thatched roof, while a tumbledown fence and overgrown hedge make up the foreground. Cottages and rural houses would be a theme that Constable would return to often throughout his career.

The third and fourth drawings by Constable in the album are both carefully observed portraits. The first of these is a portrait of Abram Constable (1783-1862), a work in pencil that would seem to relate to Constable’s 1806 oil painting (fig. 2).3 Abram was John’s younger brother and correspondence reveals that the pair enjoyed a warm relationship. Abram had a head for business and it was firstly his willingness and secondly his success at managing the Constable family’s milling and shipping affairs that gave John Constable the freedom to become a professional artist. In later life, when Constable was in need of financial support for himself and his children, Abram was able to step in and help.

Although Abram never married, as a younger man he was both sociable and eligible. In 1811, his mother wrote, 'Abram is our only male amongst the youthful parties.'4 Constable’s portrait captures him as a handsome and romantic figure, with full sideburns, fashionable hair and wearing a high collar and carefully tied stock. A clue as to why the Mason’s may have decided to keep Abram’s portrait in the album can perhaps be found in his surviving correspondence, where he stated that they were 'very worthy people' and 'almost my best friends in the County.'5

The album’s second portrait by John Constable is his sensitive depiction of Jane Anne Mason, later Mrs James Inglis (1792-1876). This pencil drawing is inscribed, possibly by one of the Mason family, in the lower right: J.A.I – by J.C. / St. Mary’s 1809. As noted above, the Masons and the Constables were related. In 1792, William Mason (1768-1840), Jane Anne’s father, married Anne Parminter (1769-1857). She was John and Abram’s father’s first cousin. Jane Anne grew up between St. Mary’s in Church Street, Colchester - of which there is a drawing by her father in the album, and where Constable, according to the inscription, seems to have drawn her - and Jupe’s Hill, which lies only a short walk from the Constable family home at East Bergholt. Her father was a successful solicitor and he acted on occasion as the Constable’s family lawyer. He was a prominent figure in local society and between 1802 and 1813 he served as Town Clerk of Colchester, while in 1818 he was appointed an alderman. Jane Anne married James Inglis, a merchant, in September 1815 at St Mary the Virgin at the Walls, Colchester. The couple had three sons, James, William, who joined the Royal Engineers and died in 1854 during the Siege of Sevastopol, and finally Robert.

Two oil paintings relating to the Mason family by John Constable survive. The first is a 'conversation piece', depicting several members of the family, including it is believed, Jane Anne. That work dates to circa 1805-1806 and is now in the Colchester and Ipswich Museum (fig 3). The second is a single figure portrait of Jane herself, which dates to 1809. That work forms part of the Government Art Collection and currently hangs at 10 Downing Street (fig 4).6

We are grateful to Dr Anne Lyles, Susan Morris and Neil Jeffares for their help when cataloguing this lot.