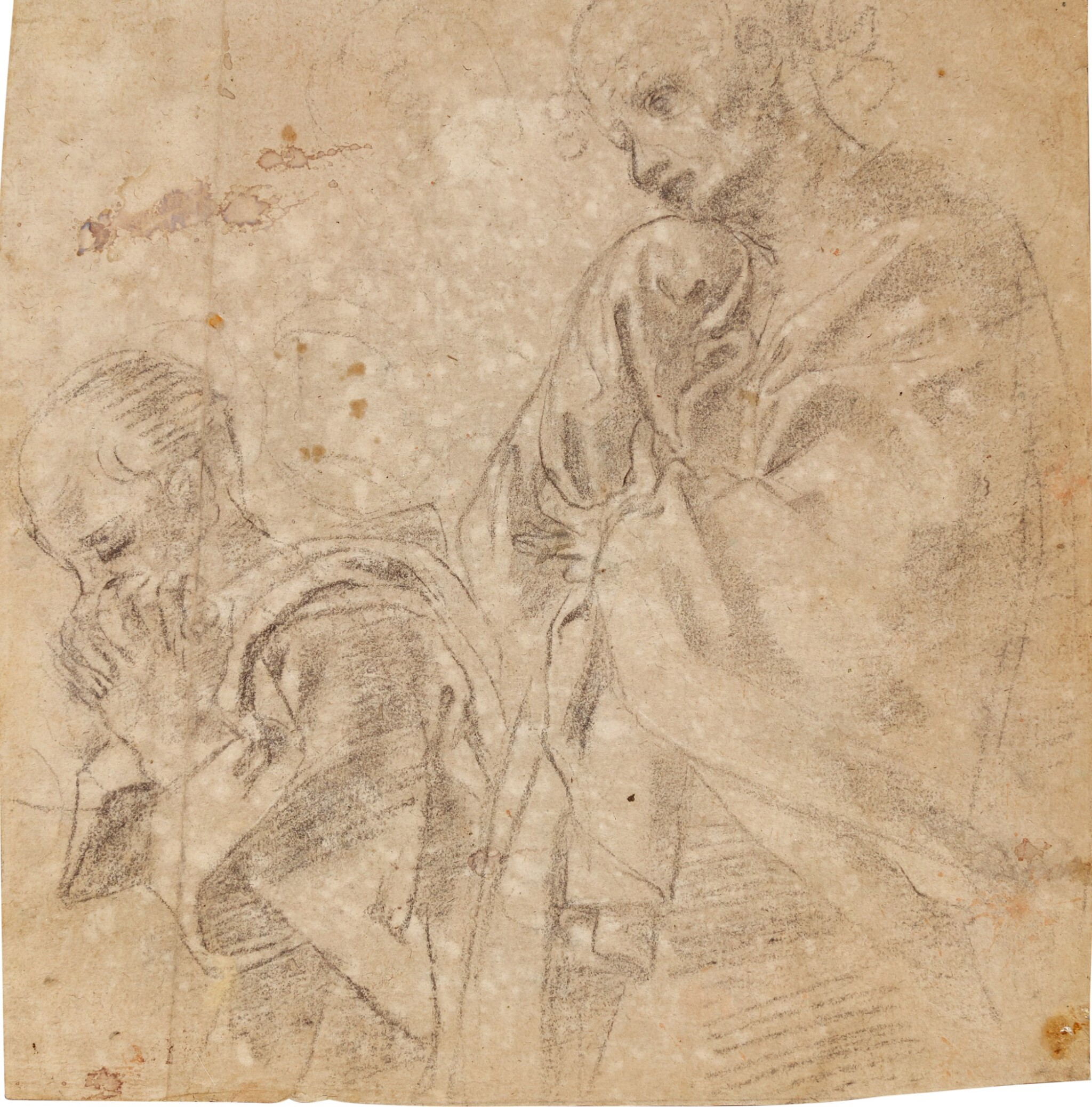 Recto: Two separate studies for the figure of St. John in a Lamentation;

Verso: Study for the figure of the Madonna in an Assumption

There are faint creases at the left margin and at the right corner of the recto. A few brown stains at the lower margin and some in between the two figures. There is light spotting on the recto and verso, possibly caused by mold. On the verso there are two dark ink spots on the figure of the Madonna. A few other minor stains scattered throughout. Museum mounted in two sheets of plexi-glass. Sold framed.

The studies on both sides of this handsome sheet most probably relate to projects dating from early in Ludovico's career. The grieving figure of St. John, studied in two different poses, could be an early idea for the apostle in the Lamentation, once in Casa Tanari, Bologna, but recently rediscovered and now in the Metropolitan Museum, New York.1Although the figure of St. John in this drawing is not identical with the corresponding figure in the painting, there are strong similarities in the facial morphology and in the handling of the figure which make the connection very plausible. The right-hand study shows the figure half-length, while that on the left concentrates just on the head and shoulders, indicating an interest in creating a composition in which the figures were to appear half-length or even less, exactly as in the Metropolitan Museum Lamentation, where the body of Christ in the foreground is the prime focus.

Christiansen (loc.cit.) argues for an early dating for this painting, circa 1582, at the moment of the formation of the Carracci academy. The very experimental quality of the painting is evident in the unconventional representation of the body of Christ.  A red chalk study, drawn from life, has been associated with this figure2, but whether that drawing should be attributed to Annibale or Ludovico is still the subject of scholarly debate. As Christiansen explained3 the primary function of life drawing in the Carracci academy was to investigate problems of representation, and these studies were not necessarily preparatory for a particular painting, but formed a repertory to be used for future reference. The figure of Christ is substantially altered in the final painting, where Ludovico has adopted a less dramatic foreshortening which allows the depiction of the other figures more or less aligned behind the body of Christ in a crowded and narrow space. The style of the present drawing is comparable with Ludovico's early work and there are close similarities with the treatment of the folds in the draperies in the painting, the work of a young but powerful and ambitious artist.  No other drawings besides these two have as yet been associated with the impressive Lamentation, and it is therefore difficult to understand fully the evolution of the composition.

The verso appears to be a study for the figure of the Virgin in an Assumption. It cannot be connected to a known painting, but it shows the same early stylistic characteristics as the recto.