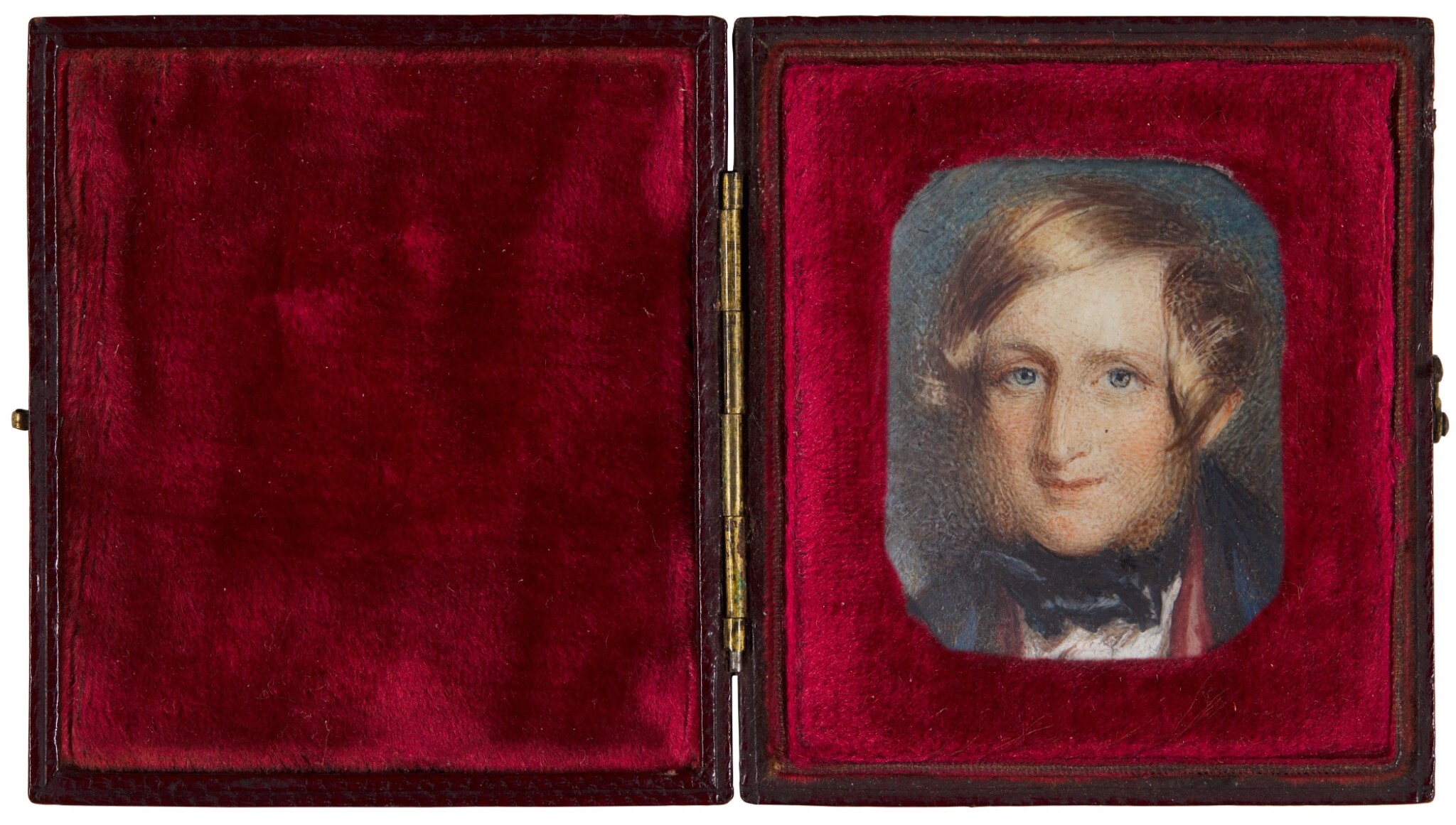 Watercolour and bodycolour on ivory, housed in a red leather case;

The miniature is generally very well preserved. There is a suggestion of a diagonal scratch running from the top left hand corner down toward the face, however this is very minor indeed. The leather case is in good condition. The miniature is unglazed.

This lot contains ivory. Due to recent changes in the laws of many countries (e.g. US, France) Sotheby’s recommends that buyers check with their own government regarding any importation requirements prior to placing a bid. For example, US regulations restrict the import of elephant ivory and prohibit the import of African elephant ivory. Please note that Sotheby’s will not assist buyers with CITES licence applications where a buyer elects to either collect or arrange their own shipping, nor will Sotheby’s assist with the international movement of ivory by air, either as freight or through hand carry. Sotheby’s shipping will only assist in shipping the lot to either domestic UK or EU destinations, where delivery is made by road transport. A buyer’s inability to export or import these lots cannot justify a delay in payment or sale cancellation.
Geoffrey W. Kippax (1926-1991);
by family descent to the present owner
James S. Dearden, John Ruskin: A Life in Pictures, Sheffield Academic Press, 1999,  pp. 27-28, no. 8, pl. 3

This portrait is the first known image of the adolescent Ruskin and it was first recorded in the book John Ruskin: A Life in Pictures (1999). In this publication the author, James Dearden wrote: 'This is Ruskin the published poet, the writer on geology, the champion of Turner. In 1836 Ruskin was attending the Rev. Thomas Dale's lectures on early English literature at King's College, he was taking watercolour lessons from Copley Fielding and drawing lessons from Charles Runciman. In October he matriculated at Christ Church, Oxford, and in December he took his final examinations at King's College..... The circumstances under which the miniature was painted are not recorded. However, in 1836 preparations were being made for Ruskin to go to Oxford in January of the following year. He was to be accompanied by his mother who would live in Oxford during his terms at Christ Church; his father would remain in London or travelling the country in connection with his sherry business, joining his family at Oxford when he had the opportunity. I would suggest that the miniature, in its leather case, was painted as part of these preparations, for John James to have with him during his separation from his family.'1

We are grateful to Professor Stephen Wildman for his help when cataloguing this lot.