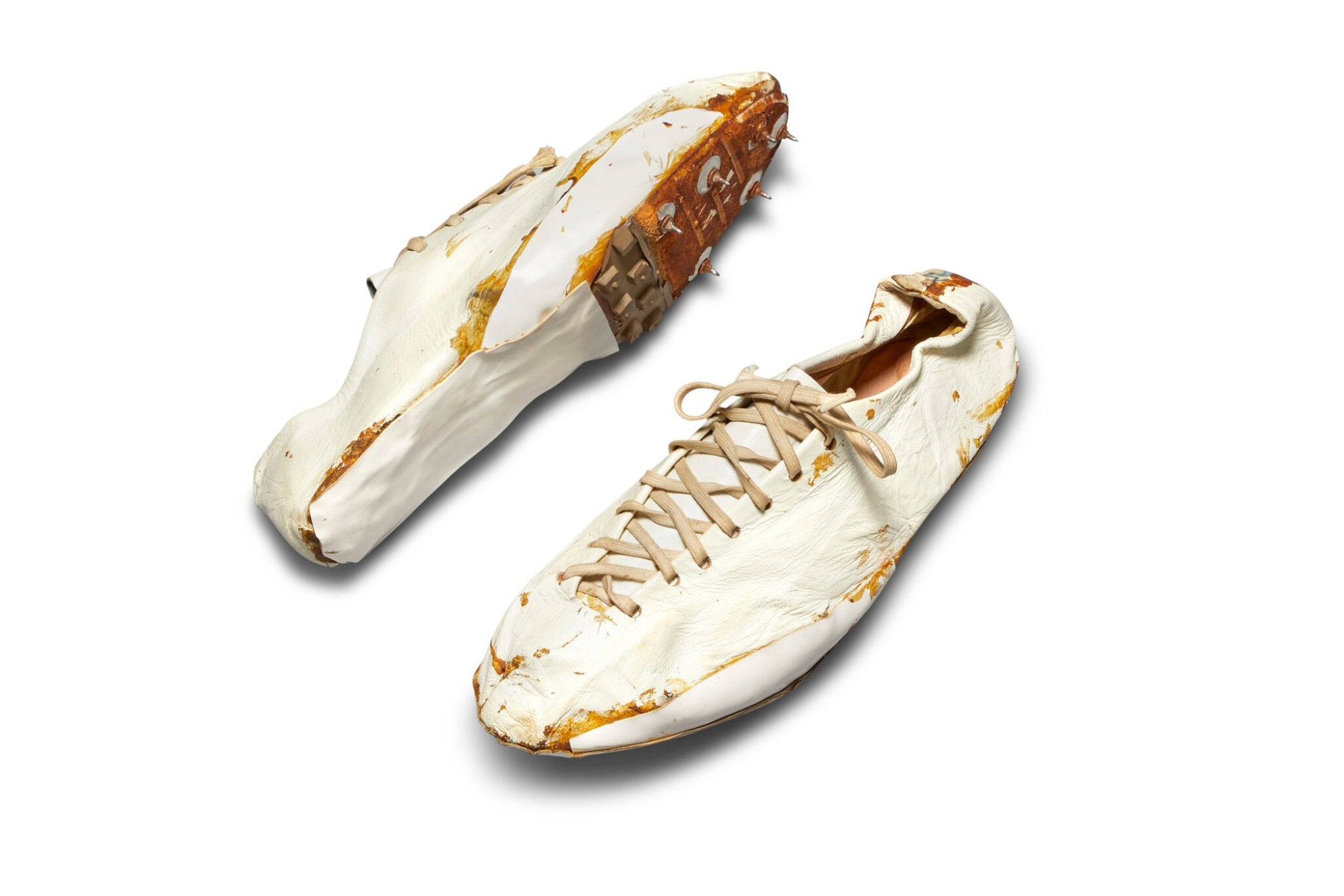 Shoes date to early 1970s, with most recent modification completed in 1974 (stipulated in letter)

The following condition report has been provided by Friton Design, LLC., 8550 SE McLoughlin Blvd., Milwaukie, Oregon 971-219-6552, mikefriton@fritondesign.com, a contractor who was retained for the purposes of producing this condition report.

The shoes are in great overall condition. There is some wear with the exception of the new leather and waffle outsole on the right shoe. The leather is still in good condition with slight stiffening from age. The glue has discolored from oxidation and age.

Please note this lot has an Irrevocable Bid.

Bill Bowerman is the heart of Nike. Bowerman, one of Nike’s founders, was one of the greatest innovators of his generation in regards to shoe ingenuity and design. Obsessed with weight and performance, Bowerman would build shoes for his University of Oregon runners from scratch, often using an assemblage of raw materials. This pair, made by Nike’s co-founder exclusively for his runner John Mays, represents an important chapter in the origin of one of America’s greatest companies, Nike.

The shoes themselves, produced in the early 1970s with its most recent modification in 1974 are glued together, as opposed to stitched. The brown glue can be seen throughout the uppers, especially where layers of material are held together. Unfortunately, as a result of this intensive and careful process – often undertaken in places without the proper ventilation – Bill would later suffer from nerve damage that would require him to walk with a cane.

The shoes do have their original laces, and the aglets are frayed from wear. The lace-holes were hand-punched by Bowerman, and there are a total of 14 of them on each shoe. On the heel, the shoes say “MAYS” in Bill Bowerman’s handwriting. Mays was a runner at the University of Oregon in the early 1970s, and was Steve Prefontaine’s teammate and good friend. Upon graduating, Mays became the Sprint Coach at the University of Oregon.

Notably, the soles on these shoes do not match one another. The right shoe’s sole has waffles on it. The waffles of course, represent an important moment in the history of footwear, as Bill invented the design after being inspired by his wife’s waffle iron. The spikes do show wear, but the waffles and the back half of the right shoe appear mint. The reason for this is that Bill was constantly tinkering and modifying his shoes, and Bowerman added the waffles and a strip of white material to the right shoe for Mays to test (as discussed in the accompanying letter), which he never got around to.

The shoes additionally come with a graded letter from Bill Bowerman, evaluated by PSA/DNA as GEM MT 10.

John - the right shoe interval heel is the one we are testing for wear.

Can you write on this sheet the approximate mileage or yardage you put on this on the track.

Call me occasionally & tell me what the situation is