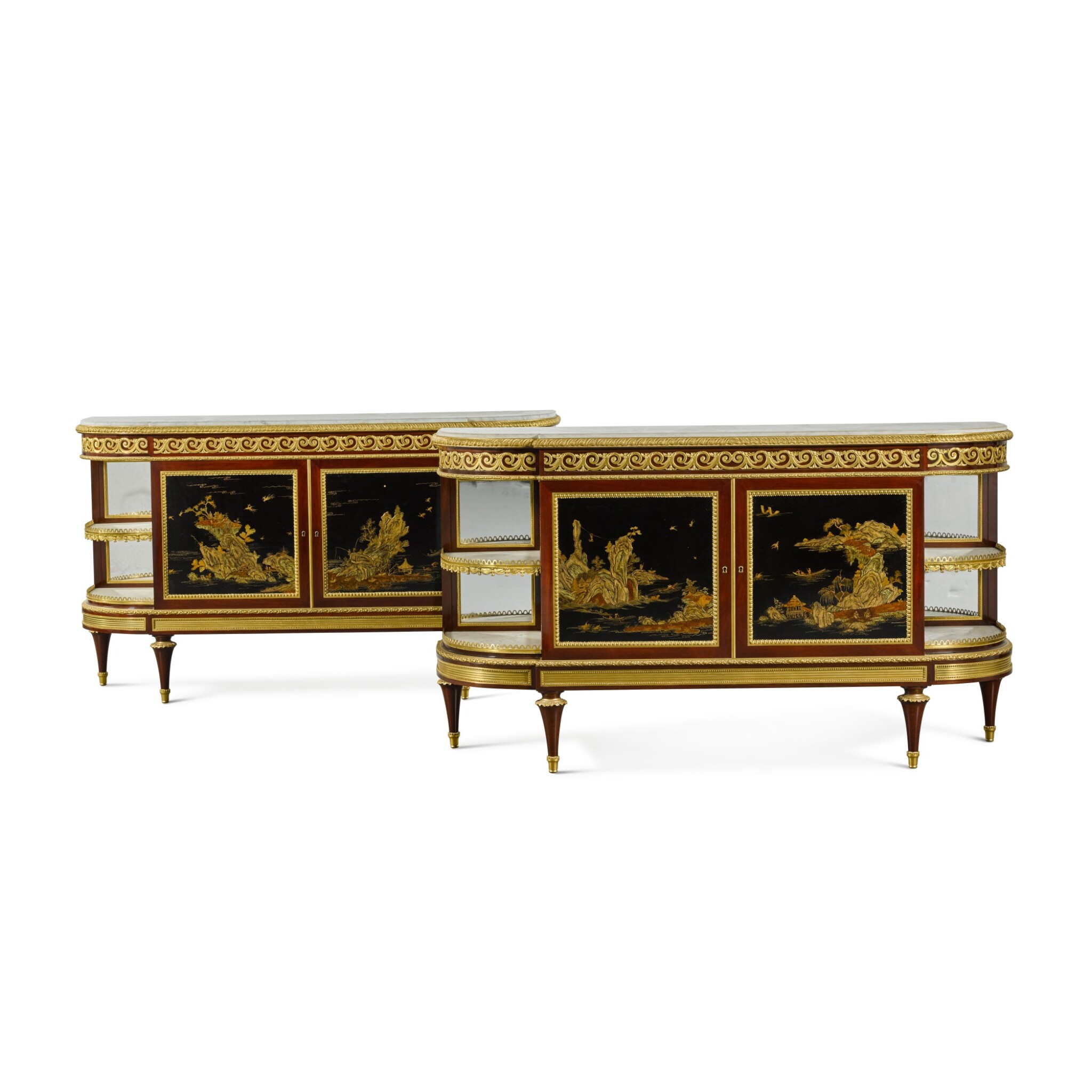 the grey veined marble top above a Vitruvian scroll frieze, two doors flanked on each side by two shelves each with a grey veined marble top, the doors paneled with black lacquer depicting landscapes by the mountains and sea opening to one shelf, stamped two times each 'PERREAU', bearing stamp crowned EU

To request a condition report for this lot, please contact  adele.bourbonne@sothebys.com

Not only these commodes epitomize the Louis XVI style and the fascination for the Orient in the 18th century through the use of lacquer panels, they are one of the few examples of Perreau’s work, a highly-skilled ébéniste who was active in France from the mid-19th century.

Unfortunately, there is little, if not nothing, known about Perreau. There is so far recorded only one other work stamped by Perreau, a Louis-Philippe coromandel and gilt-bronze writing and dressing table, circa 1840, sold at Sotheby's London, 2 November 1990, lot 17. Tantalisingly, this example bears as well a marque au feu for the château d'Eu.

The design of the present pair of commodes ‘à l'anglaise’, or ‘à encoignures’, relates closely to the model by Martin Carlin, reçu maître in 1766, supplied between 1775 and 1780 to the home of the Marquise de Brunoy, née Françoise-Emilie de Pérusse des Cars. This commode by Carlin, today in the Louvre (inv. no. OA 5472) is illustrated in D. Alcouffe, A. Dion-Tenenbaum et A. Lefébure, Le Mobilier du Musée du Louvre, Tome 1, Dijon, 1993, p.239.

Related pairs of commodes from the 19th century and after Carlin’s model were sold recently, one pair at Christie’s London, A Golden Age, 16 October 2018, lot 175 ($112,500), and another, by Henri Dasson, sold at Christie’s London, The Collector, 15 July 2020, lot 258 (£100,000). A further pair of commodes by Henry Dasson is illustrated in C. Payne, Paris Furniture: the luxury market of the 19th century, 2018, p.204. These examples as well as the present pair are a testament of the art of marrying in the 18th and 19th centuries European ébénisterie of the finest quality with the exoticism of oriental lacquer, which from the 18th century, was considered to be among the most prestigious and expensive materials to be used in furniture production.