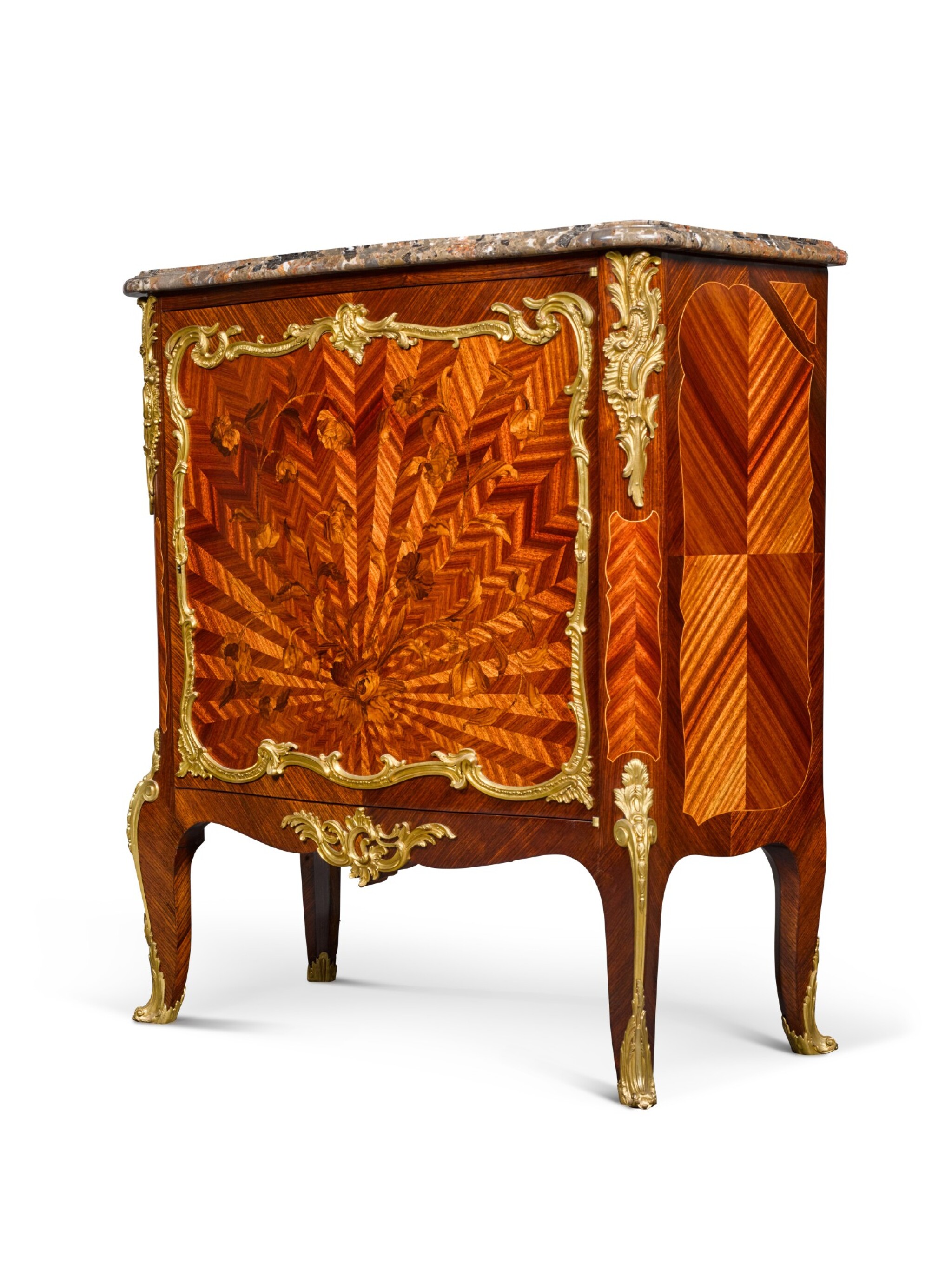 veneered with oeil de vermeil and bois satiné, the brèche nouvelle marble top above a door opening to reveal one shelf, signed to the top handside corner mount ‘Linke’, the inside of the lock signed ‘CT Linke’ and ‘1688’

In overall excellent condition. The marble top with very minor scratches and very minor chipping to the edges, as expected. Minor veneer repair to the left front leg. Ready to place. One key.

stamped on the top and at the back 'Made in France'

The present side cabinet or meuble d'appui, following a model by Linke not often seen on the market, reflects the brilliance of François Linke's marquetry and parquetry work balanced with refined and elegant gilt-bronze mounts. His workshop was known to have used many exotic woods, predominantly satiné, mahogany, kingwood, tulipwood and padouk, all readily available from the French colonies at the time. The radiating veneer of oeil de vermeil, a wood grain close to that of padouk, here creates interesting three-dimensional effects. An almost identical meuble d'appui was offered at Christie's London, European Furniture, Works of Art, Tapestries and Carpets, 11 February 2004, lot 474.

Linke, born on 17th June 1855 in the small village of Pankraz, was perhaps the most important Parisian ébéniste operating in the last quarter of the 19th century and the early years of the 20th century. First trained in Czech Republic, he moved to Paris in 1875 and set up an independent workshop at 170, Rue du Faubourg-Saint-Antoine in 1881, and later on at 26, place Vendôme.

Linke's business thrived and his workshops produced luxurious furniture of the very highest quality and utilised the very best of materials. His work was in demand by a wealthy client base from around the world - this fame coming, in part, through his very successful representation at the 1900 Exposition Universelle in Paris for which he received the gold medal from the jury. He exhibited at the World’s Fair in St. Louis in 1904 and in other parts of the world including South America. He flourished and remained active until the middle years of the 1930s and died in 1946. In 1906, in recognition of his great success and talent in design, he was awarded the highest distinction of France, the Croix de la Legion d'Honneur.