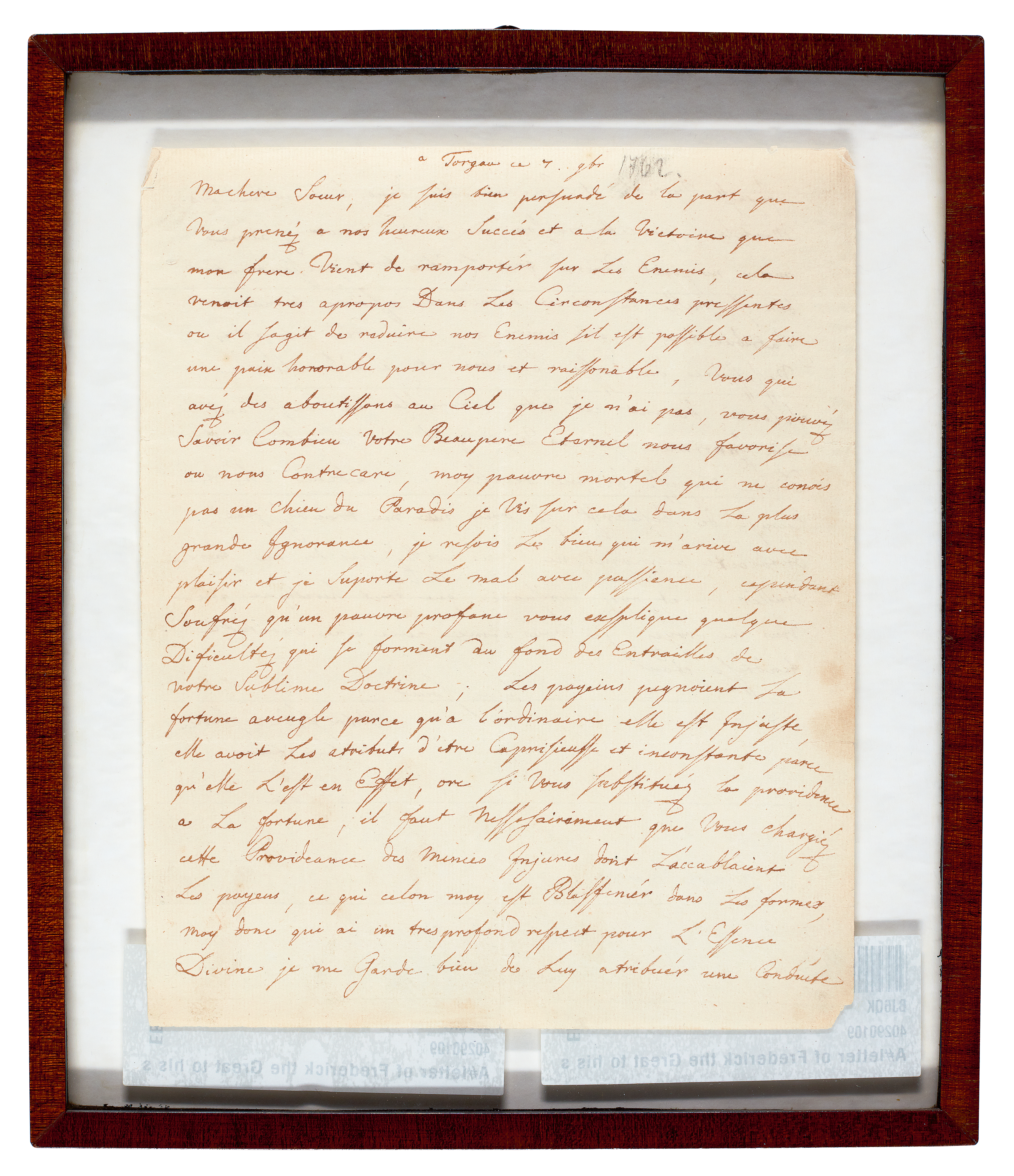 Fine autograph letter signed ("Federic") to his sister Anna Amalie, about his lack of religious faith and the victory over the Austrians at the Battle of Freiberg, 7 November 1762

written in his idiosyncratic French, whilst expressing confidence that Amalie will share his joy at the happy news of their brother’s victory on the battlefield (on 29 October), which will hopefully conclude with a piece honourable and fair to both sides, he admits that he does not share her faith in the Almighty and does not know whether God takes their side or not; for himself, he can only repay good with good and suffer the bad with patience, noting that, while peasants paint a picture of a blind and uncaring god because to them fate is usually unjust and capricious, he feels that blaming God for misfortunes is a form of blasphemy, adding that he has a deep respect for the Divine Being, presuming that He does not concern himself with the details of human affairs, that any reverse stems instead from secondary causes, although the Almighty has not seen fit to apprise him of his mysterious ways

Frederick the Great (reigned 1740-1786) is arguably the greatest King of Prussia, highly successful on the battlefield yet always assuming the mantle of the Philosopher King. He sought to justify D'Alembert's praise on his accession: "philosophers and the men of letters in every land have long looked upon you, Sire, as their leader and model". He corresponded with key religious sceptics such as Voltaire and Rousseau (whom he gave shelter, even though he profoundly disagreed with him). This letter contains a clear statement by Frederick of his own profound scepticism. The subject dominates this letter, even though it is ostensibly prompted by an important military victory. His addressee and younger sister, Anna Amalie of Prussia (1723-1787), was Princess-Abbess of Quedlinburg, although her primary interests were musical rather than religious. Like Frederick himself, she composed concertos and chamber music, rather than Italian operas like their niece Anna Amalie of Weimar.  The victory of Prince Henry (1726-1802) at Freiberg in Saxony was the last great battle of the Seven Years' War (1756-1763), but it maintained a stalemate rather than achieving outright victory. By this time Austria and Prussia were both bankrupt and greatly in need of the reasonable settlement sought by Frederick as much as by Maria Theresa.

For an earlier autograph letter by Frederick the Great, please see our sale, Collection of a Connoisseur: History in Manuscript (L20314): open for bidding online from 8 July 2020.