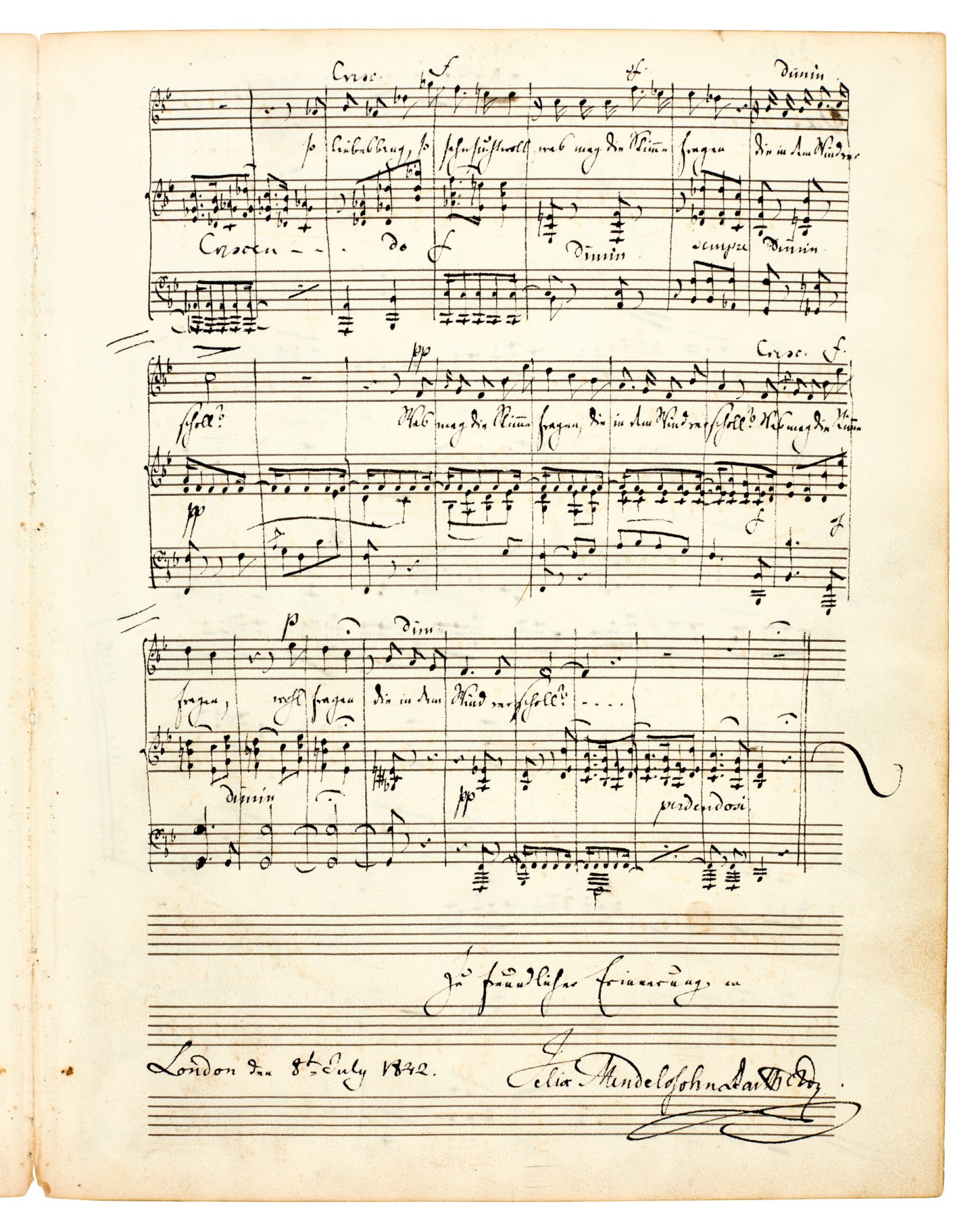 notated in dark brown (nearly black) ink on up to four 3-stave systems per page, in B-flat major, marked "Andante", with an autograph correction in bar 5, containing a different text for the second verse from that found in the printed scores, together with many changes to the accompaniment in the third verse and differences to the dynamic markings throughout

THIS IS A HITHERTO UNRECORDED MANUSCRIPT DATING FROM 1842, DIVERGING IN MANY PLACES FROM THE STANDARD EDITIONS OF MENDELSSOHN'S SONG. The song was only published four years later.

The text in the second verse is completely different from the published versions, including the printed scores and Alfred Böttger's original poem. Here the text reads: "Und aus dem blauen Flieder ruft ohne Rast und Ruh, ihm tausend Liebeslieder die Braut als Antwort zu". There is a striking harmonic shift to a G major seventh chord, two bars before the final phrase in the voice, earlier than in the editions by Julius Rietz (c.1880) and Max Friedländer. It also contains revisions to the accompaniment in bars 34-35 and 50, and different chords in bars 20, 24, 27 and 31.

Mendelssohn's composing manuscript, now in Krakow, is dated 20 April 1841, but the song was not published until 1846, both as an octavo insert in an edition of Böttger's poems, and by J.J. Ewer of London as "I hear a small Bird calling". It is not known what control the composer exerted over either edition. Klemm of Leipzig published it again as no.1 of Zwei Gesänge, still without opus number, in 1849, after Mendessohn's death. Some but not all of the alterations found in this manuscript are confirmed in a later autograph given to Jenny Lind in 1845; see J.A. Stargardt's sale on 21 & 22 March 2006, lot 367. That manuscript contains the same text for the second verse as found here, but not all the musical changes.

This manuscript is not recorded in the Thematisch-systematisches Werkverzeichnis (2009), ed. R. Wehner: song no. K 107.