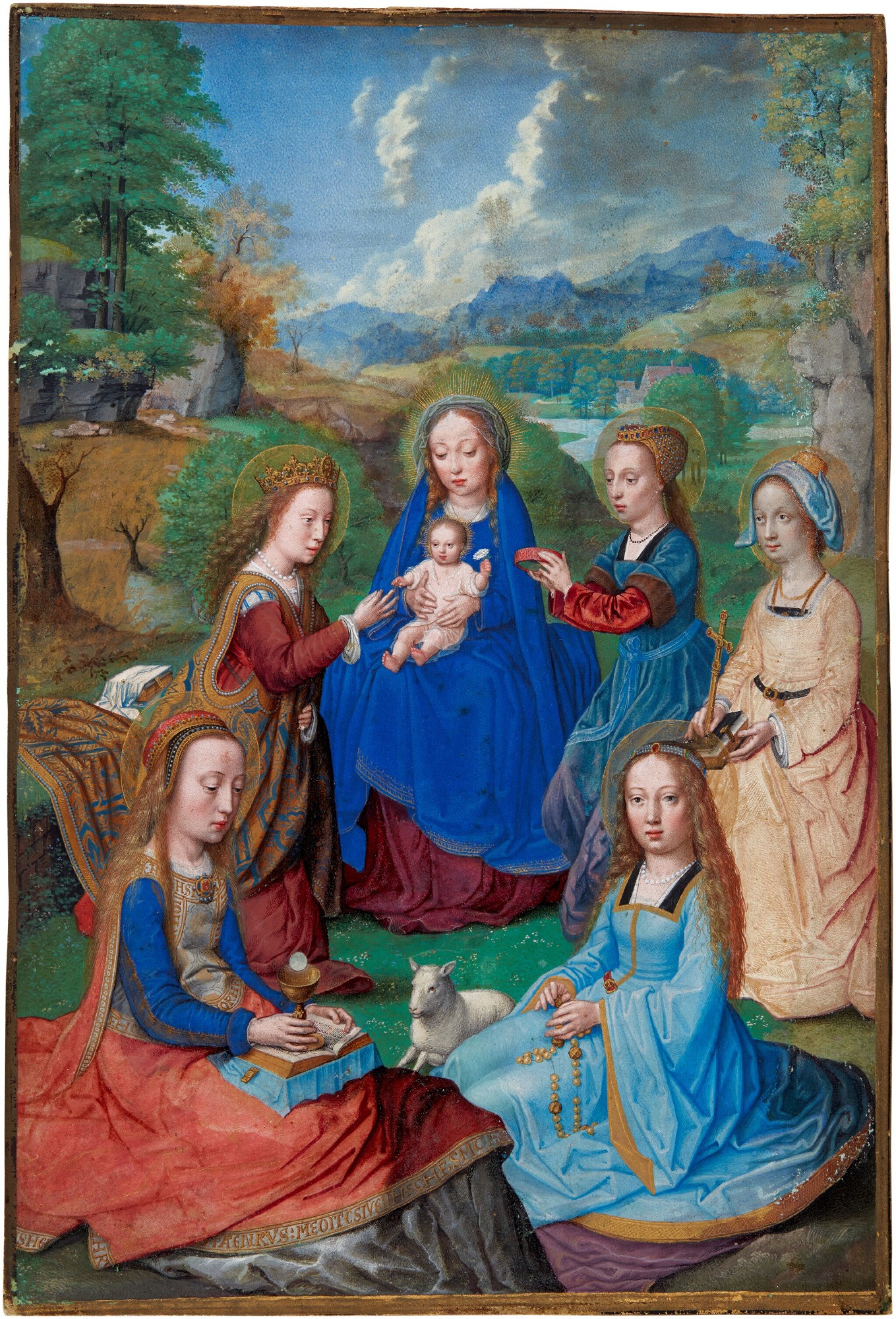 Virgo inter virgines (The Virgin Among Virgins), in a landscape [Bruges, c.1530s–40s]

a miniature on vellum, laid down on wood, c.280×190mm including a narrow gold border on all sides, depicting the Virgin Mary seated with the Christ-child on her lap; he holds a white carnation(?) in his left hand and with his right reaches to place a gold ring on the finger of St Catherine, who kneels to the left; she is crowned, dressed in a rich blue and gold brocade, and has placed a book on a grassy bank behind her; in front of her St Barbara(?) sits holding a chalice above which a wafer hovers on the open pages of a Breviary in a chemise binding; she is finely dressed with lettering around the edges; St Agnes sits in the right foreground looking directly out at the viewer, holding a rosary and with a lamb at her side; behind her St Margaret sits with a book and the cross with which she escaped from the dragon’s belly; and to her side sits St Dorothy(?) who leans towards the Christ Child with a red circlet; overall in very fine condition: the upper right corner has lifted from its support, and there are a few small areas of pigment loss near the edges, notably in the landscape behind St Catherine; the white clouds with grey undersides are unusual: it could be that this area has been retouched, or the grey may be lead white that has oxidised; the draperies of St Dorothy(?) are unusual in that they change from blue to purple at about the level of the knee: the blue must be original, however, as it can be seen through the halo of St Agnes, so it may be that the purple was intended as a base layer, and the artist for some reason failed to continue the blue overpaint below the level of the knees; overall in very fine condition

AN EXCEPTIONALLY FINE MINIATURE ON AN UNUSUALLY GRAND SCALE, BY SIMON BENING, "THE GREATEST MASTER OF THE ART OF ILLUMINATION IN ALL OF EUROPE", AND PROBABLY A SECOND ARTIST, THAT HAS NOT BEEN SEEN BY ART HISTORIANS FOR MORE THAN A CENTURY

Adalbert Freiherr von Lanna (1836–1909), of Prague, distinguished collector and connoisseur (of whom Frits Lugt wrote, ‘perhaps the second half of the nineteenth century did not have another who was endowed with such a sure eye’); sold by Lepke in Berlin, 21–28 March 1911, lot 338; probably bought at the sale by Heinemann, the Berlin art dealer: seen in his possession by Max Friedlander in 1913 (as recorded in the online database of the RDK – Netherlands Institute for Art History); apparently part of his private collection, and taken to Geneva during the War; by descent to a grandson who gifted it to the current owner.

This is a version of an subject usually called the Virgo inter virgines, in which the Virgin Mary is surrounded by other virgin saints, often with the Christ-child about to place a ring on St Catherine’s finger in a ‘Mystic Marriage’ (see lot 76). The present composition is believed to derive from a lost painting by Hugo van der Goes (d.1482), of which there are versions in the Royal Collection (RCIN 407817); the Alte Pinakothek, Munich (Inv. 13191); formerly in the collection of Graf Arco-Valley, Munich (Inv. A.103); and, closest of all, a panel attributed to a follower of Adriaen Isenbrandt (d.1551), a Bruges contemporary of Simon Bening, now in the Galleria dell’Accademia Nazionale di San Luca, Rome. The latter is the same as the present picture in almost every detail, except that the Virgin’s has a rug under her feet, St Barbara does not have the chalice and host on her book, and St Margaret’s dress is green instead of pink.

The figure in the left foreground of all these pictures is clearly based on a drawing (or the lost painting for which it was a study) attributed to van der Goes at the Courtauld Institute (inv. D.1978.PG.314), and she subsequently appears in many guises; the drawing is the point of departure for a 2003 study of the use of Flemish workshop patterns by Maryan Ainsworth. The pattern appears twice in the Grimani Breviary: once as a single figure, St Barbara (f.828v), and once as part of a Virgo inter virgines ensemble (f.719v). The latter version of the subject, by Simon Bening, is by far the most closely-related manuscript illumination to the present miniature, both in terms of its composition and its style (see Illuminating the Renaissance, p. 422, for the attribution; see The Grimani Breviary, 1972, pl. 91, for a colour reproduction).

Studies of the Grimani Breviary and related works epitomise the complex issues involved in the attributions of early 16th-century Flemish illuminations, an exercise made even more difficult by the twin facts that on a major commission such as the Breviary the main illuminators sometimes contributed to each other’s miniatures, and also created greater harmony within the volume as a whole by adapting their own styles (consciously or not) to those of their collaborators. The artist(s) of the present painting worked on a much larger scale than is normal within manuscripts, allowing greater scope for fine detail and nuance in both the figures themselves and their landscape setting, making comparisons with smaller works especially delicate. Simon Bening’s style – figural and landscape – and its development over time, are better understood than many, thanks to a significant body of work including several dated examples and some large-scale ones – notably the leaves of "The Portuguese Genealogy", datable to c.1530–34 (BL, Add. MS 12531, ff. 4, 5, and 10; Illuminating the Renaissance, no. 147, and www.bl.uk/manuscripts/).

Specialists of late medieval Flemish panel painting and manuscript illumination consulted during the preparation of this description are divided between those who confidently see the hand of Simon Bening (with which we concur), and those who see a closer overall connection to Gerard David – the latter is not surprising: as Thomas Kren has noted of Bening, ‘The Bruges painter and illuminator Gerard David had a strong influence on his art, also providing inspiration for figure types and sources for compositions’ (Illuminating the Renaissance, p. 447). All agree that more than one artist probably contributed to the miniature; the Virgin Mary being the most certainly by Bening, and St Margaret being the figure least like his typical work: she is painted with essentially the same brushwork as the other figures, yet has a comparatively grey complexion, and her features – especially the eyes – are treated differently. Similarly, the landscape is attributable to Bening, yet we have not been able to find any precise comparison for the sky, with its stippled brushwork and the naturalistic use of grey for the underside of the clouds, suggesting that the sky may have been retouched at a later date, a suggestion that is not, however, supported by examination under UltraViolet and InfraRed light. InfraRed light also shows clearly that the sleeve of Dorothy has very different underdrawings to all the other draperies.

The impressive scale of the work is significant. As Georges Dogaer expressed it (Flemish Miniature Painting in the 15th and 16th Centuries, Amsterdam, 1987, p. 172):

‘Bening’s miniatures differ in appearance from those painted by his contemporaries. In Simon’s work the miniature becomes a ‘panel’ in its own right – despite its reduced size – as complete as anything then achieved in the art of painting. In his scenes the compact but lively figures always enact their roles naturally. His compositions are soundly structured, their space is well organised and the colouring is unusually brilliant. He occupies a distinguished position in the history of landscape painting. With him Flemish, and especially Bruges miniature painting of the first half of the sixteenth century, reached its apogee.’

The large scale of the picture makes it almost certain that it was always intended as a free-standing devotional image, like a panel painting, and not meant for insertion in a book. While considerable scholarly attention has been devoted to the work of Gerard David (primarily a panel painter) in manuscripts, much less is known about Simon Bening’s work as a panel painter, yet it is surely significant that he produced a number of free-standing diptychs and triptychs; that his Flemish contemporary Denis Harduyn described him as a master both of illumination and of the oil medium; and that at least one panel painting in oils is attributed to him (Illuminating the Renaissance, no. 142).

This previously unknown painting promises to play a central role in future assessments of Flemish illumination of the first half of the 16th century, including developments in landscape painting; Bening’s style; the relationship between his style, and use of patterns, and those of panel painters including Gerard David; the transfer of patterns from Hugo van der Goes to Simon Bening via Gerard David and Adriaen Isenbrandt; and working practices in which more than one painter contributed different parts to a single image. But regardless of its art historical importance, its quality and condition are extraordinary.

The miniature is unpublished, except for the 1911 auction catalogue:

A PDF is available on request from Sotheby’s Books Department

G.L. Mellini and M. Salmi, The Grimani Breviary, Reproduced from the Illuminated Manuscript Belonging to the Biblioteca Marciana, Venice (London, 1972).

Among several specialists, we are especially grateful to Joris Corin Heyder and Mara Hofmann for their opinions and kind help with this description.