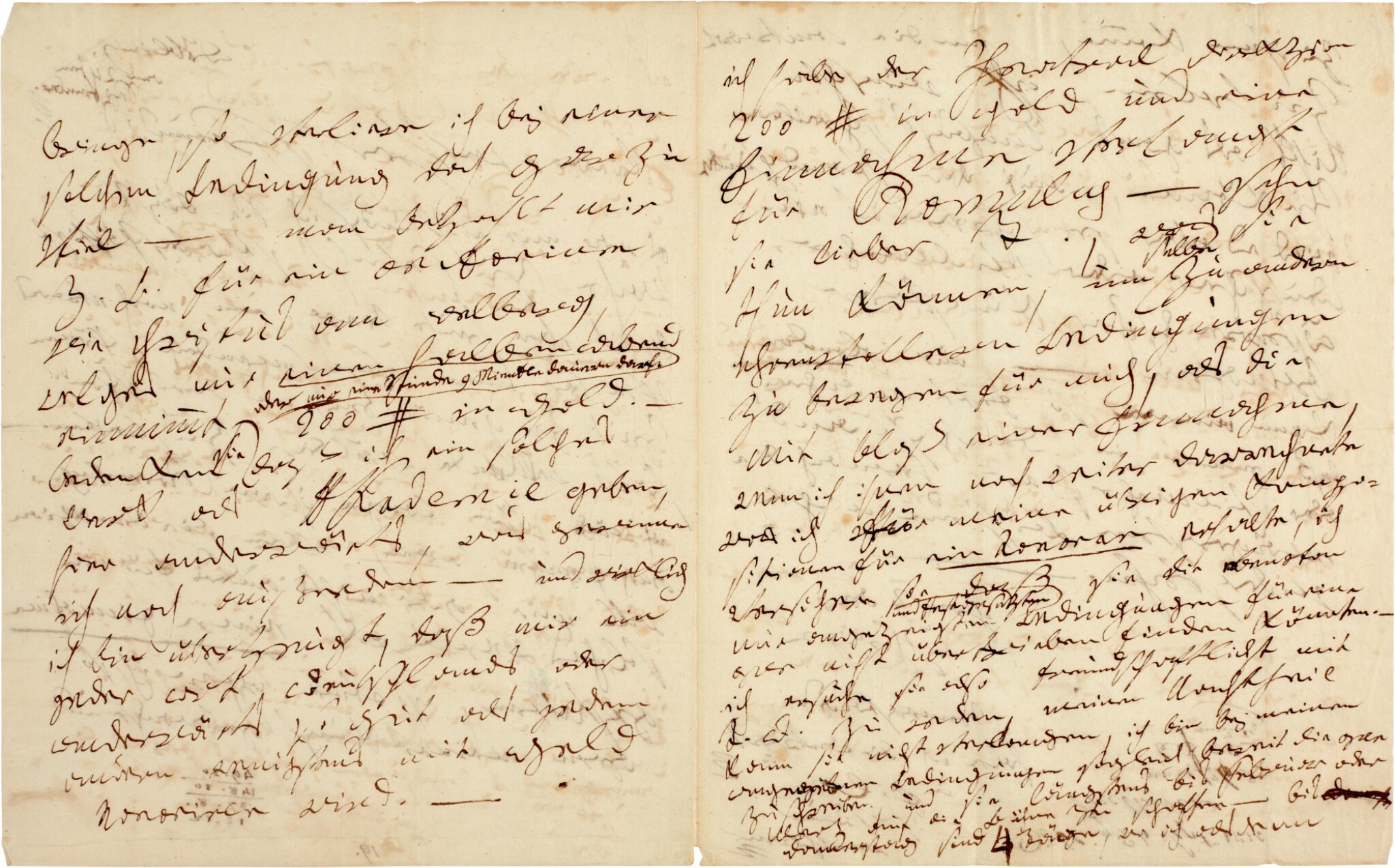 telling him that he has been extremely busy and has repaired to Döbling in order to enjoy the beauty of the countryside in the fleeting last days of summer, rambling through the woods which have already lost half their leaves; Beethoven confesses to Treitschke that he would have begun their projected opera "Romulus und Remus" long ago, but that the directors of the Opera House are refusing to pay him properly, granting him just the takings for a single night, and that (although he has willingly offered to make all sorts of sacrifices for his Art) this is one loss too far and he has instead asked for two hundred gold ducats from the directors, the same as for his oratorio Christus am Ölberge, which only takes up half an evening (unlike a complete opera); he urges Treitschke to persuade his colleagues, the directors, to pay him what he has demanded, pointing out that he receives this much for his other compositions, warning him that after four days he will call on him in person to find out whether he has received a positive reply, in which case he is willing to start composing the opera right away, so that it can be staged in February or March at the latest; he concludes that he would only be too willing to compose without demanding a fee, but only in London could he become fat enough to return to Vienna and compose just for sake of his Art!

This is the finest letter by Beethoven to appear at auction in recent years and, at four pages quarto, the grandest for over a decade. We know of no other Beethoven letter to Treitschke, the librettist of Fidelio (1814), to come to auction, save for one in the Salzer sale at Sotheby's on 17 May 1990, lot 3.

Beethoven's description of walking among the trees in late summer reflects his well-known love of the countryside, where he sought the inspiration that was realized in such works as the "Pastoral" Symphony ("...bin ich eben heute hier, um noch etwas von der immer noch abnehmenden schönen Zeit zu genießen und durch schon halbwelkende Wälder zu streichen..."). This is also attested in the well-known drawings of the composer walking by Daniel Böhm and J.P. Lyser.

The composer's fierce independence and his fight to be properly rewarded for his art is also clearly described in this letter. Ferdinand Treitschke (1776-1842) had revised the libretto of Fidelio in 1814 and written a wholly new one for the composer, Romulus und Remus. There are no known sketches for their planned Romulus opera, but this letter shows that it was only the intransigence of the directors of the Hoftheater in Vienna that caused Beethoven to lose interest in it.  Treitschke's annotations record that, although he replied, Beethoven did indeed pursue the matter in person. Beethoven had problems with successive directors at the Hoftheater, Prince Lobkowitz and Count Palffy, even though both were patrons of the composer and Treitschke was the court poet.