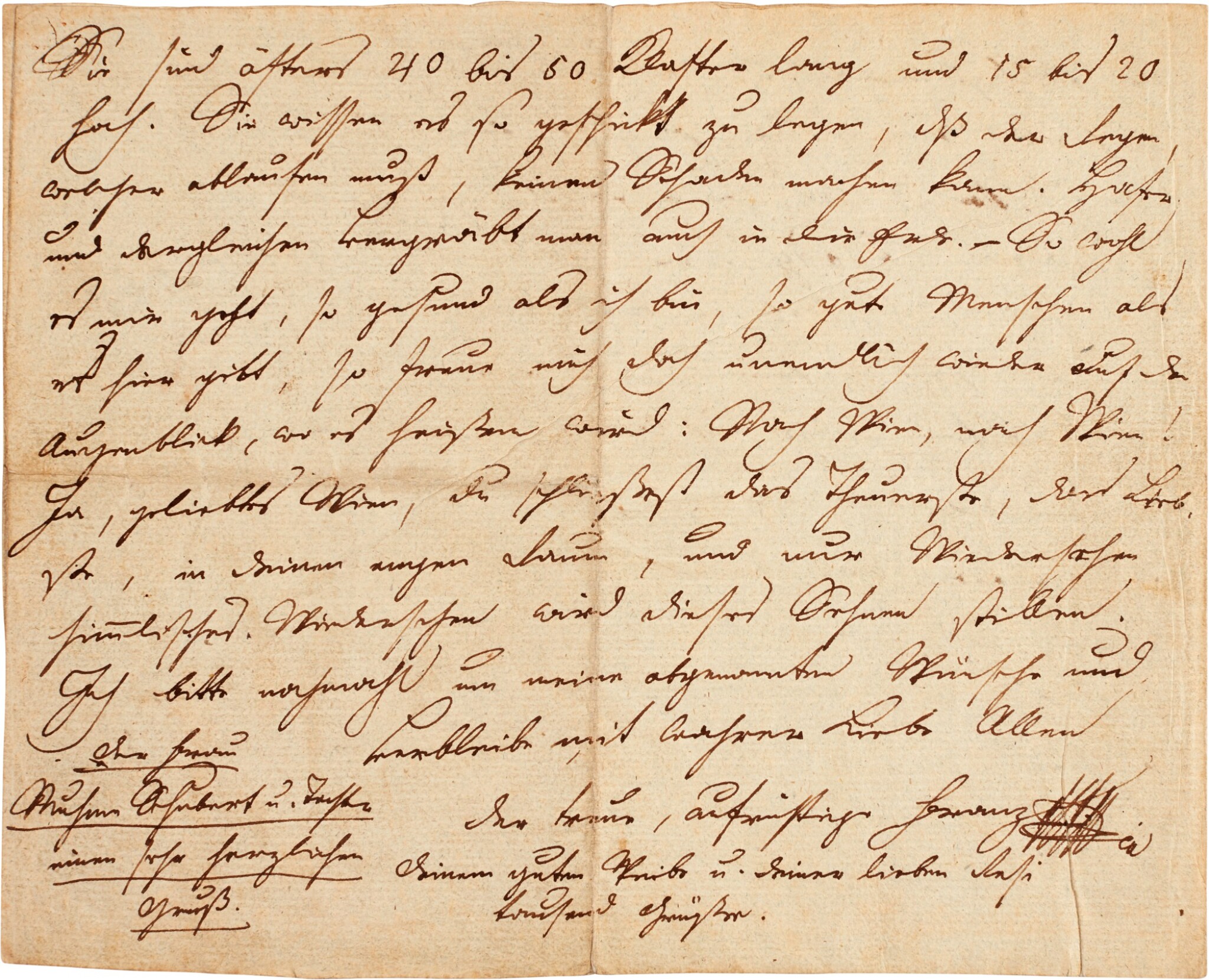 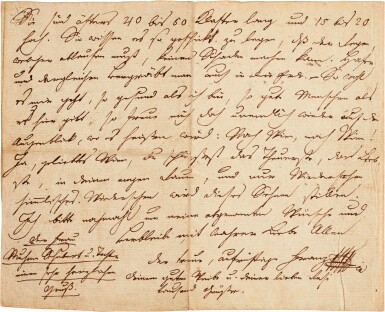 expressing his deep feelings for his family and for his hometown Vienna, telling Ferdinand that he has completed "his" Deutsches Requiem, D.621, which has made him sad as he "sang it from the bottom of his soul", suggesting that Ferdinand writes in the words and marks any repeats as he sees fit, wishing that he could bring his brother a little happiness, as he seems to be in a bad place at the moment; Schubert jokes that his stupid foot is falling asleep (which it wouldn't do if it could write), and he is going to sleep with it--and then reports picking up the letter again at 8 o'clock the following morning; Schubert asks Ferdinand in return for composing the "Trauermesse" for him, to extend his love to his parents, brothers and sisters, expecially his youngest brother Karl, send him some more clothes, especially two pairs of cashmere trousers (he can pay him as he has just earned 200 florins that month), since it is already getting cold and he will not leave for Vienna until the middle of November, giving a fulsome expression of his love for his Vienna, and that whilst, he is looking forward to seeing the harvest and the vintage at Freistadtl (belonging to Count Erdödy, his patron's uncle), nevertheless, most of all, he cannot wait to get back to his home town, which encompasses all that he holds dear ("...So freue mich doch unendlich wieder auf den Augenblick, wo es heißen wird: Wien, nach Wien! Ja, geliebtes Wien, Du schließt das Theuerste, das Liebste, in Deinen engen Raum, und nur Wiedersehen himmlisches Wiedersehen wird diese Sehnen stillen...")

RARE: This "delightful and entrancing letter" is exceptional for its length and personal expression; there has not been one comparable at auction since the Salzer sale in 1990. Schubert's autograph letters are by far the rarest of the great composers of the Viennese Classical Era. Whilst there are roughly four hundred letters and diaries by Haydn, six hundred letters by Mozart and sixteen hundred by Beethoven, only about sixty by Schubert are known to survive, mostly in museums. We have not seen an autograph letter by Schubert at auction here for fifteen years and none anywhere for nearly a decade (a note five-lines long was sold in Berlin in 2011).

Schubert composed the Deutsches Requiem ("Trauermesse") for his brother Ferdinand, who then passed it off as his own composition in order to further his career and to pass exams He had the work performed at an orphanage in Vienna under his name (the "Wiener Waisenhaus") in September 1818 and it was even published by Diabelli as Ferdinand's "opus 2" in 1826. However, this letter makes it clear that his famous brother Franz was in fact the composer, although the autograph is lost. In a subsequent letter to Ferdinand, Schubert begs him not to apologise for appropriating his work ("...so my German Requiem pleased you, and you cried over it, perhaps at the very word which I wept myself...[translation]").

In July 1818, Schubert travelled one hundred miles east to the Hungarian town of Zseliz (now Želiezovce in Slovakia), at the invitation of Count Johann Karl Esterházy of Galánta, to teach his teenage daughters Maria and Caroline. The "Owl House" where he stayed is still standing. Among the other works that Schubert composed during his sojourn in Zseliz are the famous "March Militaire" in D for piano duet op.51 (D.733 no.1), the piano duet sonata in B-flat op.30 (D. 617) and the songs "Das Abendroth" (D.627), "Einsamkeit" (D.600) and "Blonde zu Marien" (D.626).