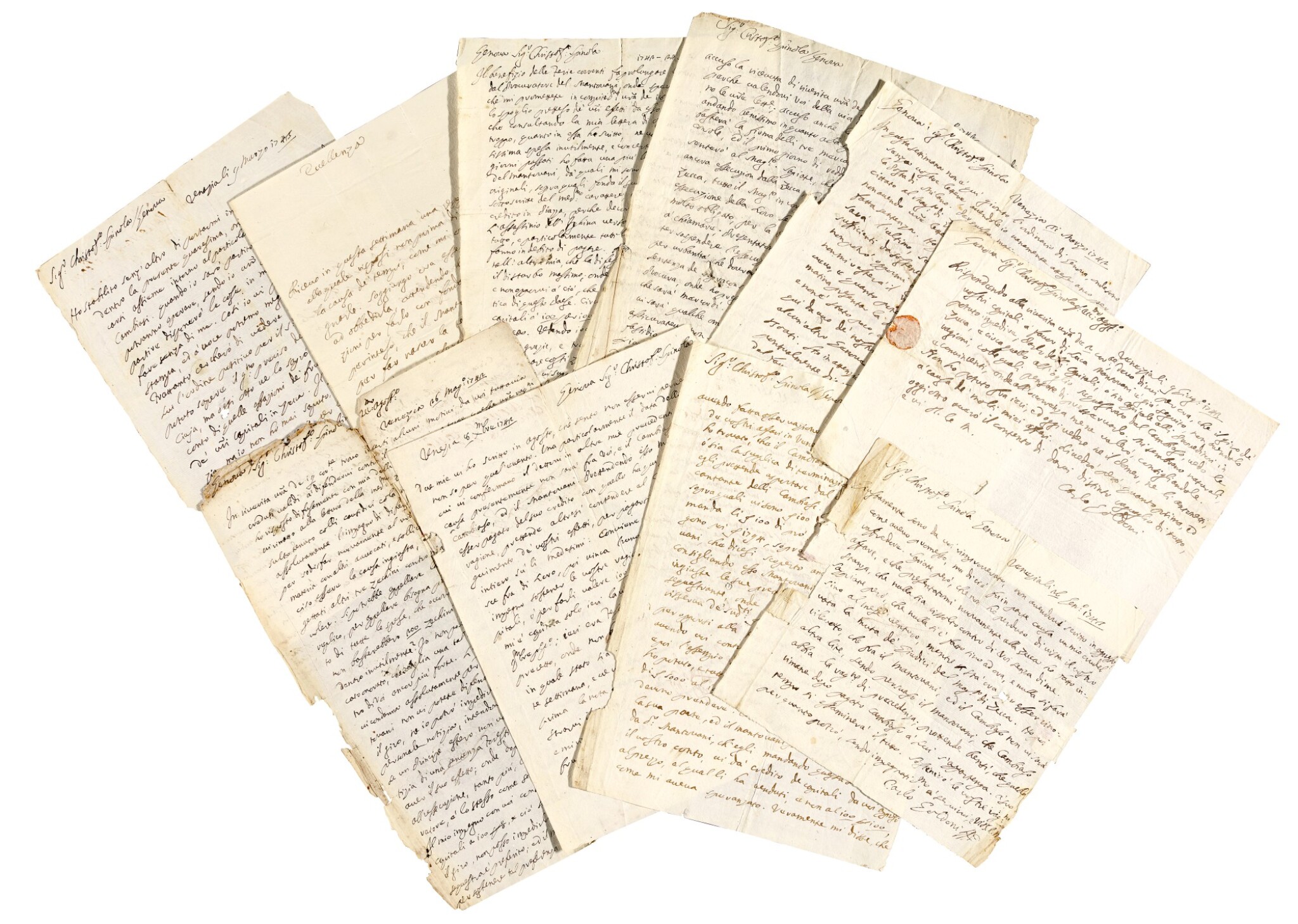 About the legal case in which he is defending Spinola against his creditors, explaining that he feels honoured to represent him and has attended various hearings on the case, protecting his interests as far as he can, delaying any adverse rulings by whatever means possible, but confessing candidly that, having been shown the all-too-convincing bills of exchange held by Spinola’s major creditor Luca Mantovani, he considers the case hopeless and that Spinola will have no alternative but to honour these bills, apparently signed by him, subsequently reporting several occasions on which he has played for time, putting off hearings and meetings and attempting to delay the inexorable transfer of Spinola’s funds to Mantovani over a period of some sixteen months; Goldoni later informs him of his impending return from Venice to Genoa, assuring him that he will leave everything in order and reporting the sequestration of Spinola’s funds at the Zecca, despite his client’s understandable wish to continue fighting for their preservation, explaining that he has been unable to meet with Pomer or Antonelli because he is beset with affairs and problems of his own

14 pages, folio, 4to and oblong 4to (up to c.31.5 x 22.5cm), up to 33 lines per page, autograph address-panels, some annotated and dated by the recipient, remains of red seals, Venice, 17 February 1742 to 9 June 1743, 2 small holes through most pages, a few with other perforations, seal-tears, creasing and paper-loss to margins slightly affecting the text on 3 letters,

RARE: Autograph letters by Carlo Goldoni (1707-1793) are virtually unobtainable on the market, and this is the only series by him ever to appear at auction. There were two letters offered in the Schram sale in 2007, one sold at Sotheby’s in 1978 and one in New York in 1926. Otherwise only signed bills of exchange (or promissory notes) have appeared at auction, and as is revealed in this correspondence, the integrity of such "cambiali" could be compromised.

Carlo Goldoni is one of the classic figures of Italian literature, the Father of Italian Comedy and the author of some of its best-loved and most enduring tales. Among his great comedies are Il servitore di due padroni (1746), I rusteghi (1760), La vedova scaltra (1748) and Il ventaglio (1765). Goldoni also wrote several famous opera librettos, his most famous collaborations being with Baldassare Galuppi and Niccolò Piccinni, whom he furnished with Il filosofo di campagna (1752) and La buona figliuola (1760) respectively. His Il mondo della luna was set by Galuppi (1750) and Haydn (1777) and his La finta semplice provided the basis for Mozart’s opera (1768). Goldoni’s classic dramas have been updated regularly in modern times: his Il ventaglio, I rusteghi, and half a dozen others were adapted by Ermanno Wolf-Ferrari (1876-1948) and his play Il servitore di due padroni was the basis of Richard Bean’s One Man, Two Guvnors (2011).

Before his career as a dramatist Goldoni trained as a lawyer and his father-in-law obtained for him the role of Genoese consul in Venice. However the young Goldoni was shocked to discover that the post was totally unpaid, and he had to undertake legal work to make ends meet. The case in which Goldoni defended Cristoforo Spinola centred on the Genoese merchant’s business dealings in Venice, his funds at the Zecca and the dishonesty of his agent, one Benedetto Ighina, who had abused Spinola’s trust and prestige by falsifying his signature on a substantial number of bills of exchange and decamping with the proceeds of the crime. The creditors, foremost among them Luca Mantovani, sought to expropriate Spinola’s funds at the Zecca in order to make good the debt created in his name. Despite Goldoni’s efforts, which he quickly assessed to be hopeless, Spinola was driven into bankruptcy, condemned to the debtor’s prison in Genoa. Goldoni was soon forced to leave Venice for a similar reason; he had been duped by a sea-captain from Ragusa (now Dubrovnik) and, like Casanova and Lorenzo da Ponte after him, was forced to flee the city leaving substantial unpaid debts, unfortunately not for the only time in his long career.

Walter Toscanini listed the ten letters being offered today in his collection in July 1936 : 17 February 1742, 24 March, 31 March. 12 May, 26 May, 8 December and 15 December; those from 1743 are dated 26 January, 9 March and 9 June (the first letter is misdated by Ortolani to 1743). Ortolani's complete edition contains twelve letters and Giardini’s eleven. One letter of 30 June 1742, recorded by both Ortolani and Giardini, is missing. Our final letter (9 June 1743) is absent from Ortolani’s edition, but one letter of 23 February 1743, present there, is missing here. Otherwise unrecorded and presumed lost are a letter from March 1742 and two others from August, which can be inferred from the extant letters contained here.

Giuseppe Ortolani’s complete edition of 1956 contains some 300 letters by Goldoni, including over a hundred diplomatic reports back to Genoa, although it is not clear how many of these survive in autograph. Gilberto Pizzamiglio observes that Goldoni’s extant letters are fewer in number than those of many Italian writers of his era (“dovuto al fatto che siamo di fronte, più che a un letterato, a un uomo di teatro?”). For Goldoni's letters to Spinola, Ortolani could not have used these originals, but was dependant on transcripts which were given to the Museo Civico di Venezia (now the Museo Correr) by Achille Neri in 1920 (cf Ortolani, p.739; he suggests, wrongly, that Neri gifted the originals).

Acquired by the present owner directly from Walter Toscanini (1898-1971), the collector and dealer in manuscripts and son of the great conductor. Before he emigrated to the United States in 1938, Walter sought unsuccessfully to sell these ten letters to Venice (the Casa di Goldoni and the Museo Correr), as correspondence with Ortolani and Giardini in 1936 makes clear. Albano Sorbelli's 1939 inventory of the manuscripts at the Correr therefore does not include any Goldoni letters.

2 small holes through most pages, a few with other perforations, seal-tears, creasing and paper-loss to margins slightly affecting the text on 3 letters,

Acquired by the present owner directly from Walter Toscanini (1898-1971), the collector and dealer in manuscripts and son of the great conductor. Before he emigrated to the United States in 1938, Walter sought unsuccessfully to sell these ten letters to Venice (the Casa di Goldoni and the Museo Correr), as correspondence with Ortolani and Giardini in 1936 makes clear. Albano Sorbelli's 1939 inventory of the manuscripts at the Correr therefore does not include any Goldoni letters.
C. Giardini, 'Carlo Goldoni avvocato, con undici lettere inedite', in Ateneo veneto (anno cxxxiv), volume 130 (1943), pp.1-10; G. Ortolani, 'Lettere' in Tutte le opere di Carlo Goldoni, volume 14 (1956, second edition, 1969) , pp.157-167; G. Pizzamiglio, 'Carlo Goldoni: lettere da Parigi a Venezia', in Lettere italiane volume 45 (1993), pp.519-537.