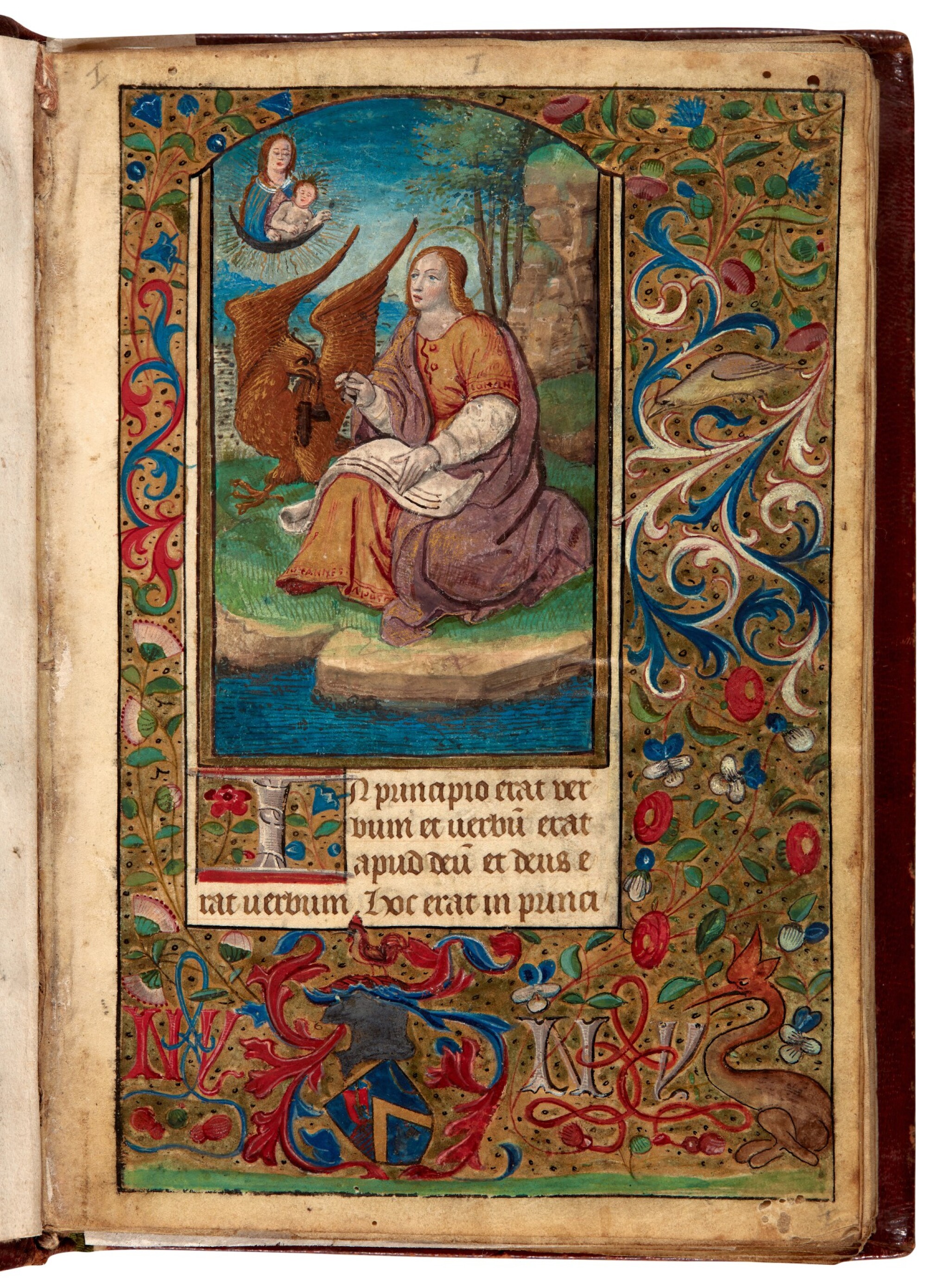 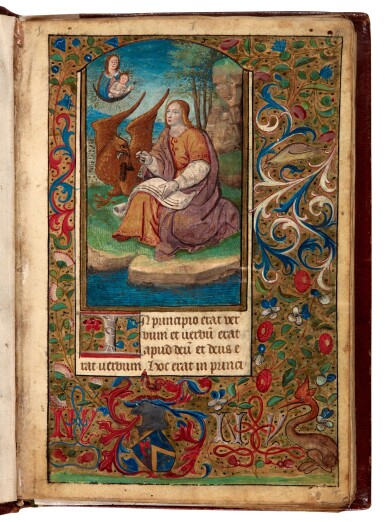 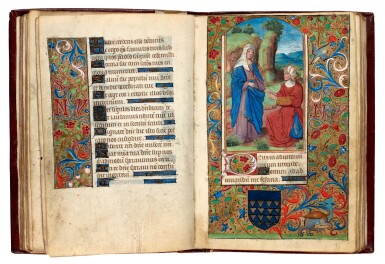 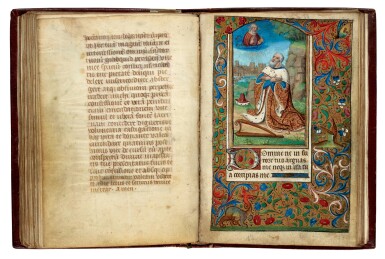 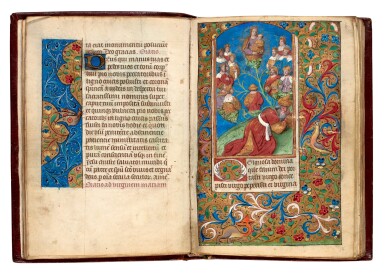 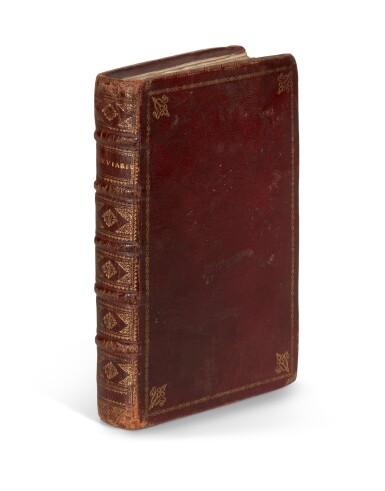 vellum, c.180×120mm, iii + 116 + iii leaves, sporadic pencil foliation in the lower right corners, lacking a calendar and one leaf with the start of the Hours of the Cross, probably with a miniature, else complete, collation: 1–78, 88-1 (last leaf missing; ff.57–63), 98, 102 (ff.72–73), 11–158, 164-1 (last leaf, blank, cancelled), written in gothic bookhand with 20 lines per page, the ruled space c.110×60mm, illuminated with three- and four-line foliate initials; one-, two-, and three-line initials in gold on a blue ground every page with at least a one-sided panel border of foliage, fruit, flowers, birds, etc. on a gold ground, or similar motifs on a ground divided into geometrical compartments with panels of stylised acanthus on grounds of solid colour, often with the initials NY joined by a love-knot, four small miniatures accompanied by three-sided borders, and fourteen large miniatures above three-line initials and four lines of text surrounded by full borders; sewn on five bands and bound in deep red 18th-century French morocco over pasteboards, the covers gilt with simple frame and corner ornaments, the spine densely gilt and with title ‘Breviariu[m]’ in capitals, marbled endpapers, gilt edges; somewhat scuffed, but unrestored, appealing, and sound

(1) Doubtless written and illuminated at Reims, for a couple with the initials ‘N’ and ‘Y’ or ‘I’ (‘N’ and ‘I’ are on ff. 49v, 55v, on a lozenge and a shield respectively; perhaps Nicolas and Y/Isabeau?), which appear joined by a love-knot in many of the borders, and each of whose arms appear in five. One is azure, a chevron or between three eagles argent, beaked and clawed gules, two and one, in chief a crescent or (ff.1, 67), the first occurrence with helm, mantling, and a bird (woodpecker?) crest. This latter is close to the arms of the Brucheville and the Le Jolis de Villiers families, both of Normandy, and the Levasseur family of Le Mans. The other arms are azure, the lower part with four rows of downward-pointing argent triangles (ff.6, 35, 52v, and probably 49v, but overpainted): these do not appear to be normal armorial charges, and are perhaps the artist’s awkward attempt to depict vair (usually represented by interlocking argent and azure shapes similar to triangles).

(2) Rebound in the 18th century, at which time the calendar was probably discarded; early flyleaf annotations include the number ‘373’.

The style of illumination of both miniatures and borders is somewhat generic, and similar to manuscripts found from Paris and the Loire valley – suggesting that the general style was popular and widely emulated – but the peculiarities of the iconography suggest that it emanates from a rather individual local artist. The presence of the Tree of Jesse miniature is especially unusual, and suggests influence from early printed editions, in which the iconography was more common. The details of the compositions of the Annunciation to the Shepherds and the Presentation in the Temple are also very unusual. (The text is similarly idiosyncratic: between the groups of saints in the Litany for example, are the phrases ‘Sancte chorus apostolorum’, ‘Sancte chorus martyrum’, etc., instead of the standard ‘Omnes sancti apostoli’ etc.)

The subjects of the large miniatures are:

f.1 St John on Patmos, with his eagle, seeing a vision of the Virgin and child on a crescent moon; the hem of his tunic lettered in capitals ‘Iohannes apost.’

f.6 The Agony in the Garden, with the sleeping apostles in the foreground and a crowd of soldiers in the background

f.27v The Annunciation, the Virgin seated before a tent-like structure with an open book on her lap

f.35 The Visitation, with Elizabeth kneeling before the Virgin, in a landscape

f.42v The Nativity, the Virgin and Joseph adoring the Child

f.46v The Annunciation to the Shepherds, set in an unusual landscape with a stream and a flock of sheep in the foreground

f.49v The Adoration of the Magi

f.52v The Presentation in the Temple, Simeon with mitre and halo, kneeling; no altar

f.55v The Flight into Egypt; the Child on the donkey, the Virgin and Joseph walking

f.60v The Coronation of the Virgin, with rows of gold seraphim in the foreground and background

f.67v Pentecost, the Dove above the head of the Virgin, who sits on a gold throne surrounded by the apostles, Sts Peter and John the Evangelist kneeling in the foreground

f.74 King David in Penitence, his harp and crown on the ground beside him, god above

f.93 A naked man in a fiery hell, tormented by demons, looking up at a soul held on god’s lap in heaven

f.2v St Luke wearing a turban, writing at a sloped desk, with the bull

f.3v St Matthew writing on a scroll on his knees, his exemplar held by the angel; the edges of the backcloth and his mantle lettered in capitals ‘Sequen. evangeli. scdm. sancte Mathe.’

f.5 St Mark writing in a book, wearing a turban, with the lion

f.14v The Virgin and Child, half-length