PROPERTY FROM A JAPANESE COLLECTION 日本收藏 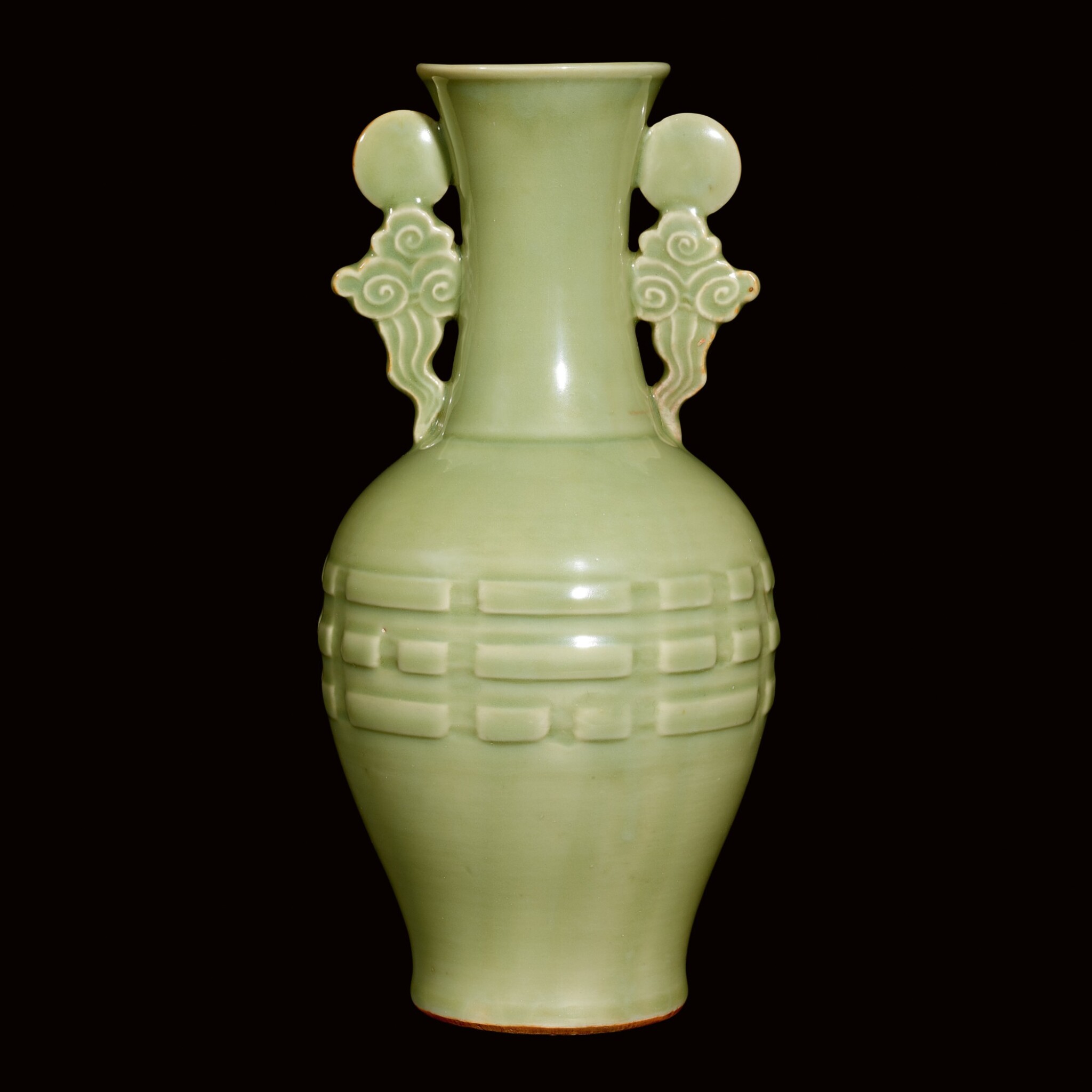 PROPERTY FROM A JAPANESE COLLECTION 日本收藏

Property from a Japanese Collection

of elegant baluster form rising from a tapered foot to a tall waisted neck, moulded around the body with the bagua (Eight Trigrams), the neck flanked by a pair of handles in the form of a sun issuing from a wisp of ruyi clouds, covered overall save for the footring in an unctuous sea-green glaze, Japanese wood box

The vase is in good condition with just minor original firing imperfections including a 0.2cm glaze gap at the rim and two body lines in the glaze, at the lower section of the neck.

From the Yuan dynasty, Longquan potters aimed at adding interest to their monochrome products through complicated methods of forming and decorating. Other Longquan celadon vases of the period with complex handles are known, but the form of the current vase, where the handles are composed of a flattened sun issuing from wispy ruyi clouds, is extremely rare. The only other example appears to be in the Hakutsuru Fine Art Museum, illustrated in Hakutsuru Bijutsukan kanzohin senshu [Collection of the Hakutsuru Fine Art Museum], Kobe, 2018, cat. no. 61. The sun-and-cloud motif also appears on qingbai funerary vases, such as on a pair dated 1293, discovered in Guixi county, illustrated in Dated Qingbai Wares of the Song and Yuan Dynasties, Hong Kong, 1998, pl. 94. The motif is also found as a handle on Yuan dynasty gold cups, as seen on an example in the Meiyintang collection, illustrated by Regina Krahl, Chinese Ceramics from the Meiyintang Collection, London, 1994-2006, vol. 3, no. 23.

The crisp decoration of the bagua motif around the lower body is a more commonly found design motif on Longquan celadon. A tripod incense burner of archaistic lian form, moulded with a band of bagua motifs, assigned to the Yuan dynasty, is illustrated in Zhu Boqian, ed., Celadons from Longquan Kilns, Taipei, 1998, pl. 182. See also an incense burner with bagua motifs sold in our New York rooms, 18th March 2017, lot 1385, from the collection of Brooks and Dorothy Cofield.