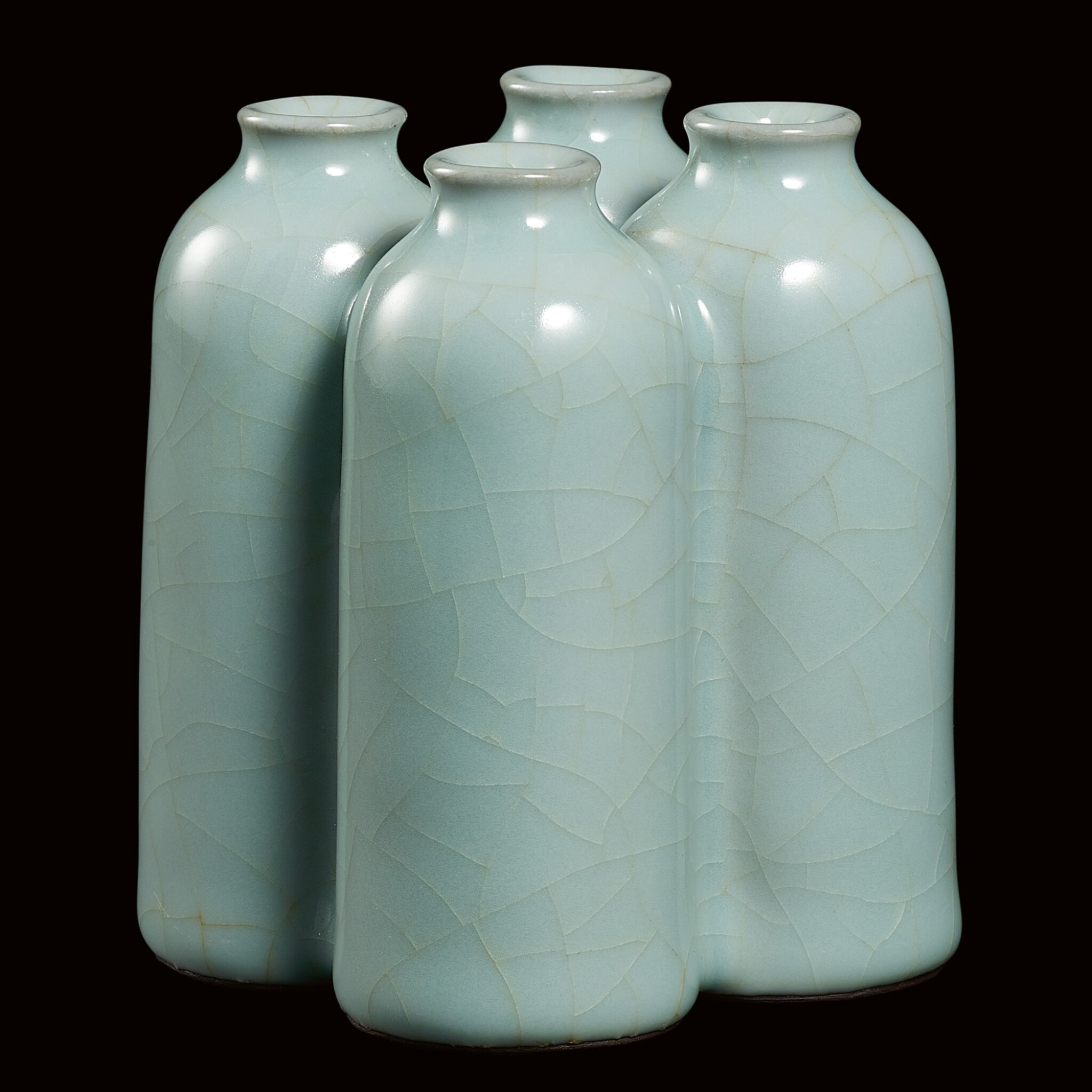 SEAL MARK AND PERIOD OF YONGZHENG

masterfully potted as four conjoined vases of slender cylindrical form with a short neck and everted rim, covered overall in an unctuous pale bluish-grey glaze suffused with a matrix of yellowish-brown crackles, the footring applied with dark brown dressing, each base with one character of the four-character seal mark in underglaze blue

The vase is in good overall condition, apart from a natural firing flaw of approx 1.5 cm at the joint of two vases.

Chinese Art from the Collection of James W. and Marilyn Alsdorf, The Arts Club of Chicago, Chicago, 1970, cat. no. c59l.

An Exhibition of Important Chinese Ceramics from the Robert Chang Collection, Christie's London, 1993, cat. no. 59.

﻿ 《Chinese Art from the Collection of James W. and Marilyn Alsdorf》， 芝加哥藝術俱樂部，芝加哥，1970年，編號c59l

Inspired by Song dynasty prototypes, conjoined vases of this charming and unusual form were an innovation of the Yongzheng reign, and required craftsmen’s utmost attention in potting and firing. A slightly smaller vase of this type in the Palace Museum, Beijing, is illustrated in Qingdai yuyao ciqi [Qing imperial porcelains], vol. 1, Beijing, 2005, pl. 149; two were sold in these rooms, the first, 24th May 1985, lot 503, the second, 22nd May 1984, lot 185, and again, 8th April 2011, lot 3002; and one from the collection of Stephen Junkunc III, sold in our New York rooms, 20th March 2019, lot 518.

Vases of this form with Yongzheng marks and of the period, are also known covered in other monochrome glazes: see an example with a Ru-type glaze, in the National Palace Museum, Taipei, included in the museum’s exhibition Qing Monochrome Porcelain, Taipei, 1981, cat. no. 77; a celadon-glazed example from the J.M. Hu Collection, sold in our New York rooms, 4th June 1985, lot 40; and a slightly smaller version covered in a teadust glaze, also sold in our New York rooms, 21st March 2018, lot 536.