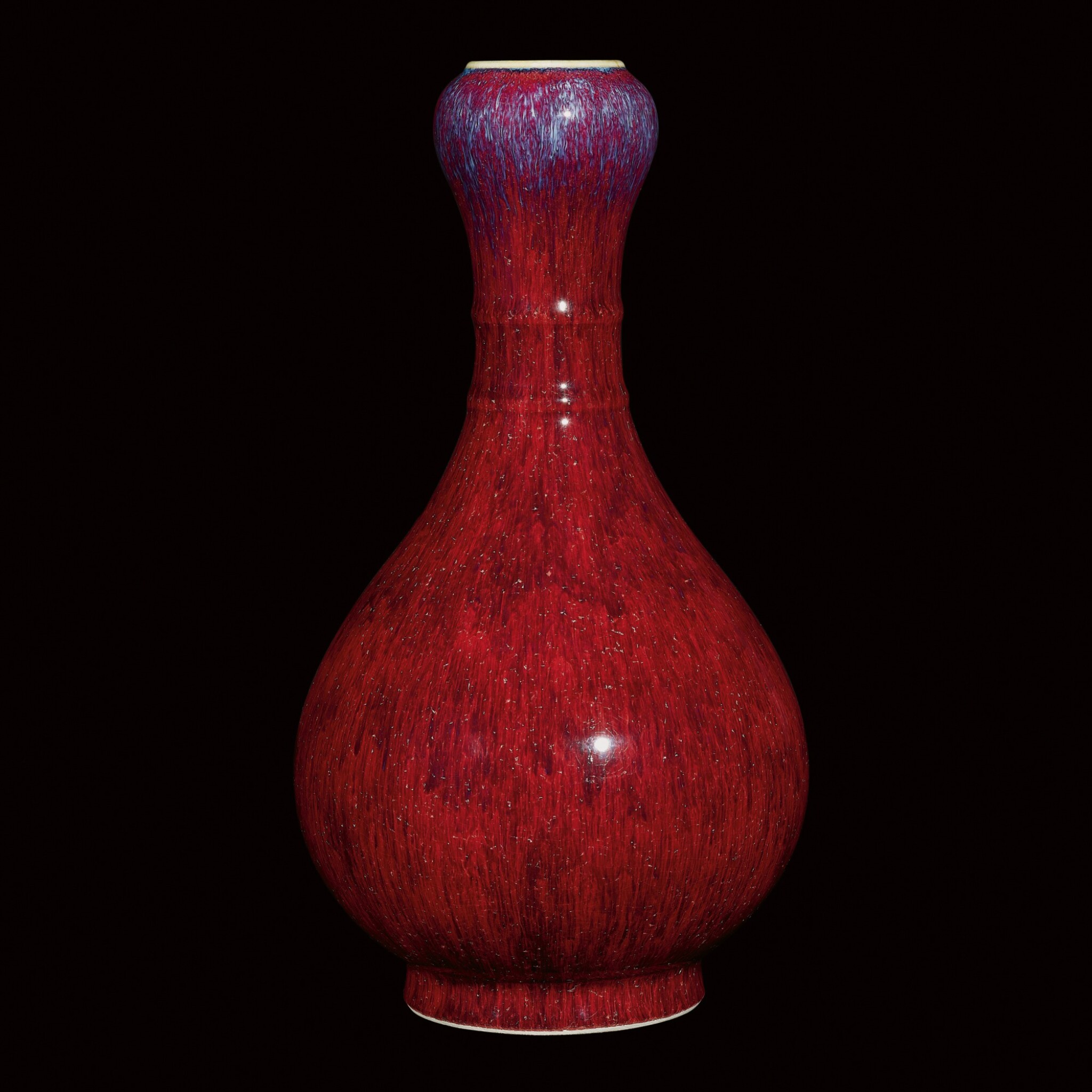 SEAL MARK AND PERIOD OF QIANLONG

the pear-shaped body rising from a splayed foot to a slender neck surmounted by a garlic-head mouth and thin lip, covered overall save for the footring with a rich and lustrous raspberry-red glaze with milky-lavender streaks drizzling down from the cream-coloured rim, the base with a mottled mushroom-brown wash

The vase is in good overall condition. There is expected minor pitting to the thick crackled glaze and minor flakes along the foot.

Elegantly shaped with smoothly sloping shoulders and elongated neck, suantouping or ‘garlic-mouth’ vases are among the most interesting vessel shapes of Chinese porcelain. The form, featuring a distinctive bulbous mouth in the shape of a garlic fruit, was popular in the Ming and Qing dynasties. Generally, imperial porcelain vases during the Qing period were manufactured for decorative purposes or as flower vases. Suantouping, with their typical narrow mouth, would be suited to hold one flower or a single fruiting branch, which would match one of those depicted on the vase. The origin of the ‘garlic-mouth’ as a decorative element, is uncertain, but the vessel itself is modelled after an archaic bronze wine vessel named hu with a mouth distinctively formed of garlic cloves, see Jenny So, Eastern Zhou Ritual Bronzes from the Arthur M. Sackler Collections, New York, 1995, no. 52, where the hu is attributed to the late Eastern Zhou, late Warring States period, 4th-3rd century BC. The bronze hu equally features a slightly flaring ring foot, but a shorter, rounder body and a longer neck. In its shape, the suantouping of the Ming period tends to be closer to the bronze prototype than the Qing variant, which is much more elegantly shaped and better adapted to Qing court taste.

It is extremely rare to find a Qianlong garlic-mouth vase with a flambe glaze. The form is more commonly found with a Ru-type glaze, such as an example from the Qing Court collection and still in Beijing, illustrated in The Complete Collection of Treasures of the Palace Museum. Monochrome Porcelain, Hong Kong, 1999, pl. 215, and one sold in these rooms, 8th October 2008, lot 2512.