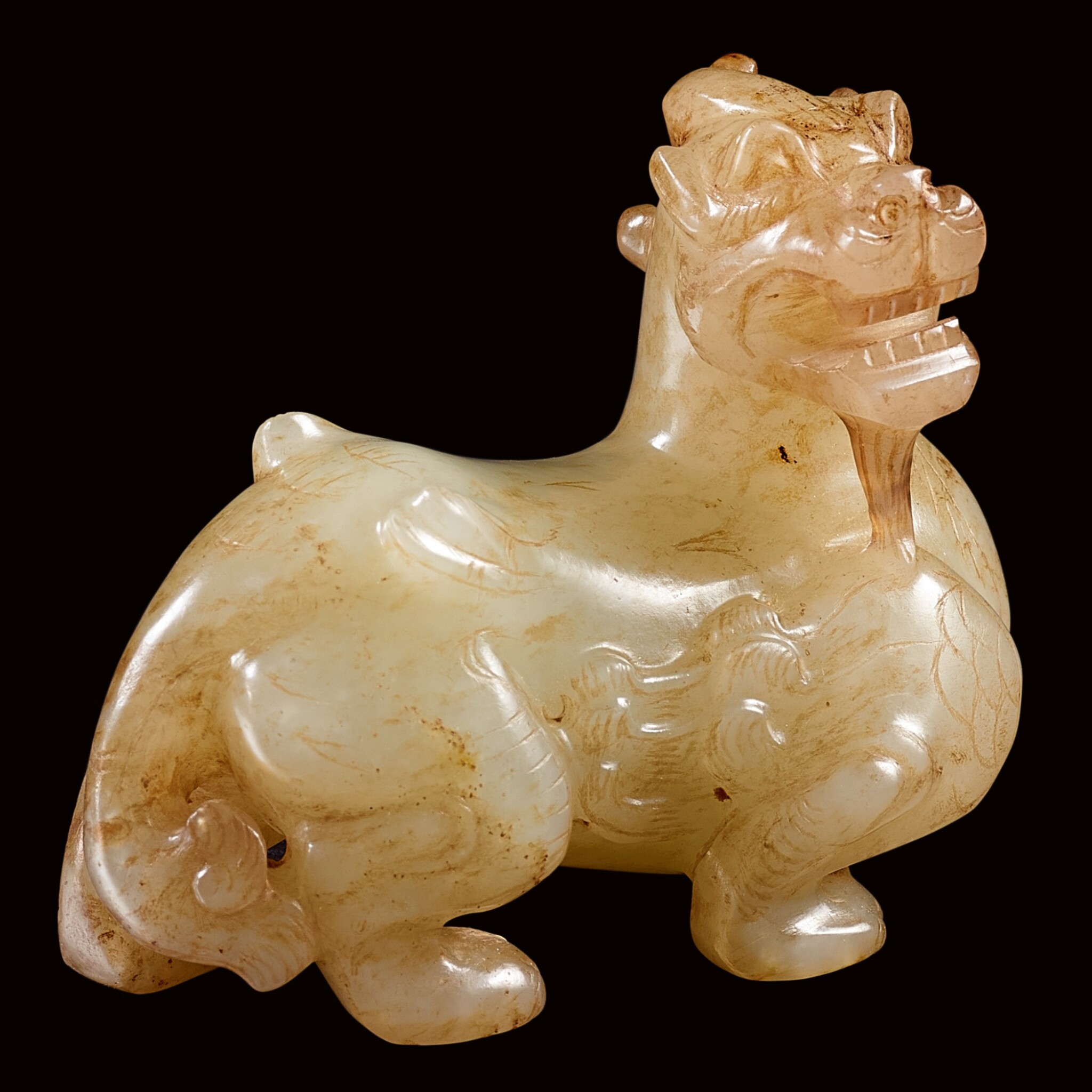 Property from the Hei-Chi Collection

A RARE CELADON JADE FIGURE OF A BIXIE

depicting prowling with the left front leg striding forward, the muscular body of the horned beast rendered with a large pair of wings extending from the front haunches and detailed with fine plumage, echoing the contours of the bifurcated tail, the celadon stone suffused with faint russet inclusions

The figure is in very good condition with just insignificant nibbles to the right nostril and left side of the mouth.

Fashioned in the round from a pebble of translucent celadon tone, this carving convincingly captures the innate power and otherworldliness of the bixie. The carver’s virtuosity with the medium is evident in the articulation of the animal’s powerful semi-reclined pose and the fine incised lines that details its scaly body and wings. Depicted with the head of a lion, a single horn and a pair of wings, this mythical beast has its origins in the arts of western Asia, and became a frequently depicted subject during the transition from the Western Han to the Eastern Han dynasty.

The Han dynasty saw the emergence of a rich sculptural tradition that developed from a heightened interest in the representation of animals and fabulous beasts in durable materials. The spread of Daoist philosophy and the pursuit of immortality among the upper echelons of Han society had a dramatic impact on the production and consumption of such sculptures. Monumental stone sculptures of animals and their small jade counterparts were found at Han dynasty burial sites, and are believed to have served the function of protecting their owner and leading the way to paradise. Evidence of this tradition is scarce, although a group of five jade animals were recovered in the vicinity of Emperor Yuan’s (r. 48-33 BC) mausoleum in Xi’an, including a bixie modelled in a similar pose. It has been suggested that these animals may have been displayed within the tomb as inhabitants of a miniature paradise landscape, as similar depictions are known on contemporary bronze incense burners (boshanlu).

Only a small number of jade mythical beasts from this period is known; one in the Palace Museum, Beijing, is illustrated in Compendium of Collections in the Palace Museum. Jade, vol. 4, Han, Wei, Jin, Southern and Northern Dynasties, Beijing, 2011, pl. 236; and an Eastern Han example, from the Sze Yuan Tang collection, was sold at Bonhams Hong Kong, 5th April 2016, lot 32. See also a much larger bixie in the National Palace Museum, Taipei, included in the Museum’s exhibition Splendid Treasures. A Hundred Masterpieces of the National Palace Museum on Parade, Taipei, 2012, cat. no. 18; another from the collection of Desmond Gure, now in the Freer Gallery of Art and Arthur M. Sackler Gallery, Washington D.C., published on the Museum’s website, accession no. S1987.26; and a jade fitting in the form of a bixie, illustrated in Jessica Rawson, Chinese Jade from the Neolithic to the Qing, London, 1995, p. 353, fig. 6.