PROPERTY OF A LADY 女史珍藏 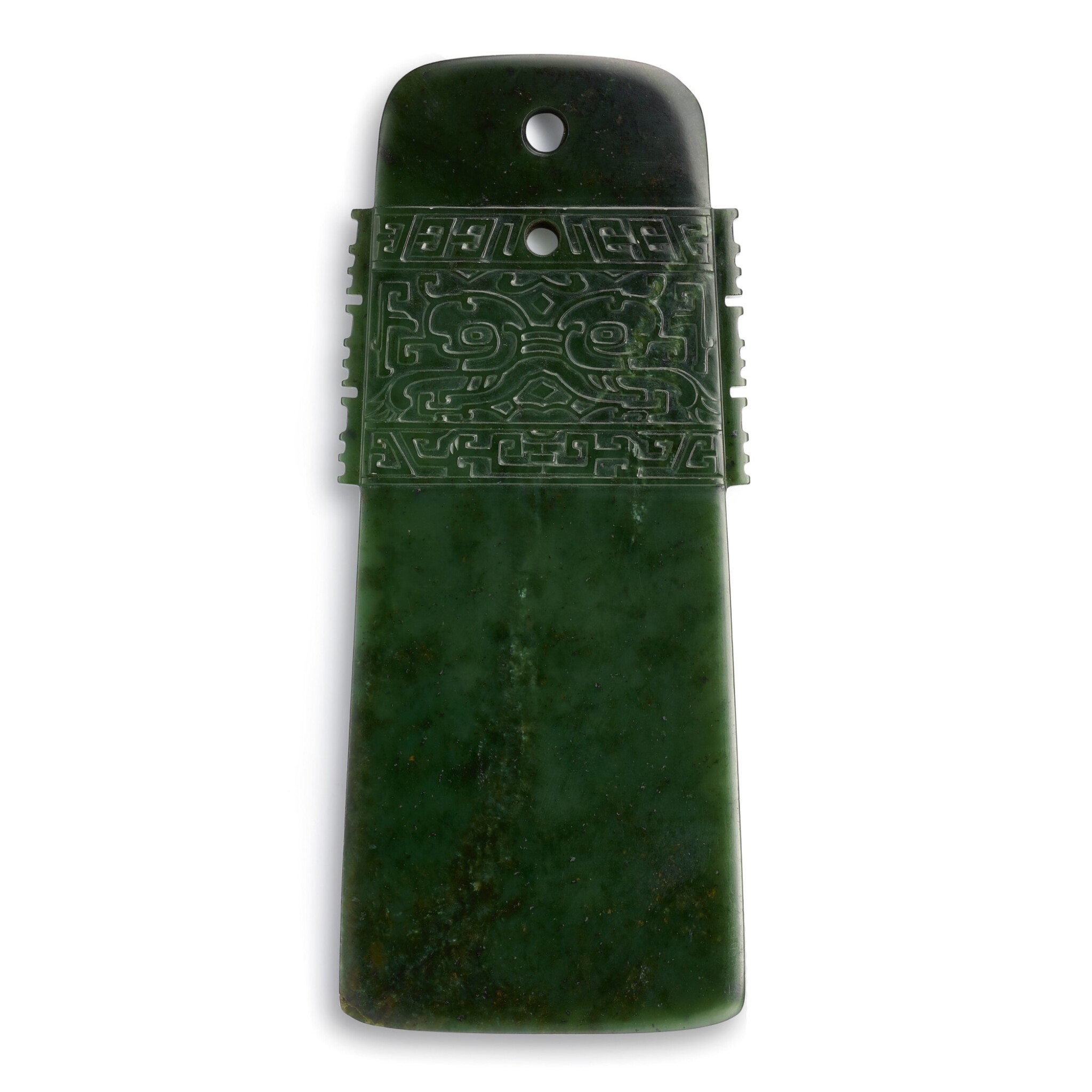 PROPERTY OF A LADY 女史珍藏

FANGGU MARK AND PERIOD OF QIANLONG

the trapezoidal form worked in low relief on each side with a band enclosing a taotie mask, flanked by a pair of projecting toothed flanges on the sides, above a six-character fanggu reign mark and an inscription reading Yue zi di shiliu hao (number 16 of yue) respectively

Among the many rulers in China’s extensive history, the Qianlong Emperor of the Qing dynasty is arguably one of the greatest in respect to his connoisseurship and appreciation of the nation’s art. During his long reign, he collected and studied masterpieces from antiquity, and instructed his craftsmen to draw inspiration from these objects. The present jade axe is an example of the type of objects produced under the patronage of the Qianlong reign. While it was inspired by archaic jade axes, it isn’t a mere copy of its prototype as its lively design proudly displays the technical advances made in lapidary art in the Qing dynasty.

This axe is particularly special as it bears a fanggu (‘exemplifying antiquity’) reign mark and is inscribed with the characters Yue zi di shiliu, identifying this piece as the 16th in a series of objects called yue. The inscription is an inventory number, and the name of the series was taken from the Qianzi wen (The thousand character essay), a well-known literacy text with precisely a thousand characters, each written only once, which are used to compose rhythmic four-character couplets in seven chapters. The character yue appears as the 10th character in the essay.

A jade axe inscribed with the inventory number Yang zi sanshier hao (number 32 of yang), in the Palace Museum, Beijing, is illustrated in Compendium of Collections in the Palace Museum. Jade, vol. 8, Qing Dynasty, Beijing, 2011, pl. 9; one from the Liang series, in the Fitzwilliam Museum, Cambridge, is illustrated in C.S. Lin, 'The Collection of Qing Dynasty Jades in the Fitzwilliam Museum', Arts of Asia, May-June 2010, pl. 14, together with one from the Zan series, p. 115; and a white jade axe from the He series, was sold at Christie’s New York, 24th March 2011, lot 1532.