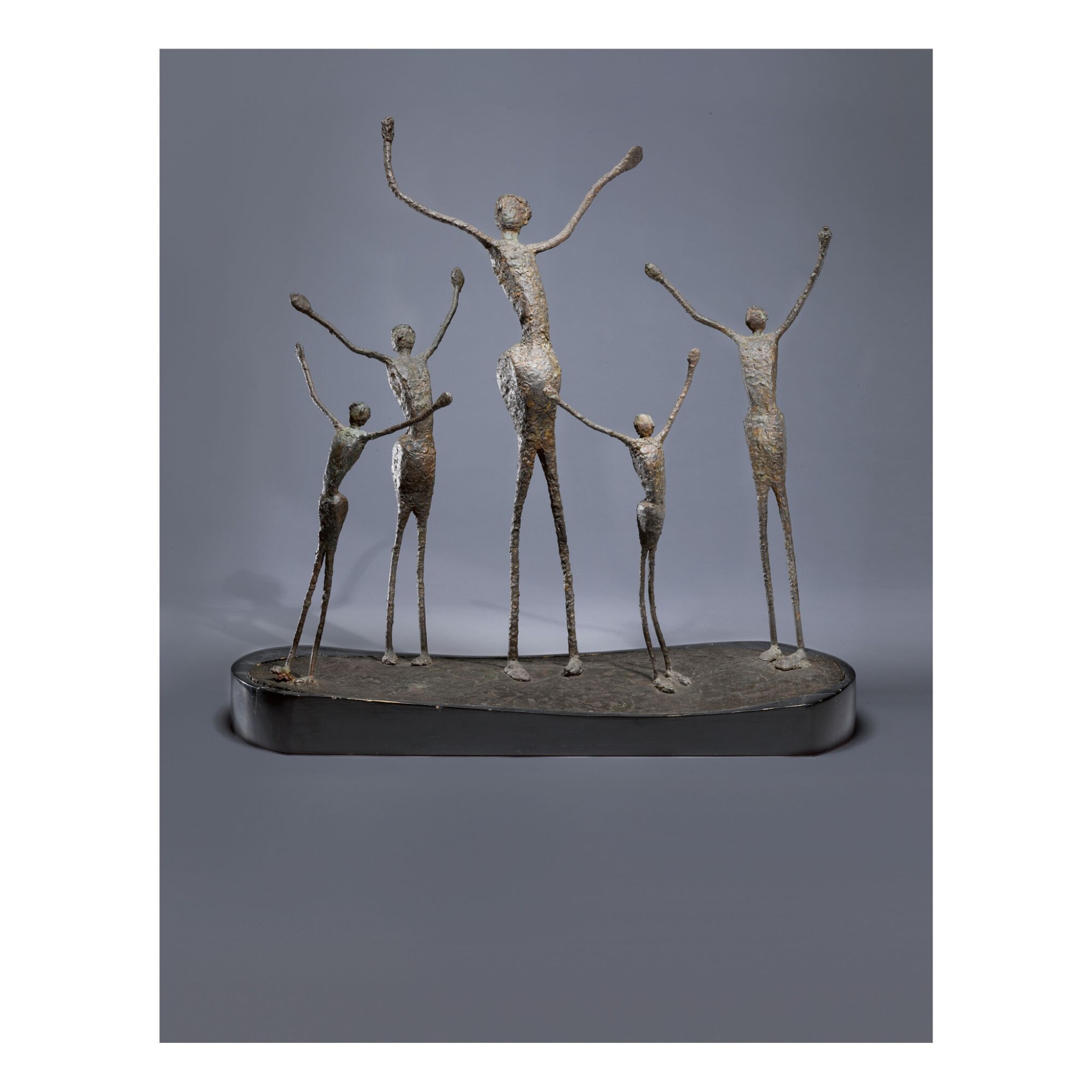 Bronze with custom detachable wooden base

This work is unique

Acquired from the artist on 1 May 1975 by Thomas and Sonja Bata, Toronto

Thomas J. Bata was a Czech entrepreneur who ran the Bata Shoe Company from the 1940s until the 1980s. From a humble cobbler’s shop started by his father, Tomas in the Moravian town of Zlin in the Czech Republic in 1894, the enterprise became the global conglomerate Bata Shoe Organization under Thomas J. Bata's leadership. He set foot on Indian soil for the first time in 1941 and became a household name in the country, the brand becoming almost a generic term for shoes. Thomas married Sonja Baťová, a Swiss Canadian woman in 1946 and they moved to Toronto. Sonja joined Thomas in the business and set her designing skills towards shoes. Blessed with a natural eye of art and design, Sonja was an avid collector and philanthropist. In 1979, she endowed the Bata Shoe Museum Foundation and established the Bata Shoe Museum, in 1995, which went on to become the world's largest shoe museum. Sonja was also the chair of the National Design Council (1970s), helped establish the Toronto French School, served as director of the Art Gallery of Ontario.

Amarnath Sehgal is among India’s foremost names in the field of modern sculpture. Witnessing the partition with its macabre killings had a profound effect on both his psyche and his art. His themes for much of his oeuvre centered around the importance of human dignity and freedom, and his response to the horrors of political violence as we see in the Uprising.

‘The super -realism of Uprising in beaten metal suddenly plunges us into the point-counter point of simplified human figures in tense spatial relationships of the group, fussed together by the passion of revolt. If Giacometti had destroyed the masses of Rodin’s Burghers of Calais and seen them in isolation of each other as in his City Square, Sehgal has filled up his emaciated forms with rounded hips and upstretched arms in the almost continuous narrative of Indian tradition. The transformation is a powerful image of movement of isolated figures, bounded by the tension of forward time into unlimited space.’ (Mulk Raj Anand, Amarnath Sehgal, Marg Publications, 1964, p. 14)

The current lot is endowed with a human and spiritual quality that evokes a timeless essence. This work belongs to an important series of powerful sculptures that he did in 1957 including Tyrannies of Colonialism and Cries Unheard, both 1958 and now in the collection of the National Gallery of Modern Art, New Delhi. The works are characterized by architectonic and elongated forms with flat rhythmic planes, and economic use of materials.

This grouping of sculptures is undoubtedly the crowning achievement of Sehgal’s career. They represent an added dimension when examining the individual subjects of each work, as indicated by their titles, that were clearly of intimate importance within the context of his own life. Uprising unites all the artist’s principal concerns throughout his life, becoming a universal survey of humanity, acknowledging both civilizations past and present and also humankind’s aspirations for the future. ‘His works serve as a bridge between the artist and ourselves. They possess an expressive power that move us into action, particular kind of behavior.’ (PN Mago, Contemporary Indian Art Series: Amarnath Sehgal, Lalit Kala Akademi, New Delhi, 1993, unpaginated)