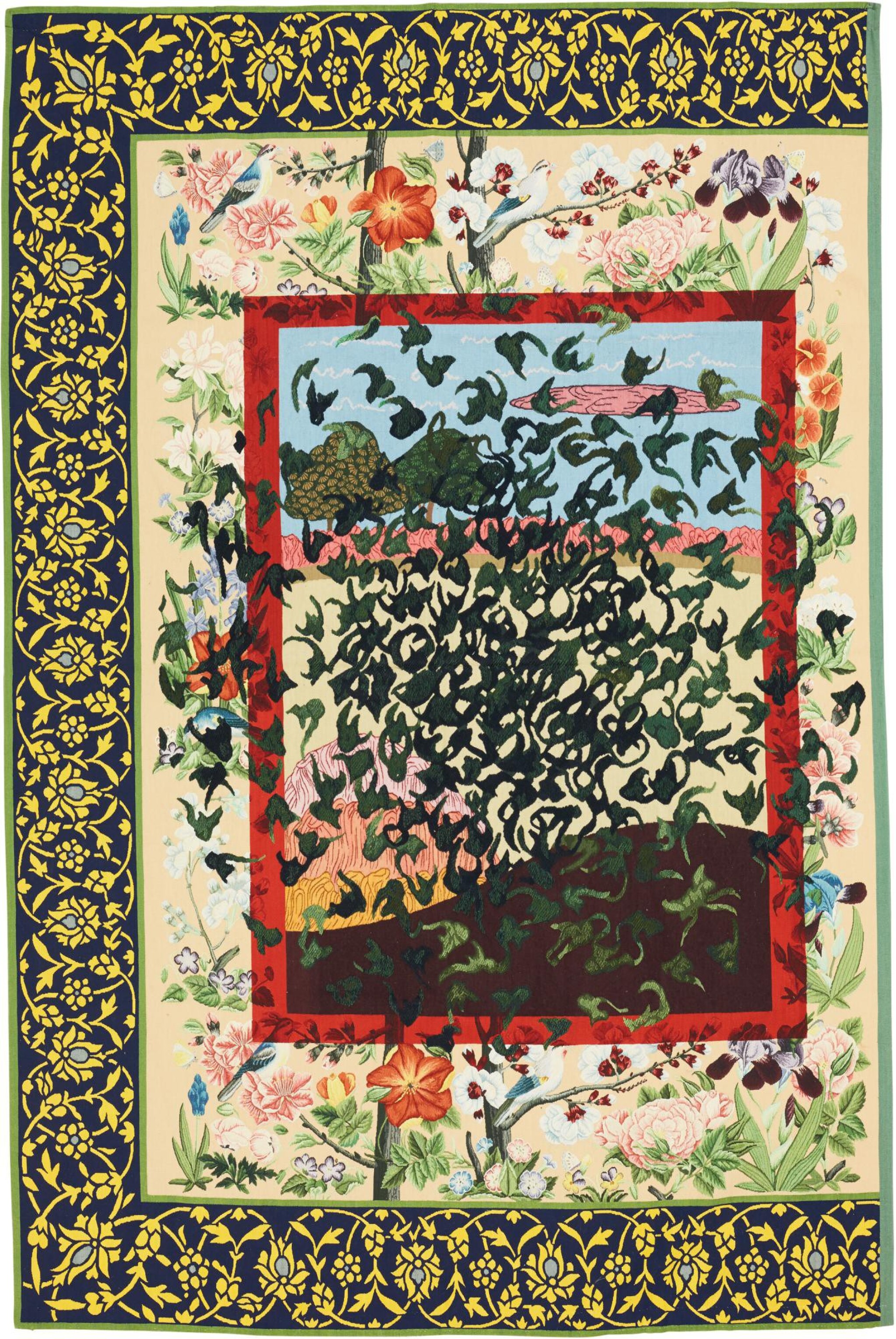 Signed 'Shahzia' on a label on reverse bearing the title, date, edition and series name

‘Demons, Yarns & Tales’ was an exhibition organised by London art organisation, Banners of Persuasion, shown in London, Miami and New York between 2008 and 2010. Fifteen acclaimed contemporary artists, including Kara Walker, Grayson Perry and Beatriz Milhazes, were invited to forgo their typical medium and design a tapestry. Pathology of Suspension was the design created by Pakistani-born and American-based Shahzia Sikander for this remarkable artistic project, of which the current lot is the third of five editions.

In her wool and silk tapestry, Sikander has scaled up one of her previous works, a 2006 silkscreen, gold leaf and gouache work titled The Illustrated Page, currently in the collection of the Philadelphia Museum of Art (https://www.philamuseum.org/collections/permanent/299012.html?mulR=1360672483%7C390). The original is a diptych, devised to resemble the double page spread of an open book. Each page presents a rectangular landscape inspired by Indian and Persian miniature painting – artistic traditions Sikander studied at the National College of Arts in Lahore in the early 1990s – surrounded by decorative borders. Pathology of Suspension borrows its format from the left-hand page of the 2006 work, so explaining the missing border along the right edge. The outside border of the tapestry, with its yellow on black repeated floral patterning, remains very similar to that of the original, whilst the space between the border and inner landscape has been reinvented by Sikander, into an area replete with ornate flora and fauna, reminiscent of the botanical watercolours of colonial India.

Discussing Pathology of Suspension with art critic Sarah Kent, Sikander notes “Over the centuries, a lot of influences went back and forth between Europe and Asia through the East India Company, for instance; and a lot of the borders were influenced by Dutch prints. I observe these relationships, but I don’t approach things in an art historical manner.” (S. Sikander quoted in C. Sharp and S. Kent, Demons, Yarns & Tales: Tapestries by Contemporary Artists, Damiani Editore, Bologna, 2008, p. 96)

The stylised and flattened landscape in the centre of Pathology of Suspension is taken from the right-hand page of The Illustrated Page. In both works, a circling throng of dark silhouettes darts atop the candy-coloured central scene. These shapes first appeared in Sikander’s video work SpiNN (2003) and are the simplified form of the dark hair of the devoted gopis (milkmaids) of Lord Krishna (Kent, Demons, Yarns & Tales, p. 98). Sikander cleverly uses these cut-out shapes to assume the appearance of black airborne birds, which in the current lot break out of the tranquil landscape to create a circle of movement and energy.