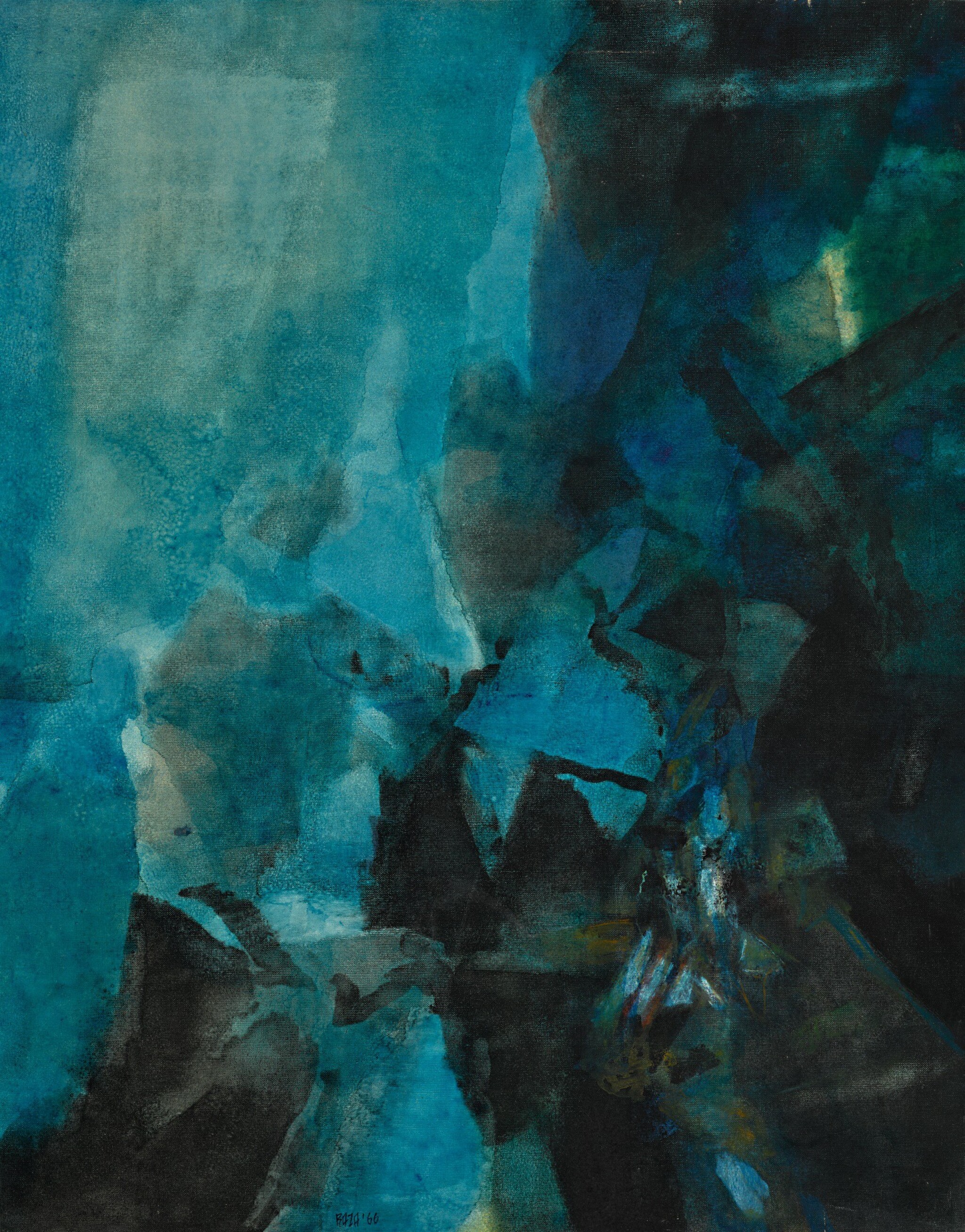 Abstract Expressionism was a non-representational art movement championing freedom, spontaneity and emotional expression. This painting style, developed in New York in the 1940s and 50s, was broadly divided into two groupings of artists: Action painters like Jackson Pollock and Sam Francis who smeared, splashed or dripped paint with gestural abandon; and Color Field painters such as Mark Rothko and Clyfford Still who filled their compositions with large, flat areas of a single colour. In 1962, Sayed Haider Raza, co-founder of the Bombay Progressive Artists’ Group, moved from France to America to work as a visiting lecturer at the University of California, Berkeley. It was here that he first witnessed the experimental and compelling paintings of the Abstract Expressionists, an experience that was to have a profound influence on the development of his own artistic style.

In France in the late 1950s and early 1960s, Raza had painted European landscapes and village-scapes through a semi-abstract aesthetic. Following his American encounter with Abstract Expressionism, the recognisable scenes and identifiable architectural features of Raza’s compositions disappeared, as the painter became concerned with conveying emotion rather than tangible forms in his work. According to Raza, “A painting has to be seen, and to be felt. It has to be felt -- through all the senses”, and he achieved this visceral function of art through an expressive use of colour, texture and gesture. (S. H. Raza quoted in G. Sen, Bindu, Space and Time in Raza's Vision, Media Transasia, New Delhi, 1997, p. 148)

Presence Inconnue – French for ‘Unknown Presence’ – was painted in 1966 and is a prime example of Raza’s growing preoccupation with feeling. In this work, Raza uses vibrant colour, contrasting flashes of light and shadow, and spontaneous, fragmented forms to create an absorbing and contemplative composition, one evocative of the blue hour of twilight. The meditative quality of the painting is reminiscent of the work of Rothko, whose compositions centred on a powerful encounter with the unknown. The present work by Raza – in both its title and essence – similarly invites the viewer to lose him or herself in the unknown.

'What is created in Raza's fragmentation of forms are analogies - not the outward manifestation of reality as in his earliest works, or the imaginary landscapes in his early gouaches - but the "real thing", through the substantial realm of colour. There is vigour here, and there is an irrepressible rhythm; but it is no longer nature as "seen" or constructed, but nature as experienced.' (G. Sen, Bindu Space and Time in Raza's Vision, New Delhi, 1997, p. 79)