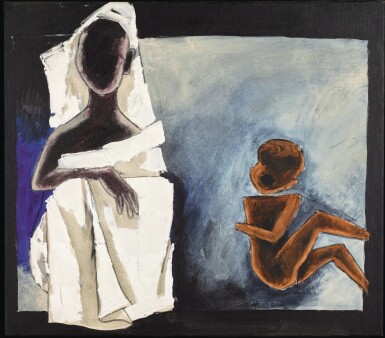 Acquired from a Canadian collector who had purchased it from an exhibition of Husain’s work in Gallery Esperanza, Montreal in the 1970s.

This sensitive painting is a continuation of Maqbool Fida Husain's famous 'Mother Teresa' series. Here, a faceless woman is depicted in a white sari alongside an orphaned infant. The painting is not only a representation of the Mother and her mission but also recalls classical imagery of the Madonna and Child that could be interpreted as a commentary on the artist's relationship with his own mother. Yashodhara Dalmia comments, 'Husain's women are always enshrouded in an invisible veil, the simplicity of their form countered by their inaccessibility. They could well be women from his own childhood in a Muslim household, where the feminine presence alternates between the secretive and the visible. The suppressed yearning could be for his mother, who died when he was only two years old, leaving him feeling permanently bereft.' (Y. Dalmia, The Making of Modern Indian Art: The Progressives, Oxford University Press, New Delhi, 2001, p. 111).