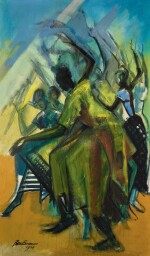 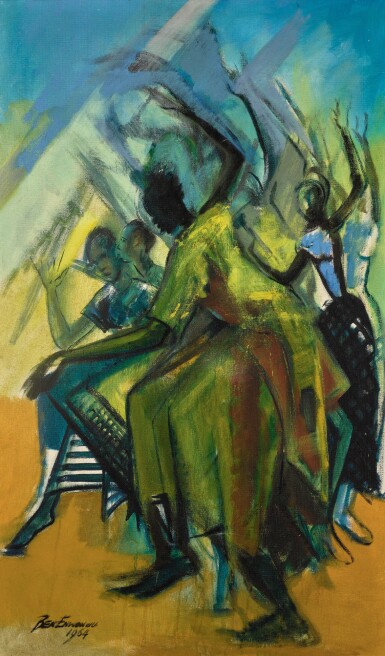 Summary: This excepting, this work is in very good condition.

This work is framed.

Please telephone the department on +44 (0) 207 293 6323 or email africanctp@sothebys.com if you have any questions regarding the present work.

Enwonwu first embarked on his Africa Dances series during his time studying in London in the 1940s, in reaction to Geoffrey Gorer’s 1935 book of the same name. The book critiques colonial rule and its impact on traditional life in Africa. In the Africa Dances series, Enwonwu illustrates his own views on the state of modern Nigerian culture at the time, using symbolic imagery in scenes of dance, and ritual performance from his Onitsha-Igbo heritage. Recognising the importance of heritage and culture, indigenous ritualistic dances of the Igbo people in the south-eastern region of Nigeria was a great source of influence for Ben Enwonwu. His evolution as an artist could be expounded in how he saw movement in the figures he learnt to carve in a sacred shrine at a young age. Enwonwu revisited the theme throughout his career, exploring a range of dance forms, from masquerade and traditional ceremonies, to modern dance and performance. Earlier paintings in the series include Africa Dances/Agbogho Mmuo (1949) and Dancing Girls (1951-54).

Enwonwu had received a scholarship to study in the UK in 1944, where he attended Goldsmiths College and the Slade School of Fine Arts. During this time, he engaged with the international art world, studying modern European art movements such as Italian Futurism, and engaging with the Pan-Africanism movement that has its roots in the Harlem Renaissance; all these influences are clearly illustrated in the present lot. On his return to Nigeria in 1948, Enwonwu became Artist Adviser to the Federal Government. Among his many accolades, Enwonwu was awarded an MBE in 1955 by Queen Elizabeth II, and the following year he became the first African artist to receive a royal commission when she sat for a large bronze sculpture, now at the entrance to the Parliament Buildings in Lagos. By 1964, when the present lot was painted, Enwonwu was internationally recognised as Nigeria's premier artist.

By 1964 the series had also taken on another dimension in Enwonwu’s quest to represent modern Nigeria. Nigeria gained independence from the United Kingdom on 1 October 1960, and with it the country was in search of a new post-colonial identity. Weary of the hasty acceptance of European abstraction amongst Nigerian artists, Enwonwu, in 1963 wrote the article Into the Abstract Jungle: A Criticism of the New Trend in Nigerian Art. The article was perceived as an attack on abstraction by his peers. However, Enwonwu’s presupposed opposition to abstraction was misunderstood, and the present lot perfectly exemplifies the artists mastery of employing European techniques to convey African subject matter in both abstract and figurative forms, which is what was implied in his writing. Enwonwu advocated a new modern Nigerian national culture, and it was in this context that Enwonwu created Africa Dances (1964), illustrating his views on modernity and tradition. Permeated with rich tones of blue and green, the present lot displays Enwonwu’s maturity as a colourist, as well as a mastery of form and composition.