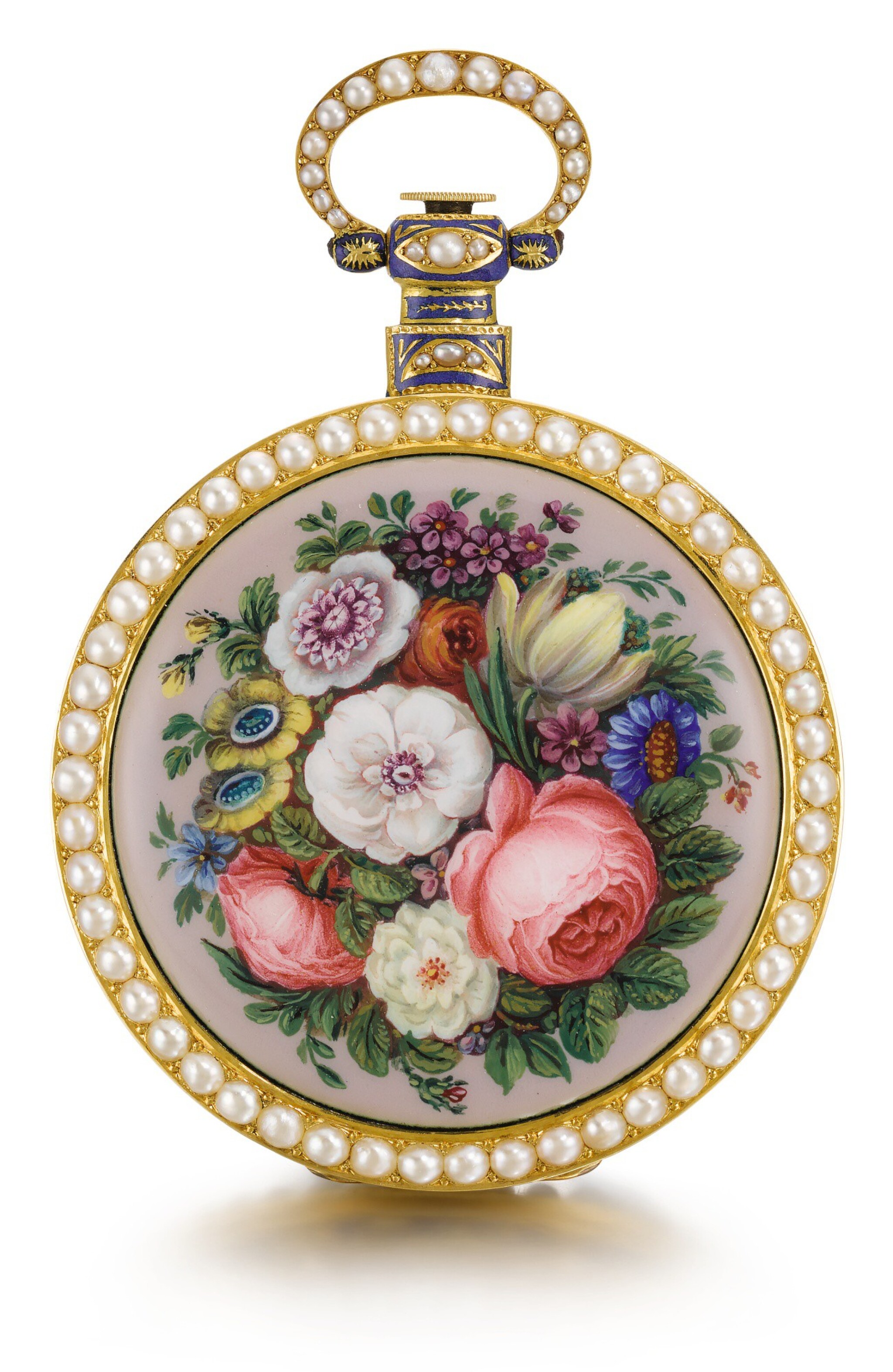 A FINE GOLD, PEARL AND POLYCHROME ENAMEL PAINTED DUPLEX WATCH MADE FOR THE CHINESE MARKET

• Case: gold, the back with polychrome enamel painted bouquet of flowers, split-pearl-set bezels and bow, the band decorated with stylised foliage heightened with translucent red and amber enamel, pusher through pendant to open case back, glazed hinged cuvette with milled bezel, case numbered 823 to the bezel and the back of the main case panel, panel additionally numbered 6

Movement: not running at time of cataloguing, however, with slight impulse given to the balance it will briefly run engaging the escapement and the centre seconds hand will move as expected. Quite possibly just old oil and would benefit from a clean and overhaul. Dial: inspected only through crystal at time of cataloguing but appears to be in good condition. The tip of the minute hand is broken. Case: enamel panel in good overall condition. The band with a few small chips and scratches. Approximately half a dozen of the pearls appear to have been drilled for stringing and have therefore presumably been replaced. Small pusher at the edge of the cuvette for opening the hinged cuvette, the release is a little stiff at present.

Between 1807 and 1815, watchmaking in Fleurier suffered a significant slowdown in trade, caused in large part by the Continental Blockade and, as a consequence, many watchmakers were forced to change career. It was during this period, in 1814, that three Bovet brothers, all skilled watchmakers - Frédéric (b.1786), Alphonse (1788-1850) and Edouard (1797-1849) - left Fleurier to work in London. In 1818, Edouard was hired as a watchmaker by the Maison Magniac, a firm involved in the watch trade in Canton, China. Arriving in Canton in August 1818, Edouard quickly recognised the trade potential with China and contacted his brothers to discuss developing their interests in the region. The brothers began forming their company in January 1820, with Edouard working in Canton, Frédéric and Alphonse remaining in London and another brother, Gustave (1790-1835), engaged in Fleurier. On 1 May 1822, the Bovet company was officially registered in London, however, operations were soon to be headquartered back in their hometown of Fleurier where the brothers’ sister, Caroline (b.1807), would also later join the firm.

Maison Bovet’s successful introduction of a new style of watch, destined for China, quickly allowed the firm to secure a dominant position within this export market. As a consequence, Bovet transformed the fortunes of Fleurier, giving a new energy to the watchmaking trade and ushering in an era of prosperity for the town. From the outset, in addition to selling good quality watches, Edouard Bovet was determined to offer a range of exceptional and highly luxurious watches, decorated using the finest techniques and materials, that would be aimed at the wealthiest Chinese clientele. These watches would invariably incorporate a highly decorated movement with duplex escapement and a glazed cuvette above, through which the so-called Chinese calibre could be admired by its owner. Among the decorative scenes skilfully painted in enamel to the backs of cases, flower arrangements were a particularly popular theme.

In 1824, Edouard was joined in China by his brother Charles-Henri (b.1802) who, from 1830-1836 was the Maison Bovet’s main representative in China; he returned to Switzerland in 1839. Meanwhile, Edouard had returned to Fleurier and would go on to establish a further factory in Besancon with Charles Lorimier, the factory there producing Chinese market watches which were exported together with Bovets other products. The sons of the second eldest founding brother, Alphonse, would continue the Bovet firm – they were Frédéric known as Fritz (1824-1914), Alphonse 1828-1918), Gustave who was born in Chang-hai (1835-1906) and Charles (b.1838). They were joined by Louis (1818-1882), the son of Gustave the elder. Louis would travel to Canton in 1836 to work with his uncle Charles and was joined in 1838 by his childhood friend Auguste Jeanneret when Charles returned to Europe. In 1880 the firm changed its name to Bovet Frères. For a detailed history of the firm, see: A. Chapuis, La Montre Chinoise, 1919.