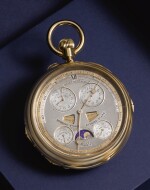 Second - silver, finely engine-turned ground, outer sector for equation of time indication, four polished subsidiary dials for sunrise, sunset, moonrise, moonset, two wedge-form apertures revealing gold discs indicating the morning and evening stars, outermost gold ring with signs of the zodiac, central gold hands one tipped with a star for equation, the other with a globe for indicating the zodiac, small aperture beneath bezel for regulation

• Case: massive 18ct yellow gold double open-faced, both bezels twin-stepped and rounded, three short slides to the sides for selecting strike/silent, hours & quarters/quarters only and trip repetition, both covers glazed and hinged, short lever adjusters beneath the bezel for adjusting day, month and date, the gold pendant and bow with London hallmarks for 18ct gold

Enamel dial appears to be in good condition. Silver dial - engine turning remains crisp, some very light spots and some light scratches to the subsidiary dials, a little loss to some of the black numeral infill.

Case: in good overall condition with some light polishing.

Remarkable and highly important, at the time of its production the Dent Ultra Complication was one of the most sophisticated watches ever made. With a total of 19 complications, the watch has just five fewer functions than the Henry Graves Supercomplication which was made by Patek Philippe a quarter of a century later. The Dent Ultra-Complication was the product of a unique collaboration between the English firm Dent, the Swiss company Capt & Cie. of Solliat and the watchmaker Léon Aubert of Le Brassus. Almost certainly following a special request by one of their clients, Dent commissioned Capt & Cie. to produce the various complications required for the extremely complex movement. A letter dated 8 January 1904 written by Capt shows an approach made to Léon Aubert with details for the commission of calendar and astronomical mechanisms that were almost certainly intended for the present watch [see: Chronométrophilia, Daniel Aubert, Une Montre Exceptionnelle l’Astronomique – Dent No. 32573, Winter 1988, No.25, p. 17]. Original design drawings by Léon Aubert showing the astronomical and perpetual calendar mechanisms are reproduced in the same publication (see op. cit. cover image and p.12).

The movement of the Dent Ultra-Complication is of exceptional quality and executed on multiple levels. The perpetual calendar mechanism is a skeletonised module which fits beneath the time dial and above the movement’s repeating and striking work. However, it is the astronomical indications which are the most extraordinary, especially those calculated to determine the time of moonrise and moonset. In his article for Chronométrophilia, Daniel Aubert relays in detail the extraordinarily complex calculations and gearing required to produce a continuous, highly accurate indication for the moonrise and moonset. In order to display the moonrise and moonset, the watch is geared to account for two consecutive passages of the moon over the meridian, an interval which is on average 24 hours, 50 minutes and 30 seconds. One sidereal moon revolution takes 27 days, 7 hours, 43 minutes and 11.5 seconds. For a detailed explanation of the lunar calculations see: op. cit. pp. 19-23.

The front dial displays standard time with the addition of a perpetual calendar. The perpetual calendar displays the correct day of the week, date of the month and month of the year regardless of the length of the month. It also automatically adjusts for the leap year. Since the duration of the Solar year is 365 days, five hours, 48 minutes and 48 seconds and the mean year is 365 days, an extra year is added every four years (leap year) and a further adjustment is made with the omission of a leap year every four centuries. According to the Gregorian calendar reforms of 1582, century years that are divisible by 400 without remainder are to be considered leap years. Consequently, the perpetual calendar of this watch will be accurate until the year 2100, when the calendar will need to be readjusted for the first time.

The central sun-tipped equation of time hand indicates to a semi-circular track which is calibrated to show the difference between apparent solar time (the time as indicated by a sundial) and mean time (the average of solar time). Since the Earth is in an elliptical orbit, the difference between mean and solar time ranges from plus 14 minutes 59 seconds to minus 16 minutes 15 seconds, solar time agrees with mean time on or about 15 April, 15 June, 31 August and 24 December. A second central hand with sphere-form terminal indicates the current sign of the zodiac which is shown at the edge of the dial. Four subsidiary dials separately show the times of sunrise and sunset and moonrise and moonset. Three apertures indicate the moon phases (with its age calibrated to the edge) as well as the morning and evening stars. The apertures for Morning and Evening Stars show the current visible planet or planets and are displayed in the relevant apertures - the named planets are Venus, Jupiter, Mercury, Saturn and Mars and these may be seen singly or in pairs within the apertures.

Léon Ernest Aubert 1845-1920 was apprenticed to Magnenat of Solliat and in 1872 established a small workshop for himself in Le Brassus. Aubert specialised in the production of perpetual calendar mechanisms and astronomical indications for pocket watches, largely supplying watchmakers working in the Vallée de Joux. The finished watches were usually sold, as is so with Dent 32573, under a further final name [see: K. Pritchard, Swiss Timepiece Makers, Vol. 1, p. A-68]. Daniel Aubert has researched and written extensively on the work of his grandfather, Léon Aubert. Daniel has written that Léon invented a mechanism for displaying the equation of time in c.1895 and delivered mechanisms for the display to Victorin Piguet and Patek Philippe; these Daniel Aubert states included Patek Philippe no.111.505, for an illustration of which see: M. Huber, A. Banbery, Patek Philippe, 1982, pp. 201-202, figs. 173a-c. Daniel Aubert has also noted that Léon, together with one of his apprentices, Paul Auguste Golay, worked together on Patek Philippe no. 198.023 made for James Ward Packard [see: Pritchard, Swiss Timepiece Makers, p. A-68 and for an illustration see Huber, Banbery, Patek Philippe, pp. 225-226, figs.206a-d]. A further movement with equation of time that was developed by Léon Aubert for the firm, Golay Fils & Stahl and numbered 28432, was sold at Sotheby's Geneva, 19 May 1992, lot 270. The latter watch was made for the Maharaja of Patiala and incorporated minute repetition, equation of time, perpetual calendar, moon phases and times of sunrise and sunset.

The following is an extract from a translation of Léon Aubert’s obituary featured in Antiquarian Horology: “With him has disappeared one of the last capable workmen of the old school, working peacefully at home on those admirable complicated calendars…He told us, two years ago, that he had just celebrated the completion of 60 years at the bench, with the delivery of one of those extra complicated mechanisms which were his speciality and which have certainly been worth considerable honour to those watch manufacturers to whom they were destined. And yet, he added, I have not earned a living with them, he who could have earned a fortune with his horological talents!” [see: Antiquarian Horology, March 1987, pp.510-511, D. Aubert with translation by A. G. Randall, Golay Fils & Stahl Sunrise & Sunset Watch no.28432.]

Capt & Cie (successors to Nicole & Capt) were founded in 1875 at Le Solliat in the Vallée de Joux under the name Capt & Meylan. A Capt & Meylan visiting card reproduced by Daniel Aubert in his article for Chronométrophilia emphasized the firm’s specialism for making watches in the English style, as well as their expertise in the production of complication watches, including repeaters, split seconds chronographs, perpetual calendars and clock watches (see: Chronométrophilia, Winter 1988, No.25, fig. 8, p. 16). Such specialism in complication watches in the English style would have made them ideally placed to fulfil the exacting order of Dent.

The enamel dial of the present watch is signed Willis to the reverse. The Willis family were one of the finest and arguably the highest regarded English dial makers of the 19th and early 20th centuries. An advert for T. J. Wills from 1889 notes that the firm was established in 1787. F. J. Britten in his book Old Clocks and Watches and their Makers notes the enameller John Willis as initially active in Smithfield, London, from 1820-1836. His son Thomas John, ‘an excellent dial maker’ continued the business, moving premises to 10 Rydon Crescent, London EC and later to 19 River Street, Myddelton Square, London, EC. Thomas John died in 1893 aged 57. Following Thomas John’s death, his firm continued to produce dials into the 1920s (see op. cit. 9th ed. 1982, p.647.) An advertisement in the 1889 Antiquarian Horology noted T. J. Willis’s speciality of ‘Venetian Enamel Dials’ – these dials had a distinctive, creamy, off-white colouring to their surface.

Edward John Dent was born in 1790 and apprenticed at the age of 14 to his grandfather, a tallow chandler. Fortunately, at this time, he lodged with his cousin Richard Rippon a watchmaker. Through the influence of his cousin he became so interested in horology that his grandfather allowed him to transfer the remaining years of his apprenticeship to Edward Gaudin, another watchmaker, in 1807. He quickly established a reputation as an excellent craftsman and between 1815 and 1829 worked as a chronometer maker for several firms including Vulliamy, Barraud and McCabe. By 1830 he was so highly regarded that he was invited by John Roger Arnold to enter into a partnership with him at 84 Strand, London; the partnership was to last ten years. In 1831 Dent was admitted to the Clockmakers’ Company and became a Freeman of the City of London. In 1840 Dent set up a business on his own at 82 Strand and by 1843 had opened further premises at 33 Cockspur Street, the address on the dial of the present watch. Edward Dent died in 1853 and his business was inherited and split between his two stepsons Frederick and Richard Rippon on condition that they took their stepfather’s family name. Frederick took over management of the firm's shops at the Royal Exchange and the Strand, whilst Richard inherited the Cockspur street shop. Frederick and Richard did not long outlive Edward Dent, with Richard dying three years and Frederick seven years after their step-father. Richard's side of the business was inherited by his widow Marianna Frederica and was renamed M. F. Dent and Frederick's side was inherited by his mother and sisters, Elizabeth and Amelia. Of all Edward John Dent’s achievements, he is probably best remembered for being the clock maker who was awarded the contract to build the great Westminster clock, now popularly referred to as ‘Big Ben.’