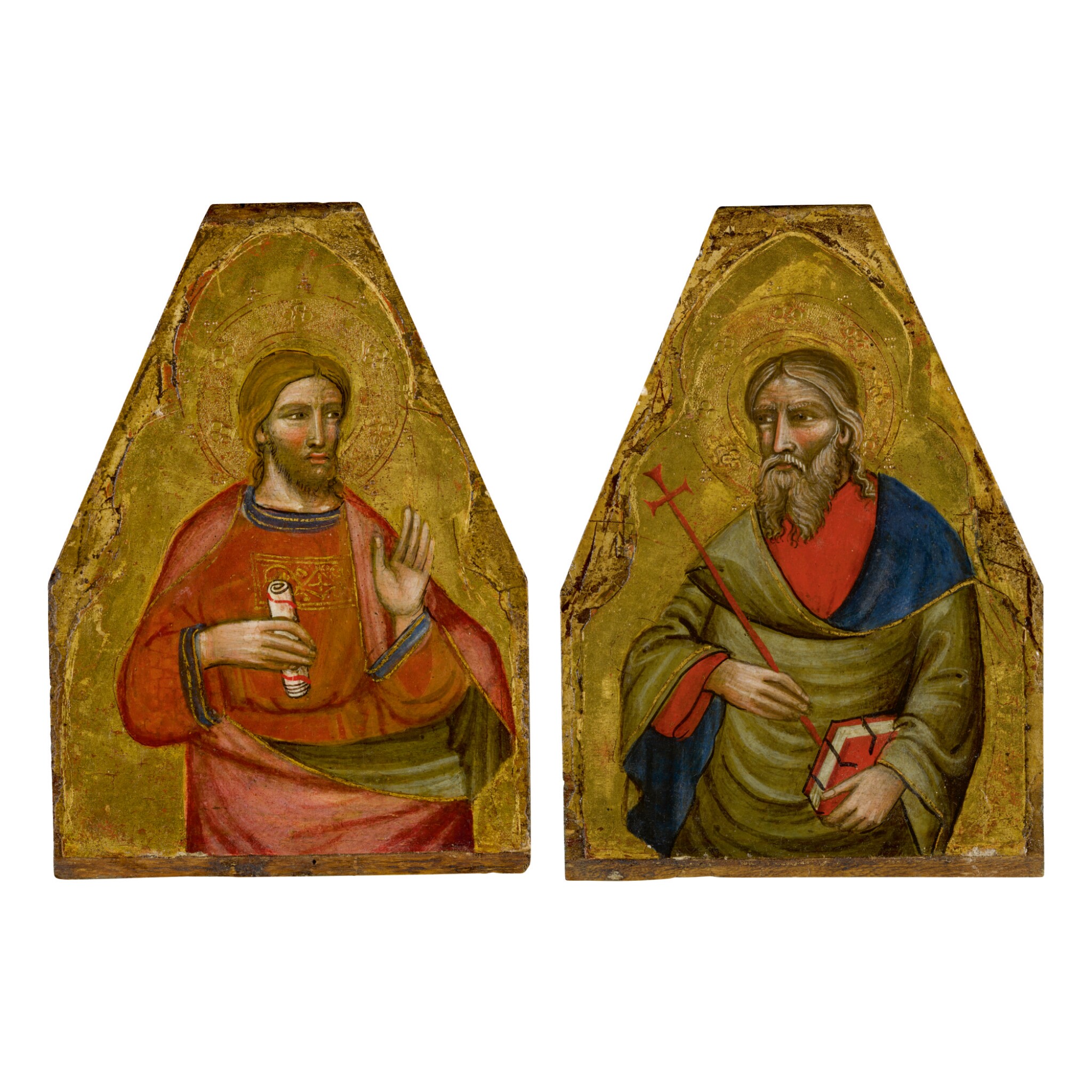 Active in Venice 3rd quarter of the 14th century

SAINT ANDREW AND A MALE SAINT

a pair, both tempera on panel

This pair of paintings is in very good condition overall. The varnish to the figures is slightly uneven and could be improved. Both panels have been thinned and show vertical wooden battens which may not be glued to the panel. These reinforcements seem to have been added to secure the panels in the frames rather than to address any structural issues.

The saint holding the red cross shows a retouching in the blue fabric in the shoulder on the right, and a couple of small dots in his left hand. The saint holding the scroll has developed slight weakness in his red robe. There are a few spots of retouching added to address some cracking and weakness in the darker colors of the shadows of the robe, and a couple of tiny dots in his forehead.

The artist of these panels of saints takes his name from a painting formerly in the Church of Santa Maria in the town of Duci, near Teplice, in the Czech Republic, now displayed in the Diocesan Museum of Litomerice.1  Miklós Boskovits first coined this name when adding to the artist’s oeuvre three other panels, Saints Anthony, Nicholas and Catherine, offered at London, Christie’s in 2003.2  While very similar in form to the present saints, the figures in the London panels are set further forward in the pictorial frame, and the shaped edge of the now absent framing element would have overlapped the halos which are outlined in red. While the London panels would have been pinnacles, the horizontal grain of the present pair suggests they were once predella panels. Mauro Minardi, to whom we are grateful for confirming the attribution of the present paintings and for his assistance in the cataloguing of this lot, has proposed that these panels would have originally formed part of an altarpiece with another predella panel of an apostle sold in these rooms in 20153 as well as with a Christ, another Apostle and a Saint Peter, formerly Moratilla collection, Paris.4

4. The location of the Moratilla panels is now unknown, but they are listed in the Fondazione Zeri Fototeca archive as the Master of the Pesaro Crucifixion, entry nos. 5233-5235.