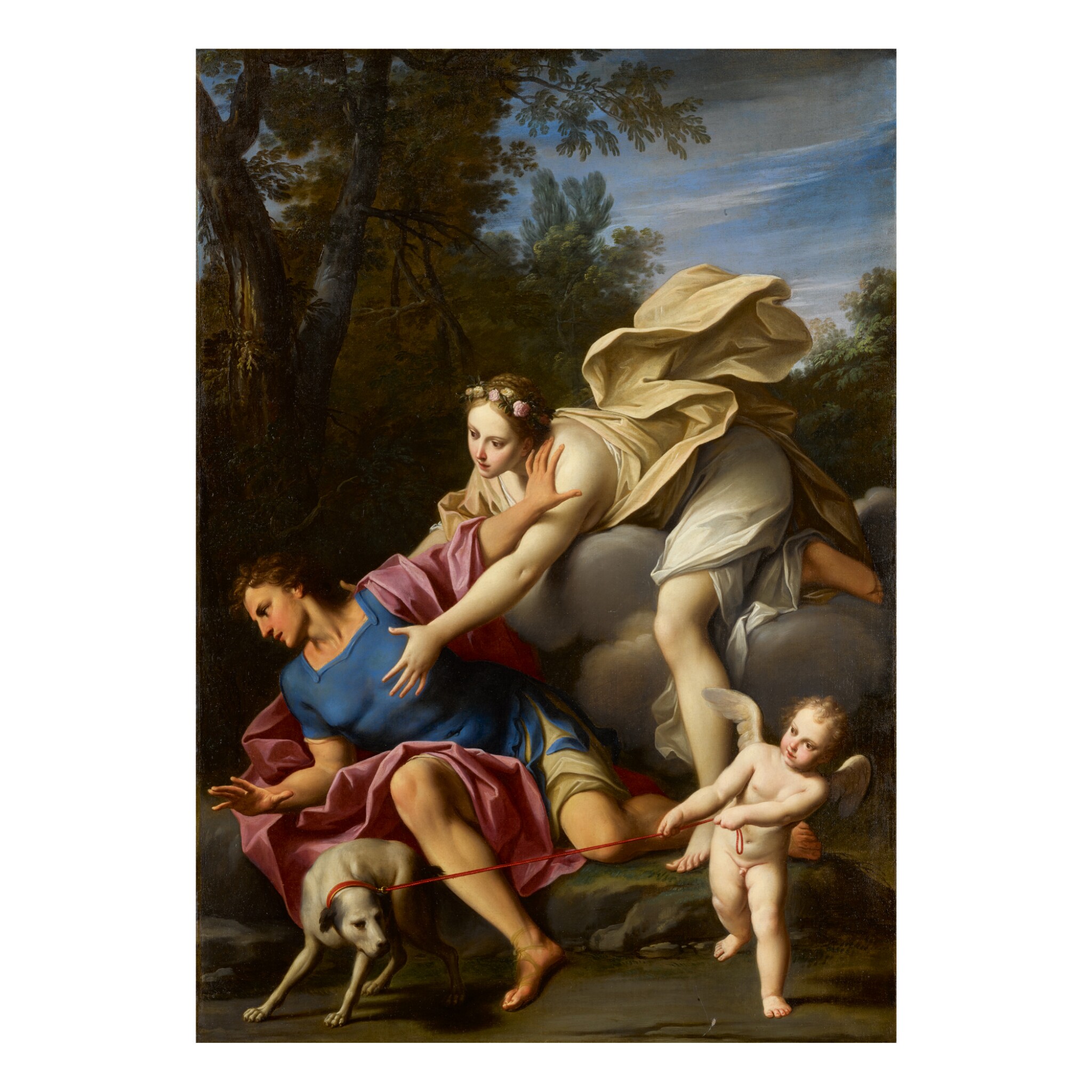 This work is in particularly good condition. The canvas appears to be unlined. There may have been a lining in the past that was removed. The paint layer is stable, and its texture is very attractive.

Some weakness has received retouching in the deeper shadows of the maroon gown worn by the male figure. There are a few spots in the darkest colors of the foliage in the upper left. The profiles of the pine tree in the upper center have weakened and have attracted some retouches. There are a few tiny isolated spots of retouching within the figure. There is a scuff on the bottom edge beneath the feet of the putti in the lower right that should be repaired. The work can otherwise be hung in its current state.

Commissioned by Dominik Andreas, Graf von Kaunitz, Austerlitz, 1700 (not in collection sale of 1820);

This mythological scene is recorded in Franceschini’s account book in July 1700 as part of a commission for the “Principe di Cannitz,” presumably Dominik Andreas, Graf von Kaunitz at Austerlitz, founder of a celebrated collection of paintings expanded by his descendants.1 Along with Aurora and Cephalus, the artist painted an untraced pendant of Bacchus and Ariadne, both tales of unrequited love. The present subject, a relatively rare one, is only mentioned in the account book once more, as an oval format painting in 1726. This painting was not included in the sale of the Kaunitz collection in Vienna on 13 March 1820. The mortal Cephalus received from Diana, goddess of the hunt, a spear that could not miss and a dog, pictured in the foreground being restrained by a putto, that always caught its prey. Aurora, goddess of the dawn, shown here with roses in her hair to symbolize the “rosy-fingered dawn” of classical poetry, fell in love with the married Cephalus and attempted to make him stray from his mortal wife, Procris. Franceschini has pictured the moment of a rejected embrace, when Cephalus pries himself away from the lovestruck goddess. Meanwhile, Procris, suspecting her husband was unfaithful, witnessed the seduction from the forest nearby. Hearing leaves rustling, Cephalus mistook his wife for an animal and launched his spear, inadvertently killing his own wife, to whom he had in fact remained faithful.

Franceschini’s classicizing style is appropriate to the painting’s noble patron and its learned subject matter and illustrates his facility with the dominant pictorial idiom of the late-seventeenth and early-eighteenth century. Aurora and Cephalus’s positions create a strong diagonal emphasis in the composition that conveys the dramatic consequences of the ill-fated affair. According to Ian Kennedy, the artist’s influence on his younger colleague Donato Creti can be detected in the figure of Cephalus.2