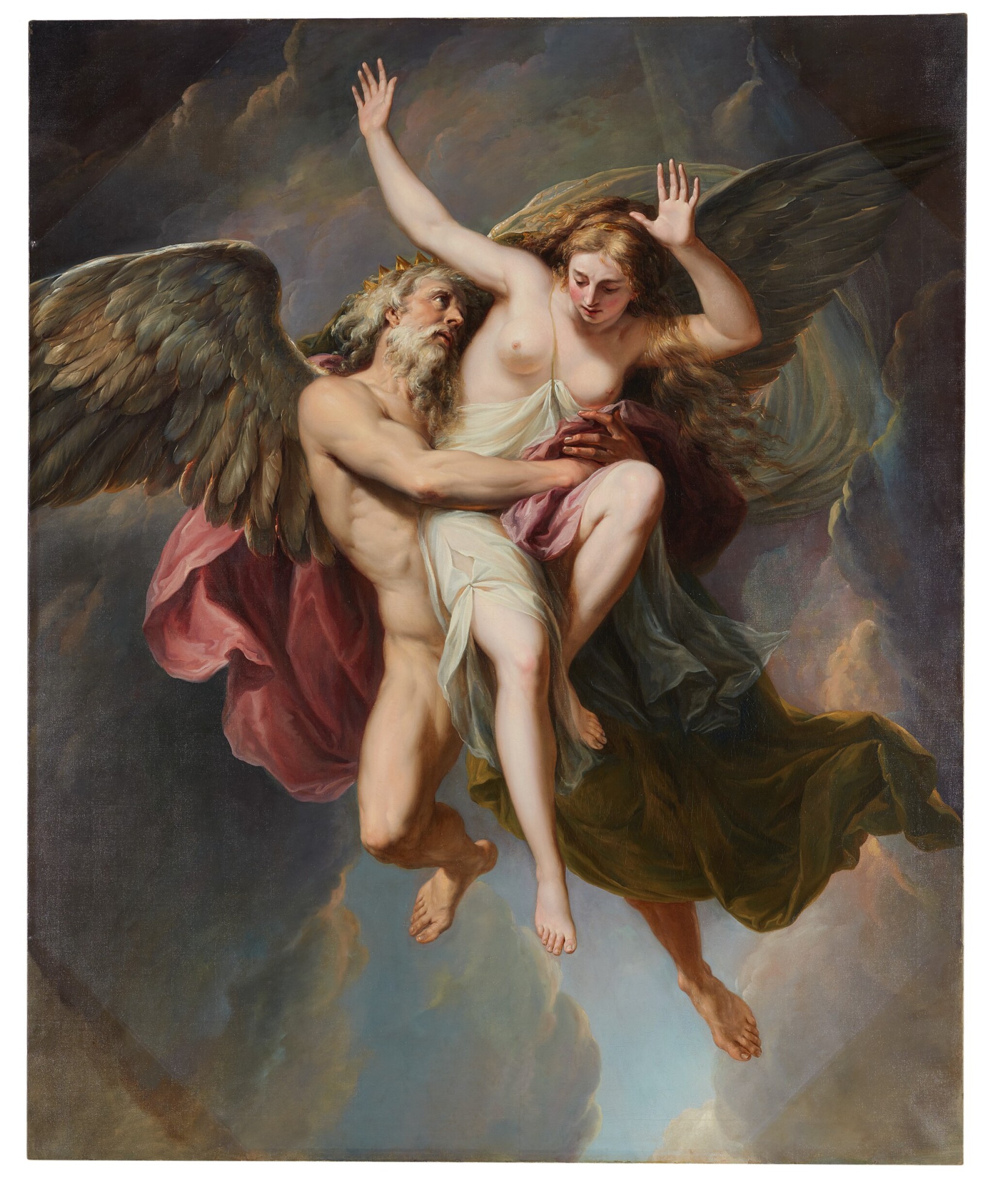 oil on canvas, in a contemporary Neoclassical English carved giltwood frame with motifs of the four winds in the corners

This work is in very good condition. Although the tacking edge of the canvas have been reinforced, the canvas itself does not appear to be lined. On the reverse, there are two reinforcements addressing a break in the canvas in the upper right about 3 inches to the right of Oreithyia's right forearm. This seems to be the only structural restoration. The texture of the paint layer is extremely well preserved. The remaining retouches are almost all confined to cracking which has developed as the result of pentimenti. A few cracks have been restored in the lighter colors of both figures. There is very slight weakness to some of the thinnest colors in the shadows, for instance in the green fabric in the lower right, but the paint layer is generally very healthy throughout. The four corners are covered by the original frame, and the work is apparently not restored in these spandrels. The work looks well and should be hung in its current state.

This large and dynamic canvas of Boreas and Oreithyia—notable for its harmonious color palette, exquisite detail, and remarkable technique—is among the finest works made by Giovanni Battista Cipriani, an Italian born artist active in England from about 1756 until his death in 1785. Cipriani exhibited this masterpiece in 1776 at the Royal Academy in London, and soon after, the painting entered the collection of one of his great patrons George Walpole, 3rd Earl of Oxford. This painting hung in Walpole’s Saloon at Houghton Hall alongside other large-scale works by Cipriani until the early twentieth century. The story of Boreas and Oreithyia comes from Ovid’s Metamorphosis (Chapter 6: 692-722). Boreas, the Greek wind God and the brother of Zephyr, fell in love with Oreithyia, the daughter of a legendary Athenian king, taking her as his bride. Here, the two protagonists appear before a crisp and cloud-filled sky as colorful billowing fabrics encircle their beautifully rendered figures. The elder Boreas, known as the fierce North wind, is shown calm and composed with a golden crown and a muscular physique. His feathered wings, which fan the earth and the sea, extend to the edges of the composition. He looks towards the beautiful Oreithyia in his arms, with her long flowing hair, porcelain skin. Her outstretched arms and extended right leg form a strong vertical that helps to further anchor this balanced composition.

Born in Florence in 1727, Cipriani spent his youthful years in Florence and Rome. In 1755, he traveled to England with the sculptor Joseph Wilton and the architect Sir William Chambers, with whom he would regularly collaborate throughout his career. He remained here for the rest of his life, marrying Anne Booker in 1759, and he would go on to be one of the country’s most well-known Neoclassical history painters. In his new home, Cipriani established himself quickly within English artistic and social circles, regularly welcoming commissions to decorate public buildings and private households, attracting patronage from the likes of King George III, as well as of Lords Charlemont, Tylney and Anson. In 1762, Cipriani collaborated with Chambers on the Gold State Coach for George III, a vehicle that every British monarch has used on their coronation day since George IV. He would later collaborate with Angelica Kauffmann and Nathaniel Dance on production sets at Covent Garden. In 1768, George III nominated him as a Founding Member of the Royal Academy, where he taught figure classes and exhibited regularly from 1769-1779.

Cipriani’s reputation as an artist was further spread by way of engravings after his works made by his lifelong friend Francesco Bartolozzi, who came to London in 1764. In addition to an engraving after studies and drawings that Cipriani made for the present composition, Bartolozzi also produced a colored chalk and watercolor drawing of the scene that he paired with a drawing he made of Zephyr and Flora.1

Among Cipriani’s most important patrons was George Walpole, 3rd Earl of Oxford. In the years after Walpole acquired the present work, he commissioned three additional paintings from Cipriani, likely to hang alongside this painting in Houghton Hall’s Saloon: Philoctetes on Lemnos (1781), Castor and Pollux (1783) and Oedipus on Colonus.3 This group was joined by a vertical painting by another vertical painting by Cipriani of Dido grieving over the Departure of Aeneas (1783).2 In the 1792 Houghton inventory, all of these paintings by Cipriani are listed as hanging in the Saloon. They remained here for over a century until they were moved to storage in the 1920s.

1. It is probable that the present painting was originally exhibited in this frame as a rectangular composition. The spandrels in the four corners of the frame, which illustrate the four winds as reliefs, were likely added so as to match the decorative scheme in the Saloon at Houghton Hall. The carved running pattern along the edges of the frame suggest that it could be a design after William Chambers.