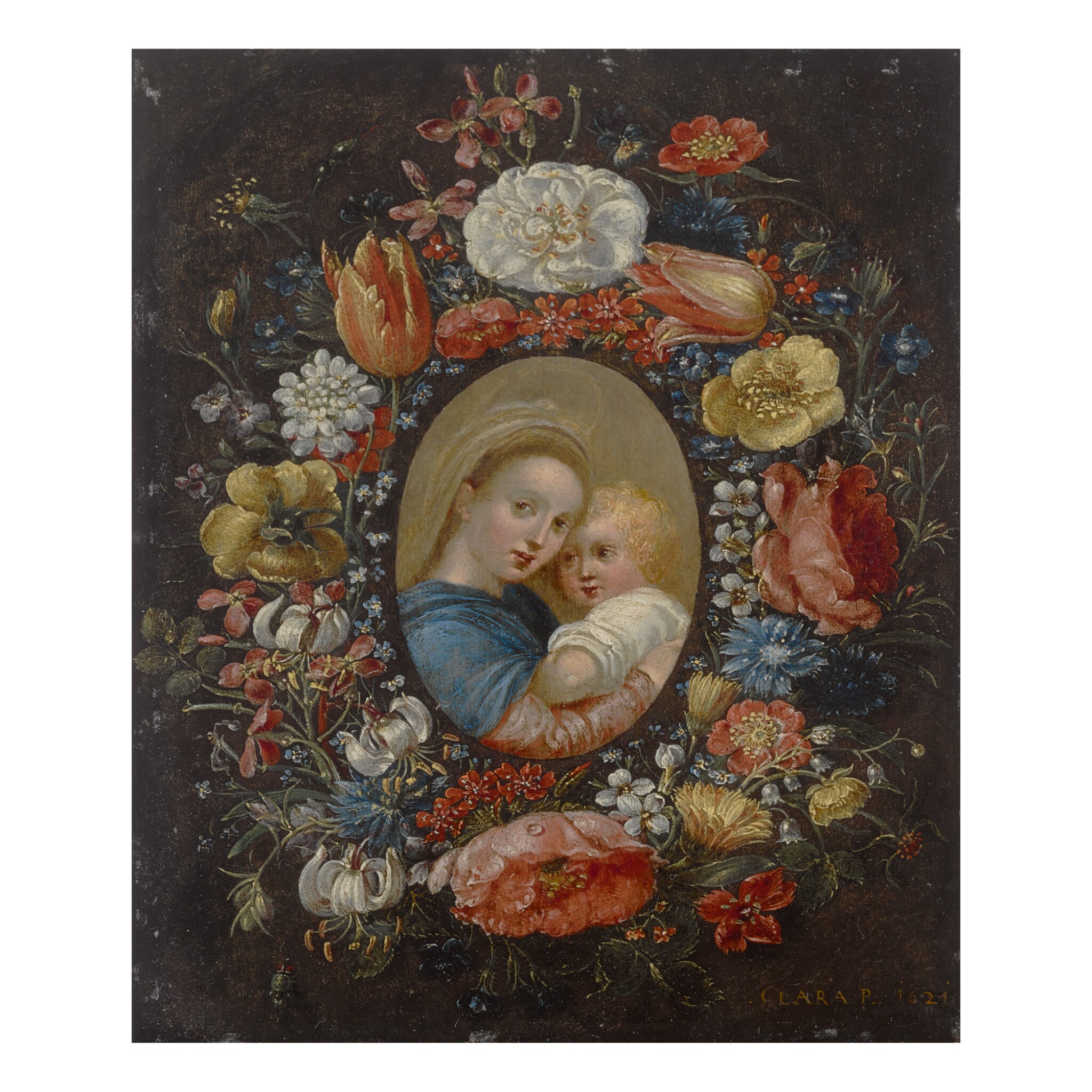 MADONNA AND CHILD WITHIN A FLORAL WREATH

This work on copper is supported by a thin piece of wood, which keeps it secure in its frame. The panel is slightly uneven in the upper left and on the upper right side. The paint layer is stable. The floral garland is in particularly good condition, with no visible retouches. The condition also seems to be particularly good in the Madonna and Child in the center, showing few or no retouches at all. Retouches are not evident under ultraviolet light in the dark background in all four corners, but some thinness has been retouched in the upper right, upper left, and lower left. The condition seems to be better in the lower right around the signature and date. The work is in very good condition overall, and it should be hung in its current state.

Acquired by the uncle of the present owner, 2001.

Together with such artists as Jan Brueghel the Elder and Osias Beert, Clara Peeters was one of the most important contributors to the early development of Flemish floral still-life painting.  The majority of her still lifes are displays of victuals and objects on a table top. Occasionally, these compositions include a bouquet of flowers, but sometimes she also depicted a number of individual bouquets in vases. Most of the individual bouquets in vases are rather simple arrangements; the floral garland discussed here, however, is unique in Peeter's oeuvre. Despite its modest format, this copper is the artist's only known cartouche garland still life known to date. Furthermore, it is Peeters' last known dated work and thus an important document and bookend in the career of this groundbreaking female painter. The Madonna and Child depicted at center is fascinating in that it is the only known example of her figure painting. The figures are based on Raphael's Madonna della seggiola (1513-1514, Florence, Palazzo Pitti). The figures are not slavishly copied from Raphael's original, but rather are reinterpreted into a decidedly more Flemish character in the vein of Rubens' figure handling. Fred Meijer has suggested that they may indeed be based on a print by Aegidius Sadeler II.

Clara Peeters was probably born in or near Antwerp, but no firm facts about her life are known. Her dated works range from 1607 to 1621, with this work being her last dated example.  After Peeters' earliest known painting of 1607, her handling became more accomplished, while the viewpoint was lowered and, generally, her compositions became more complex. Although Peeters' still lifes can be recognized immediately as belonging to the same time frame as those by Jan Brueghel the Elder and Osias Beert, they are also highly individual in their signature use of individual flowers. Here, unlike Jan Brueghel's profuse use of intertwining flowers within his more common wreath still lifes, Peeters arranges eight large flowers around the central figure group. Her hallmark large white rose is placed at the top of the composition, with cup-shaped roses at right and bottom, while tulips, daisies, hedge-roses, pinks, and lily-of-the-valley all occupy distinct space within the composition--quite an accomplishment for a work of this small scale.

We are grateful to Fred Meijer for endorsing the attribution to Peeters, based on photographs.