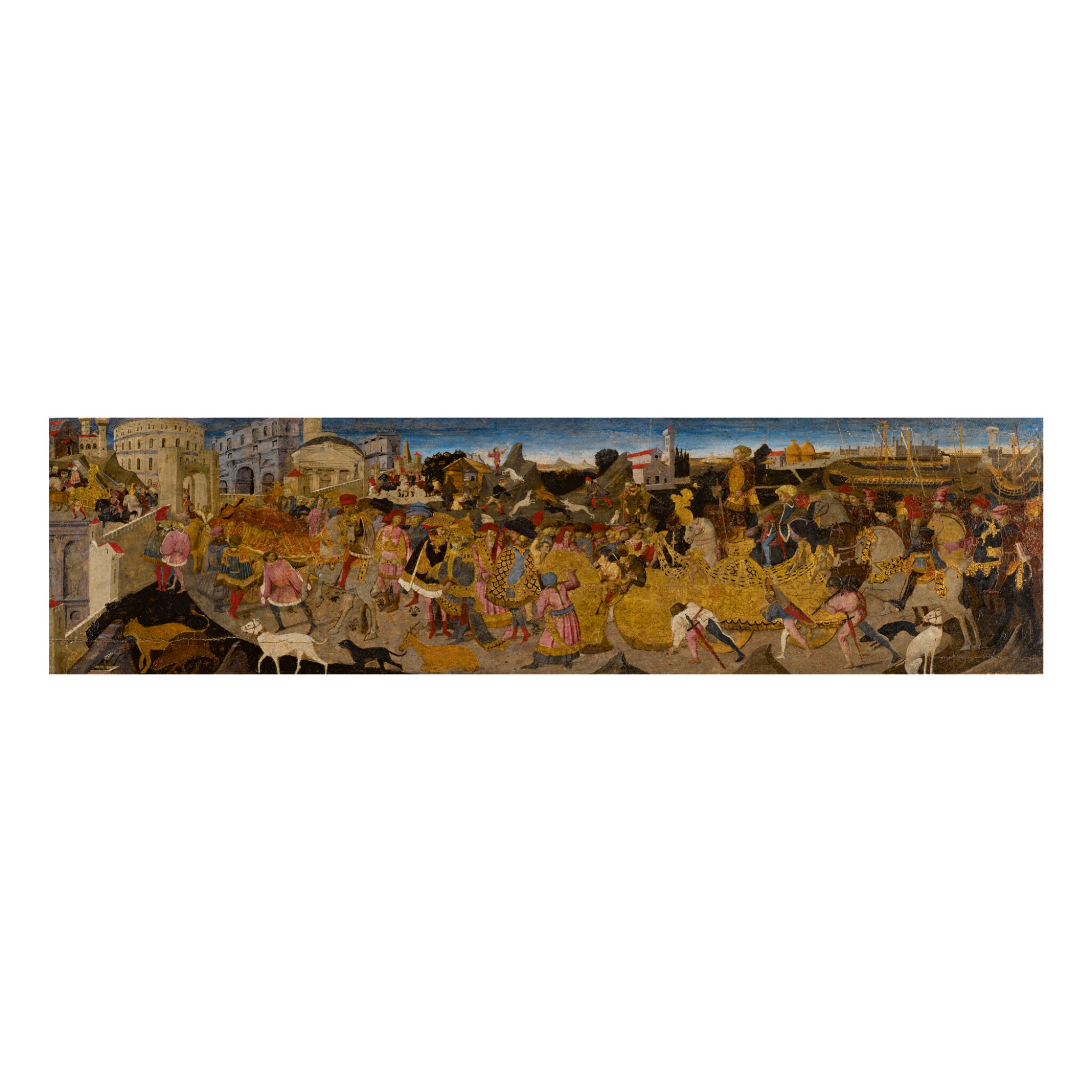 THE TRIUMPH OF MARCUS FURIUS CAMILLUS, A CASSONE PANEL

tempera and gold leaf on panel

This work is painted on a large heavy panel which shows vertical supports on the right side, left side and center. In the lower left, there is a long and noticeably uneven crack running through the brown and white dogs into the head of the smaller black dog. There is a similar crack in the lower right corner, which runs into the legs of the white hound on the right and through the legs of the two figures in the lower right. There is also a small crack in the center of the right edge, and a diagonal crack in the sky in the upper right corner. There is a crack running beneath the longest of the ships through the heads of the figures. These cracks are stable. They are unrestored, and do not necessarily need to be.

The gilding seems to be quite healthy, and the faces and details of the figures are also well preserved. The work was weakened in cleaning at some point, and some of the darker colors in the lower left, center distance, lower right and upper right have received retouches to thinness and cracking.

The retouches could be applied more accurately, but the work can be hung in its current state.

Seized by the Einsatzstab Reichsleiter Rosenberg from the Chateau de Ferrières (inv. no. BOR 58);

In the holdings of the German Embassy, Paris;

Recovered by the Monuments Men at the Buxheim Monastery, Bavaria, and restituted to the Rothschild family 1946/7 (chest number 134);

From whom probably acquired directly by a private collector, and by descent to his son;

Apollonio di Giovanni ran a thriving workshop specializing in the production of luxuriously decorated cassoni and spallieri, decorative furniture panels, to meet the demands of elite Florentine patrons. Cassoni were decorative chests customarily commissioned for a marriage, with lavish ornamentation that only the most affluent families could afford. The chests were often carried in pairs as part of the bridal procession, from the house of her father to her new marital home, containing within them items of her dowry, such as linens and cloth. The valuable cassoni were not only intended as extravagant gifts for the initial nuptial celebrations, but they were also envisioned as future heirlooms and were typically displayed in the husband’s bed chamber, one of the most important and intimate rooms in the home.1 The chests would be decorated with scenes from ancient history, the Old Testament, or from contemporary literature, such as Petrarch, Boccaccio or Dante. The episodes depicted were expected to impart a moral message to the couple and their family and the subject would be carefully selected to reflect the family’s intellectual prowess and their personal values.

Apollonio was celebrated for his inventive designs of secular subjects and his treatment of episodes from ancient Roman history, like the present example. 15th century Florentines proudly envisioned themselves as heirs to the democratic values of their Roman forebears and therefore treasured such narratives.2 Here, we see the triumphant return of Marcus Furius Camillus, riding in a standing position in the golden chariot; he can be identified by the remains of the inscription above his head, · M · F · CHAMMI[…]. The spelling of “Chammillus” reflects the soft pronunciation of the letter “c” in Florentine dialect and can be seen again in the inscription indicating the Campidoglio at left. Camillus, a Roman soldier and statesman, was lauded for his four great victories against the Aequi, Volsci, Etruscans and Gauls, and was nicknamed “Second Founder of Rome” for his restoration of power following the sacking of Rome in 390 BC.3 Camillus was not only powerful and victorious but was also fair, introducing pay for his army. Conscious of the struggles of the plebeian class, he was an ideal moralistic model for the groom. The Roman general is preceded in the procession by carriages laden with the spoils of war, a reference to the hopeful prosperity of the newlyweds. Apollonio represents the city of Rome with a typically idiosyncratic approach to topography, juxtaposing its most famed and recognizable monuments, each labelled in an inscription above, in a charming variant of perspective.