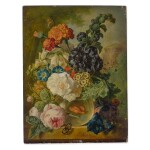 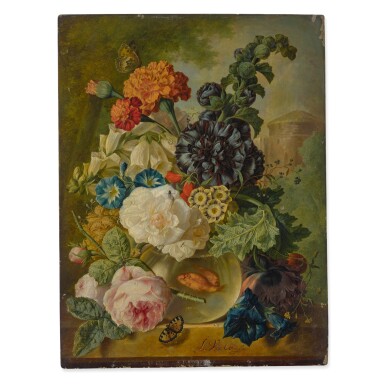 STILL LIFE OF VARIOUS FLOWERS ARRANGED IN A GLASS VASE WITH GOLDFISH, TWO BUTTERFLIES, AND OTHER INSECTS, ALL ON A STONE LEDGE

Panel consists of a single board with all of its edges beveled. It is uncradled, flat, and stable. The flowers remain in beautiful condition and the image reads well. Dots of loss that are barely noticeable are along the edges, like in the top right corner, and likely caused by frame abrasions. Inspection under UV shows scattered retouching to the bottom ledge of the marble. Overall painting is in good condition and can hang as is. Offered framed.

Jan van Os was the leading Dutch still life painter in the second half of the eighteenth century. He studied with Aert Schouman in The Hague and was an independent master there by 1773. Though he also painted landscapes and seascapes, Van Os was famed for his opulent and minutely observed fruit and flower still lifes in the tradition of his countryman Jan van Huysum (1682–1749).

In the present example, van Os has characteristically set his still life on a stone ledge, beyond which can be seen as an architectural structure in a landscape. He has interestingly arranged a variety of flowers in a glass goldfish bowl, against which reflects the colors of the surrounding foliage. This goldfish bowl appears in other examples by the artist, including a still life in an English private collection1 and another still life recently sold at Sotheby's London.2

We are grateful to Dr. Fred G. Meijer for endorsing the attribution to Jan van Os after first-hand inspection.