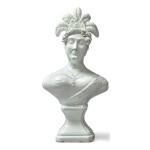 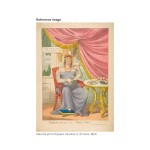 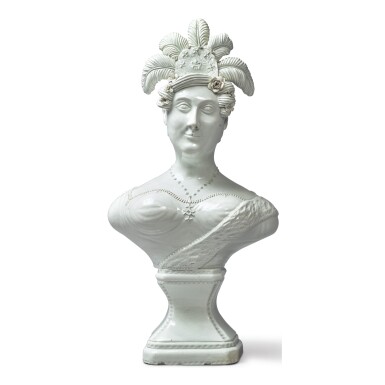 on an integral waisted pedestal base

Overall the bust is in good appearance.

Two applied droplets of necklace lacking. Some slight discoloration to flowers in her hair. Some scattered minor chipping to extremities. There is restoration to two of the feathers in her headdress.

Caroline Amalie Elisabeth of Brunswick (1768-1821) was the long-suffering consort of her first cousin George (1762–1830), Prince of Wales, and later Prince Regent and King George IV of the United Kingdom. Though her marriage to the playboy prince was an unhappy one she was a popular member of the Royal family and her sudden death in 1821 was met with national feelings of grief and even led to suspicions of poisoning. Her funeral procession resulted with riots in the streets of London

A white earthenware bust of Queen Caroline, 22 inches high, was lent by the collector Henry Willett, Esq., of Brighton, to the Bethnal Green branch of the Victoria and Albert Museum in 1899, no. 66. An colored example of this bust was sold at Christie's London, 15 February 1988, lot 115.