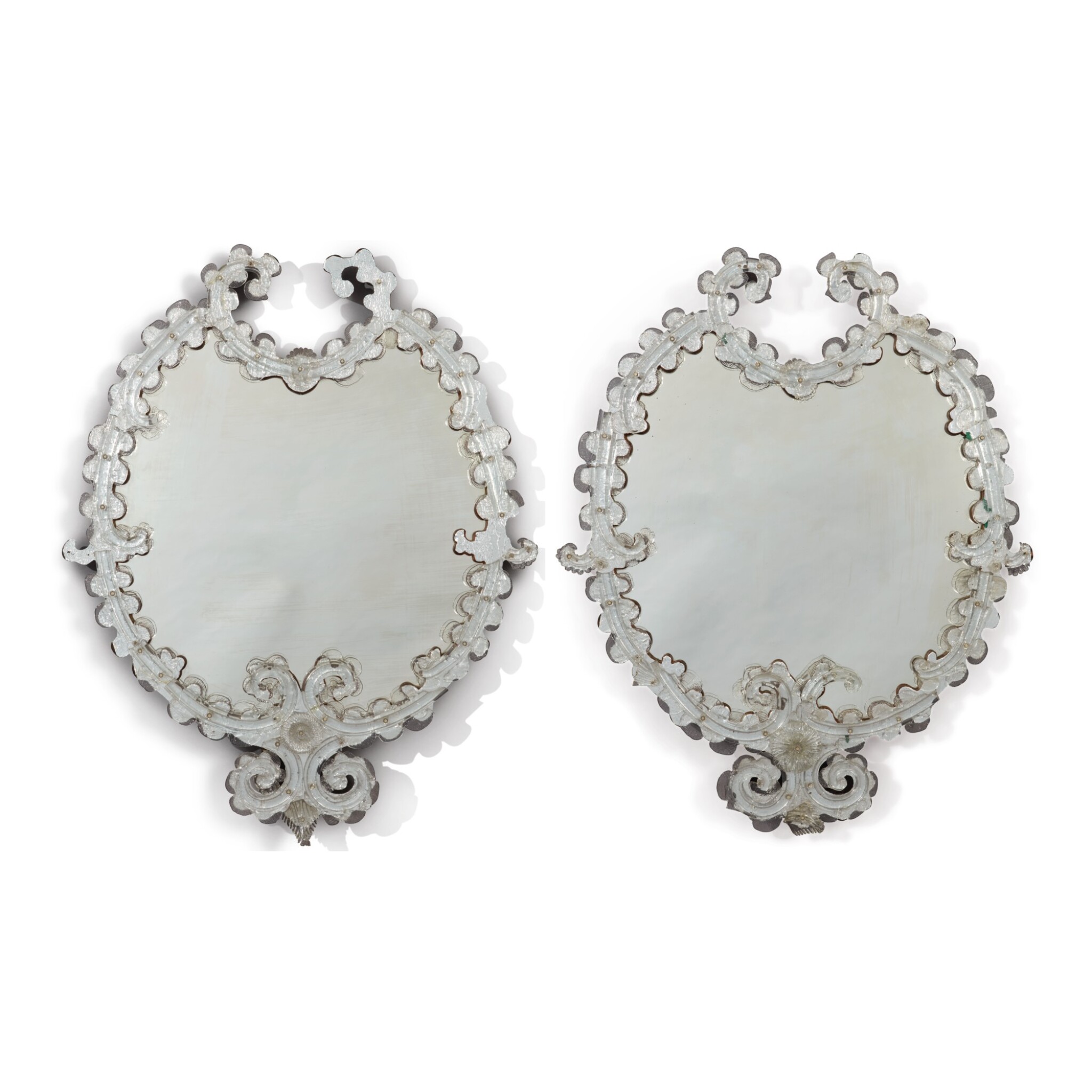 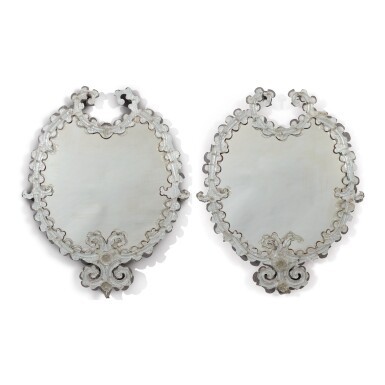 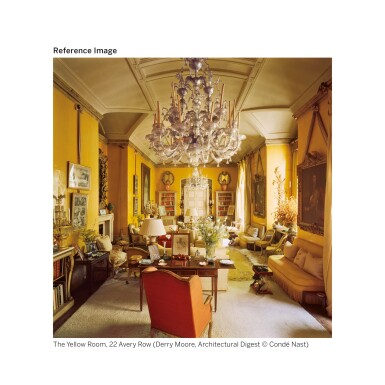 In good condition generally, with some losses to the glass elements. These can be seen when enlarging the catalogue photographs but not very visible when mirrors are hanging apart from upon close inspection due to the silver foil backing. The largest of these are sections of approx. 2 in . 1 in. on one mirror and 2 x 1.5 in., 4 x 3 in. and 6 x 2.5 in. on the other. If desired these could be replaced relatively inexpensively; please refer to Department for a quote obtained by a professional restorer.

J.Cornforth, The Inspiration of the Past (London 1985), ill. plate XVI

The 1950s were a difficult time financially for Colefax & Fowler, so in an effort to economise Nancy Lancaster gave up her Mayfair flat in Charles Street in 1957 and moved into part of the firm's premises in Brook Street, a group of rooms at 22 Avery Row that had formerly been stables, and included a large upper floor room that had been the architect Sir Jeffrey Wyattville's studio in the early 19th century. The space was 46 feet long by 16 feet wide, with an elegant barrel vaulted ceiling, but was not intrinsically light, so Nancy made the bold decision to paint the walls a rich egg-yolk yellow that Fowler then had covered with several layers of rich glazes, creating a glossy finish that has proved impossible to replicate. It became known as the Butter Yellow room, or colloquially 'buttah yellah' in Lancaster's Virginia drawl, and instantly created a sensation. Nancy called it her 'bedsit' or 'maisonette flat', but as the Duchess of Westminster observed, 'to call where Mrs Nancy Lancaster lives in London a "flat" is like calling the Queen Mary a boat'.

The room was eclectically furnished with items from Lancaster's previous residences and included French and Italian armchairs, a pair of neoclassical Russian girandoles, a pair of full-length portraits of Elizabethan sisters from Ditchley, a Boulle bureau Mazarin, modern upholstered sofas and armchairs, a yellow Savonnerie carpet and two Venetian chandeliers copied after a pair from Charles de Bestegui's palazzo. The offered mirrors, their form inspired by English George III models, were originally a set of four and formed a perfect two-dimensional complement to the pair of chandeliers. They were hung flanking the doors either side of the room above tall narrow white and parcel-gilt bookcases that had created by dividing up a large breakfront acquired at the Ashburnham sale, with a pair of large red stoneware vases on one side and a pair of white and gold Chinese vases on the other. The result perfectly encapsulated Lancaster's famous dictum that 'a gentle mixture of furniture expresses life and continuity but it must be a judicious mixture that flows and mixes well. It is a bit like mixing a salad (I am better at rooms than salads.)'

The Yellow Room would be regarded as one of the finest interiors of postwar London and served as a living showroom for Colefax & Fowler; it also sealed Nancy Lancaster's reputation as one of the 20th century's most important designers. As John Cornforth observed, Lancaster was the last representative of the 'Henry James' tradition in England of a deep appreciation of the romantic quality of old architecture and objects, 'but with a completely un-Jamesian lightness and sparkle'