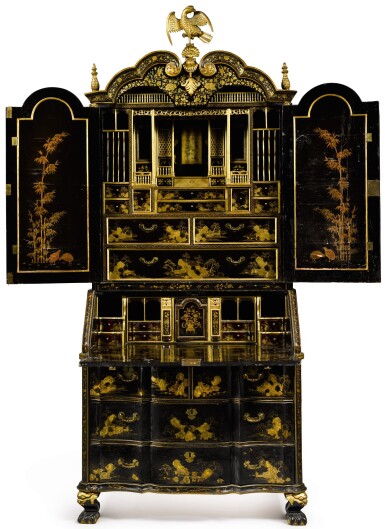 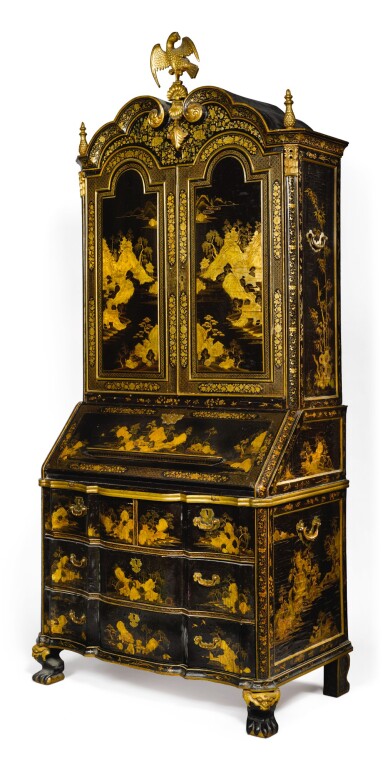 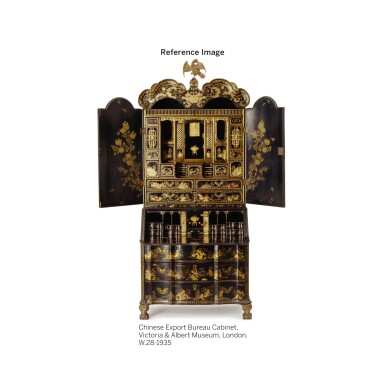 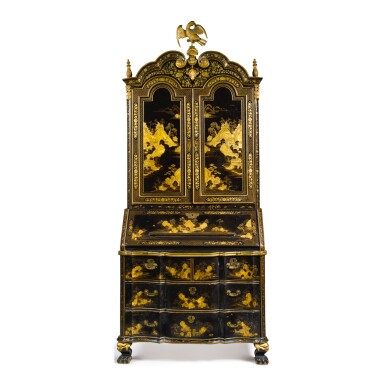 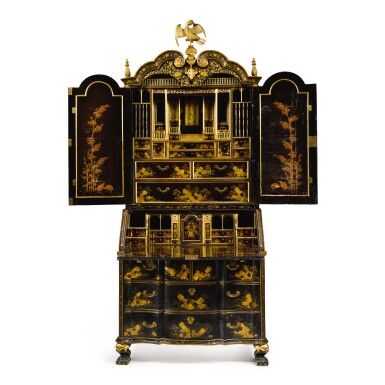 Retaining the majority of the original lacquer decoration with old craquelure and scattered minor losses and lifting commensurate with age, and slight rubbing to gilding in places. Lacquer appears stable. Some areas of restoration and re-touching, primarily on cornice, floral reserves along borders of cabinet doors, and interior drawer fronts on the lower section. Sides of lower section with typical vertical age splits. Inside of proper left cabinet door with area of loss to lacquer on one guinea fowl, and missing area of gilt moulded border along lower edge and proper lower right corner; this is easy to replace. Interior of cabinet doors probably previously with mirror plates behind the hinged lacquer panels.Old repairs to wings of eagle finial. Hardware on lower section likely replaced.

The Buatta export bureau cabinet forms part of a small group of similar works produced in Canton in the 1730s. An extremely closely related example is in the Victoria & Albert Museum (W.28-1935; ill. in A. Jackson and A. Jaffer, eds., Encounters, The Meeting of Asia and Europe 1500-1800, exhibition catalogue, V & A London 2004, p.242 fig.18.8). This has an identical central eagle and shell finial and serpentine outline on the lower section and a nearly identical internal arrangement of drawers and pigeonholes above. Both cabinets represent an early example of Chinese cabinetmakers producing furniture directly based on Western designs. It has not been firmly established to what extent local workshops relied on copying actual prototypes shipped to Asia as opposed to using drawings, engraved pattern books or three-dimensional models, but all three would have been available through the East India trading companies. The use of gold decoration on a black ground is not inherently Chinese and was an attempt to emulate Japanese lacquer, which was universally regarded as superior to Chinese work in the 17th and 18th centuries but not as readily available and more expensive due to the Japanese Emperor's restrictions on foreign trade. The architectural character of the internal upper section also evokes Japanese Buddhist shrine cabinets.

The earliest securely documented Chinese export furniture appears to be a group imported to Denmark in 1735, 1737 and 1738 by Captain Guillaume de Brouwer of the vessel Sleswig, specifically commissioned by the Danish East India Company for sale to King Christian IV. The order included a writing table, lacquered side chairs, and a pair of lacquer Schrif Contors (writing cabinets), which are now in Fredensborg Castle (see T. Clemmensen, 'Some Furniture Made in China in the English Style, Exported from Canton to Denmark, 1735, 1737 and 1738,' Furniture History XXI,1985, p.174-180). The pair is also similar to the offered lot, based on the classic model of the English bureau cabinet that became popular on the Continent, particularly in Germany, Scandinavia and Northern Italy. Interestingly however, their lower sections do not have a serpentine façade and are slightly bombé in outline, a form less common in England and more typical of German and Danish versions of the bureau cabinet, which demonstrates the Canton cabinetmakers closely followed their Western clients' instructions and could adapt to subtle national variations in European furniture design.