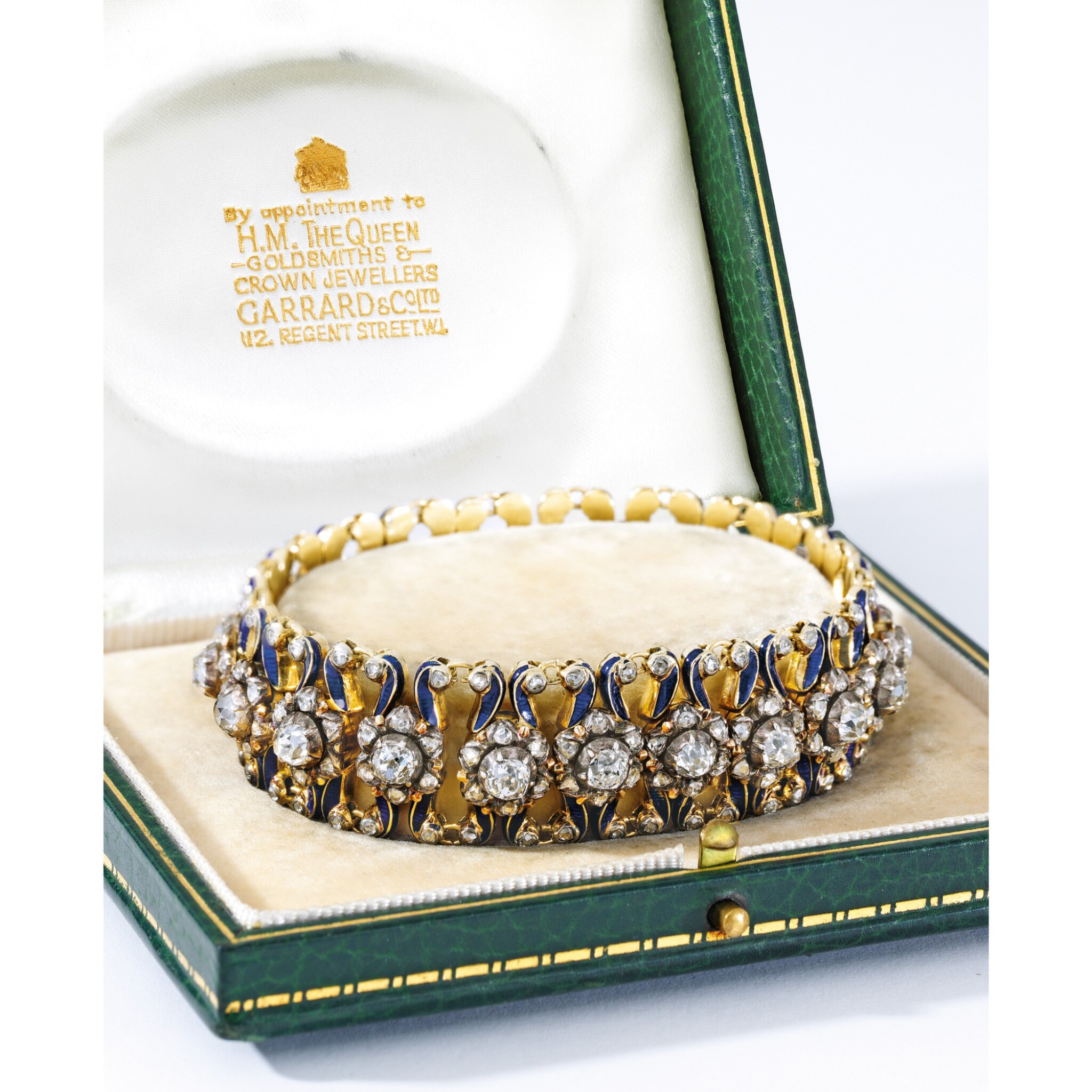 Accompanied by Certificate of Provenance from Kensington Palace, dated 13 June 2006, with images of H.R.H. The Princess Margaret, Countess of Snowdon wearing her antique diamond and enamel bracelet, received by her as a 21st Birthday gift.

Mounting possibly silver and gold. Enamel are in very good condition, a few minor chips and one minor loss of enamel. Twenty old-mine-cut diamonds estimated to weigh approximately 3.80-4.00 carats in total, are mainly about H-I colour, VS-SI clarity, as gauged and graded in the mount. Rose-cut diamonds are bright and lively.

﻿﻿In response to your inquiry, we are pleased to provide you with a general report of the condition of the property described above. Since we are not professional conservators or restorers, we urge you to consult with a restorer or conservator of your choice who will be better able to provide a detailed, professional report. Prospective buyers should inspect each lot to satisfy themselves as to condition and must understand that any statement made by Sotheby's is merely a subjective qualified opinion. Illustrations in the catalogue may not be actual size. Prospective purchasers are reminded that, unless the catalogue description specifically states that a stone is natural, we have assumed that some form of treatment may have been used and that such treatment may not be permanent. Our presale estimates reflect this assumption.Certificates of Authenticity: Various manufacturers may not issue certificates of authenticity upon request. Sotheby's is not under an obligation to furnish the purchaser with a certificate of authenticity from the manufacturer at any time. Unless the requirements for a rescission of the sale under the Terms of Guarantee are satisfied, the failure of a manufacturer to issue a certificate will not constitute grounds to rescind the sale. Gemological Certificates and Reports: References in the catalogue descriptions to certificates or reports issued by gemological laboratories are provided only for the information of bidders, and Sotheby's does not guarantee and accepts no responsibility for the accuracy, terms or information contained in such certificates or reports. Please also note that laboratories may differ in their assessment of a gemstone (including its origin and presence, type and extent of treatments) and their certificates or reports may contain different results.NOTWITHSTANDING THIS REPORT OR ANY DISCUSSIONS CONCERNING CONDITION OF A LOT, ALL LOTS ARE OFFERED AND SOLD "AS IS" IN ACCORDANCE WITH THE CONDITIONS OF SALE PRINTED IN THE CATALOGUE.

Diamond jewels have been closely related to the royalty of the world for thousands of years, serving as an unmistakable symbol of power, wealth and sovereignty. The jewels owned by the British monarchy throughout four hundred years of its continuation includes more than a thousand pieces of historically significant jewels, worn by seven generations of queens.

Princess Margaret was born on the 21st of August 1930 as the younger daughter of King George VI and Queen Elizabeth The Queen Mother, as the only sibling and the younger sister of Queen Elizabeth II. She was well known for her beauty with a great sense of style, which was reflected in her personal collections of jewels throughout her life. Princess Margaret was fond of diamond jewels and several had originally belonged to her grandmother, Queen Mary. Queen Mary had a love and appreciation for jewels and she would wear a tiara and evening gown every night for dinner, even when it was just her and the King, George V, dining together.

When she turned twenty-one, she was gifted the antique diamond bracelet of Lot 1688 together with other fabulous jewels. She was spotted wearing the bracelet many times in public as illustrated in the photographs, indicating her affinity for the piece. Later in life Princess Margaret re-mounted some of her older jewels into modern designs, just as Queen Victoria had done in the past. However, this diamond bracelet was thankfully kept in its original antique setting.

Celebrated for her style and timeless elegance, Princess Margaret combined jewels and fashion to create iconic looks in her time. Famous as one of the most stylish icons of the royals, she revolutionized the way in which the royal dress code would be since accepted. She led a vibrant social life, and many of her adornments were highly sought after as she set trends through her aesthetics. Lot 1688 is a unique bracelet from the late 19th century, engraved ‘21’ to signify Princess Margaret’s age at the time of celebration.

“Having known Princess Margaret for over 21 years, I can safely say that Princess Margarey adored clothes and jewellery. Whenever she dressed, whether for public duties or private occasions, she did so in a flamboyant and colourful manner. This bracelet, gifted to her on her 21st birthday, reflects her unique style, as she was seen on many occasions wearing it throughout her life.

Her jewellery collection was magnificent and contained many private and personal gifts from her family and friends. Anyone lucky enough to own a piece of her jewellery would be investing in a piece of royal history.”