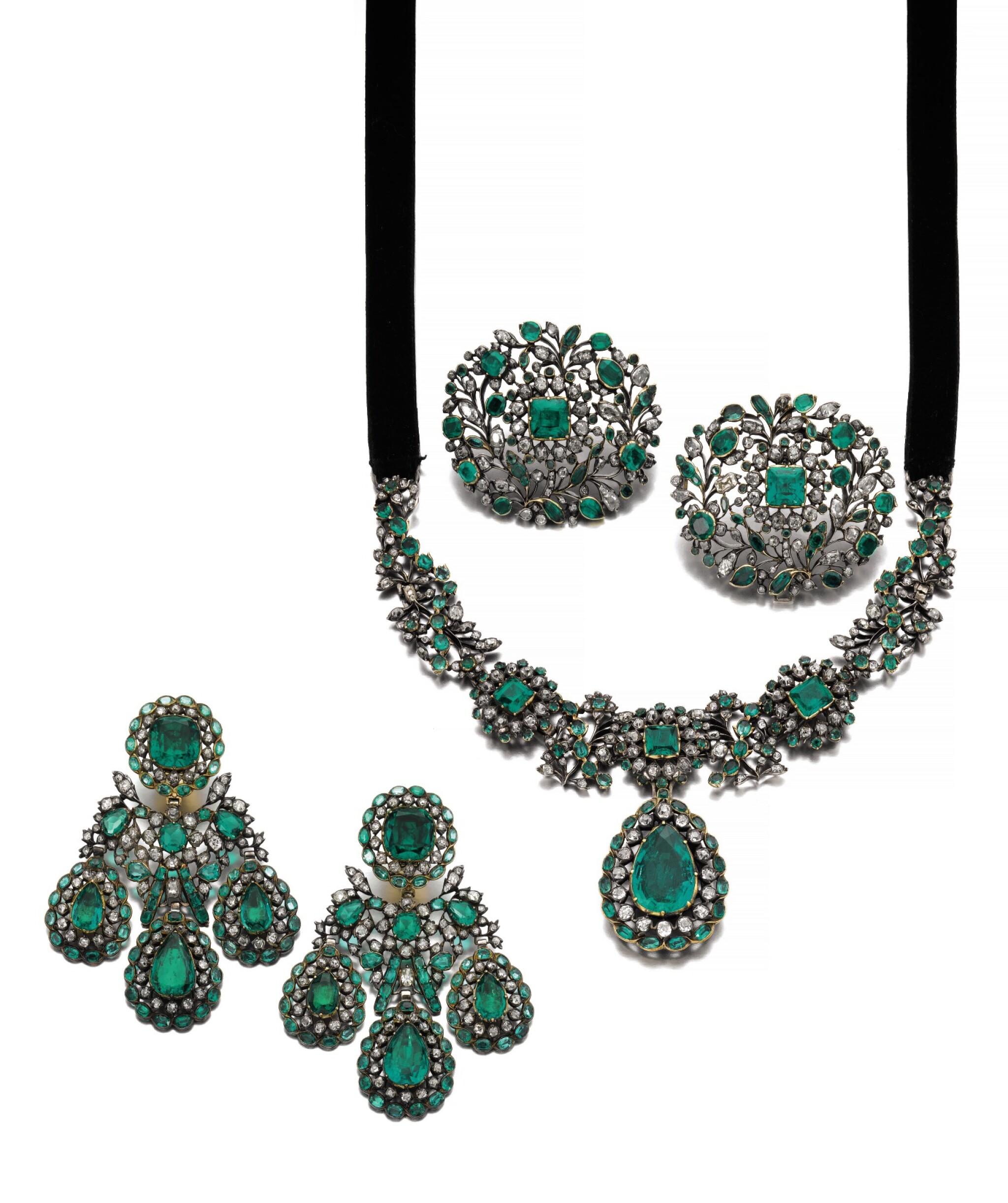 MAGNIFICENT EMERALD AND DIAMOND PARURE, CIRCA 1770

Comprising: a necklace of floral and foliate design in closed-back settings, collet-set with three step-cut emeralds highlighted with oval and circular-cut emeralds, single- and circular-cut diamonds, supporting a pear-shaped emerald weighing 11.94 carats, to a velvet black ribbon, the front of the necklace measuring approximately 190mm, a pair of girandole pendent ear clips set with oval, cushion- and pear-shaped emeralds and cushion-shaped diamonds and two jewels of similar design in closed back settings, fitted case.

Also accompanied by original notarised archives from the Guirior family dated 1877 and 1943.

Emeralds in closed back settings green of medium-strong saturation with typical inclusions, some surface-reaching, minor chips and nicks. Diamonds estimated to weigh a total of approximately 11.00 - 13.00 carats, H-J colour, VS-I clarity, as gauged and graded in the mount. In good condition, consistent with age. Total gross weight approximately 143 grams. Accompanied by a fitted case.

This emerald and diamond parure was given by Manuel de Guirior y Portal, First Marquis de Guirior to his wife Maria Ventura de Guirior, and was then given together with his title, to his great-nephew,

Don José Maria de Guirior and Larrea, Marquis de Guirior, who then gave it to his son

Don José Fausto de Guirior and Larrea, Marquis de Guirior, who then gave it to his gran-daughter,

Manuel de Guirior y Portal, First Marquis de Guirior, Lieutenant General of the Royal Navy, Viceroy of New Granada and Peru was born in Aoiz in the old kingdom of Navarra, on March 21, 1708. Born into an illustrious Navarrese family, his parents were Don Carlos de Guirior Erdozain, and María Josefa del Portal. Having entered the navy at the age of twenty-five, Manuel de Guirior sailed around the world serving several missions to transport troops to various locations within the Mediterranean and fought in the Seven Years’ War against the English. He soon rose through the ranks and was promoted to lieutenant in August 1738.

After decades of loyal service, Manuel de Guirior was notably appointed Viceroy in 1772, as Governor and Captain-General of the New Kingdom of Granada. In this position, de Guirior succeeded Don Pedro Mesia de la Cerda who had submitted his resignation, unable to control the riots in Quito, with whom he had continuous friction. De Guirior's appointment marked the beginning of a new era for New Granada.

As Viceroy, Manuel De Guirior managed to appease the different rebel groups with peaceful interventions. He reformed the religious communities and missions and ensured a more humanitarian treatment of the native population. For example, he took steps to strengthen the economy and also carefully promoted the sciences, by founding the first public library (aimed at the education of the indigenous population). He also re-established the Public University, which was considered a huge success. He opened a hospital and a hospice and founded the first library in Bogota. Simultaneously, de Guirior improved the colony's coastal defenses and altered the cultural geography of New Granada by dividing the city of Bogotá into borrios (or boroughs).

Following these accomplishments, de Guirior became lieutenant-general, by Royal Order, on 20th December 1774. He remained in this position until August 24, 1775, when he was appointed Viceroy, Governor and Captain-General of the kingdom of Peru, relocating to Lima in 1776.

In this viceroyalty, de Guirior continued to apply the policy that had provided him with such excellent results previously. To develop the economy, he adopted liberal measures for commerce, agriculture, industry and mining. Again, he supported scientific research, most notably into the flora of Peru. In June 1977, José Antonio de Areche arrived in Lima as an inspector from the King. Unfortunately, de Areche disagreed with de Guirior over several matters, including taxes, justice and administration. Consequently, de Guirior was subjected to a trial of grievances but was posthumously acquitted.

Having later returned to Madrid, de Guirior died at the age of 80 on 25th November 1788.

This parure is a rare and very fine example of the late 18th Century jewellery which has reached us in its original form. Antique jewels rarely survived and were often dismantled. Due to their scarcity and high value, gold and silver were melted down and reused and precious gemstones were dismantled and reset in new mounts following the changes in taste and fashion.

Very few jewels in closed-back settings, where the backs of the stones are not visible, a technique used until the end of the 18th Century, still exist today, especially in the shape of girandole earrings. Composed of a larger stone combined with a bow supporting three pear-shaped drops, this design was the favorite motive of the seventeenth century and early Eighteenth Century.

The very fine emeralds in this parure further confirm its Spanish provenance. With the discovery and development of new maritime routes in the late 15th Century, the Spanish empire had direct access to a vast amount of natural resources. It is undeniable that Manuel de Guirior, as Viceroy, was able to source the finest emeralds from Colombia.

Gifted by Manuel de Guirior y Portal, the Viceroy of New Granada and later Peru, to this wife, Dona Maria Ventura de Guirior y Otazu, this exquisite parure is therefore referred to as the Virreina Suite in the family archives.