Extraordinary Jewels from the Collection of Cecile Zilkha [塞西爾・齊爾卡珠寶珍藏] 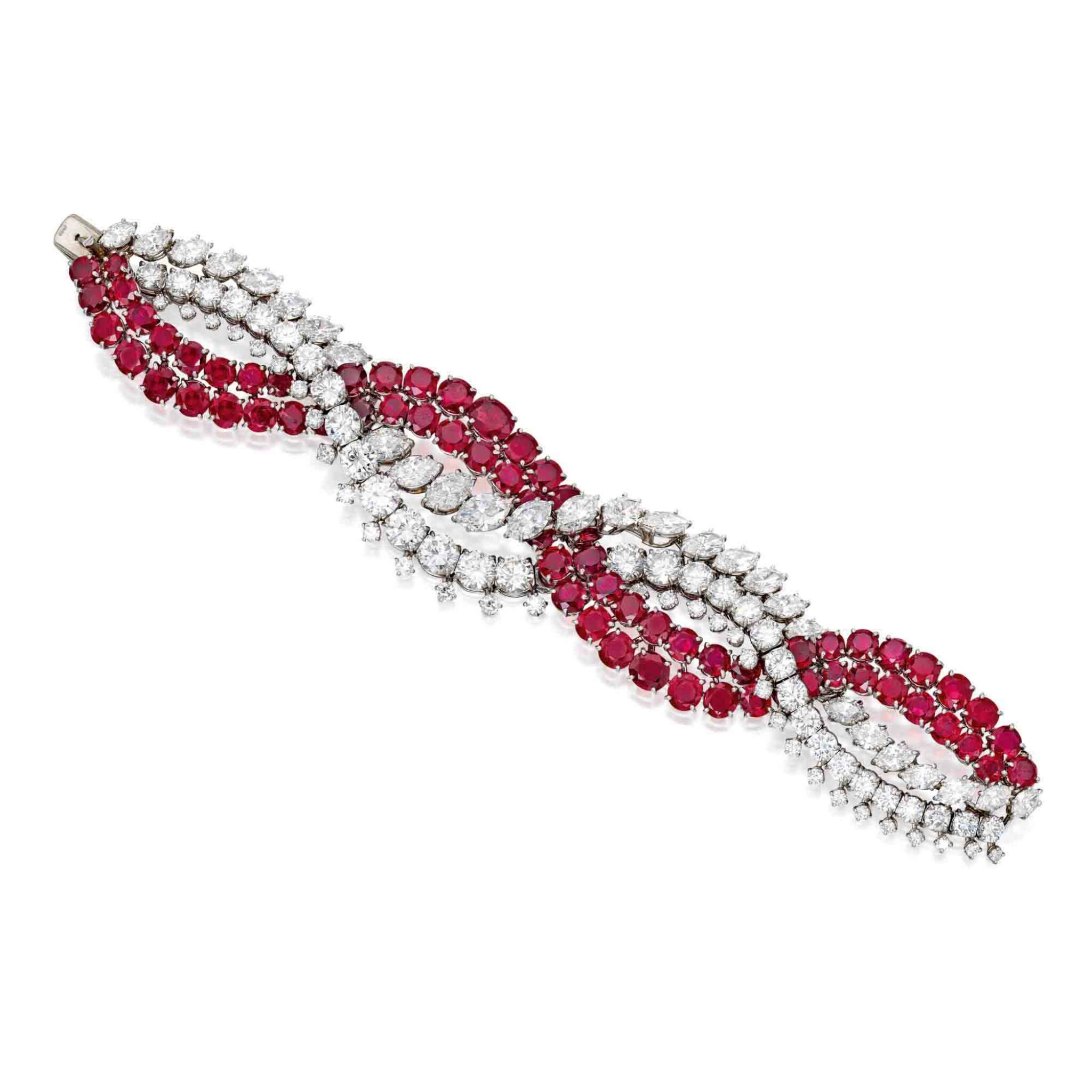 Extraordinary Jewels from the Collection of Cecile Zilkha [塞西爾・齊爾卡珠寶珍藏]

Extraordinary Jewels from the Collection of Cecile Zilkha

Of intertwined design, the graduated rows set with marquise-shaped and round diamonds, accented by oval-shaped and round rubies, length 7 inches, with maker's mark for Jacques Timey, numbered 5600; dated 1965.

In good condition, with light wear to the mounting. Stamped PT950 and OR for platinum and 18 karat (white) gold. The rubies stated to weigh a total of approximately 57.55 carats are medium slightly purplish red color, slightly to moderately included, some examples with surface abrasions and chips to the girdle, only visible upon close inspection. The diamonds stated to weigh a total of approximately 37.00 carats are approximately F-G color, VVS-VS clarity. Width of band at widest point approximately 1¼ inches. Well made and nicely flexible. Fitted with safety closure. Accompanied by a copy of an Insurance appraisal from Harry Winston, dated June 14, 1997. Accompanied by an authenticity letter from Harry Winston. Accompanied by AGL report no. 1106185 dated January 22, 2020 stating that the rubies are of Burmese origin, with no indications of heating.

For a bracelet of similar design, see Harry Winston: The Ultimate Jeweler by Laurence Krashes, page 154-155.

﻿Accompanied by an authenticity letter from Harry Winston dated March 5, 2020.

﻿Accompanied by AGL report no. 1106185 dated January 22, 2020 stating that the rubies are of Burmese origin, with no indications of heating.

Born in Goa in 1917, Ambaji Shinde, the son of a bangle maker, began his journey into the world of design when he attended the JJ School of Arts in Mumbai. He began working for Narotthamdas Jhaveri, and the firm soon flourished to become the official court jewelers to some of the most prominent rulers including the Maharajas of Baroda, Porbandar and Dhar, as well as the Nizam of Hyderabad, once the wealthiest man in the world. When India gained independence in 1947, the age of Maharajas abruptly came to an end. As a result, many pieces of important jewels accumulated during their rule were dismantled, the gems dispersed, hidden, sold and reimagined.

Shinde was hired by Harry Winston in 1962 and it was during the four decades he spent there as the principal designer that he developed and perfected his gemstone-driven style, transforming high jewelry into fine art. Often referred to as the “jewel behind the jewel” at the firm, Shinde brought a new dimension and sensibility to Winston’s designs with his expert understanding of how stones could be assembled. In the course of his career, Shinde’s designs adorned countless Hollywood stars and society ladies including Liz Taylor, Sophia Loren, Halle Berry, Gwyneth Paltrow and Madonna.

The present bracelet is a superb example of Shinde’s timeless style, illustrating his knowledge of stone-cutting and his exceptional sense of balancing proportion and scale. The way the graduated rubies are off-set against the rows of diamonds causes the gems to appear to dance and float, possessing a remarkably lithe flexibility, with only the slightest amount of the mounting visible.

Despite his remarkable reputation amongst the jewelry world, Shinde’s talents remain largely unknown outside the industry. Lot 90 presents an opportunity for today’s collectors and connoisseurs to acquire a wearable masterpiece and appreciate Shinde’s legacy.