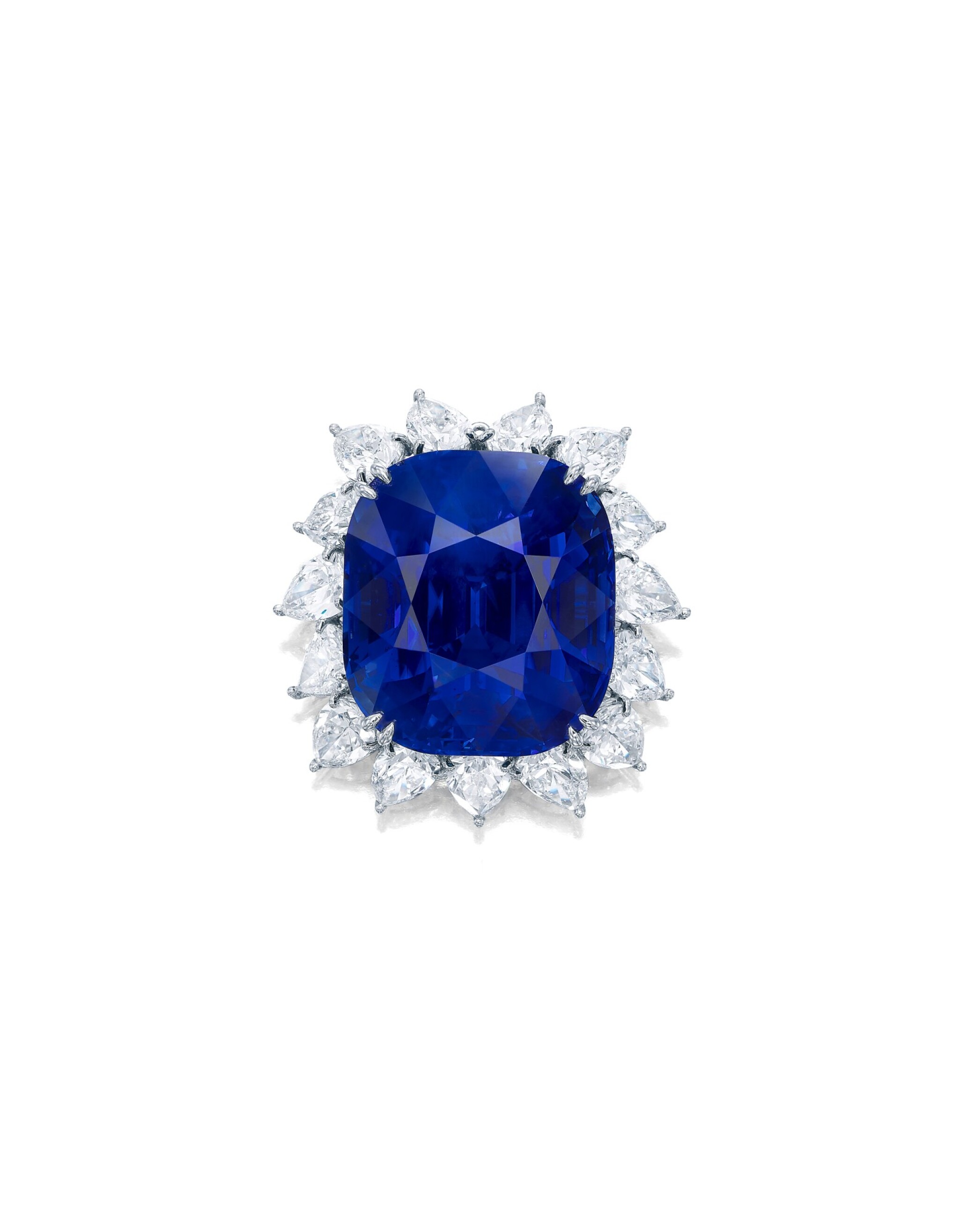 AN EXTRAORDINARY SAPPHIRE AND DIAMOND PENDANT

Set with a cushion-shaped sapphire weighing 118.88 carats, within a surround of pear-shaped diamonds weighing 16.06 carats in total.

Accompanied by SSEF report no. 73209, dated 11 March 2014 and Gübelin report no. 14038086, dated 29 March 2014, both stating that the sapphire is of Burmese origin, with no indications of heating, this colour variety may also be called "royal blue" in the trade.  Also accompanied by SSEF Premium appendix letter stating that "the sapphire exhibits an highly impressive size..., combined with a very attractive and well-saturated blue colour, poetically referred to as 'royal blue', and an excellent purity... A natural sapphire from Burma of this size and quality is extremely rare and thus can be considered a true treasure of nature".

Further accompanied by Gübelin appendix letter stating that "the 118.88 ct natural sapphire...displays a homogeneous and richly saturated royal blue colour, which typifies the finest of these gems... In addition, this remarkable gemstone has been spared thermal treatment. Such a combination of characteristics is very rare in Burmese sapphires of this size."

Please refer to the reports, dossier and letters for further details.

In response to your inquiry, we are pleased to provide you with a general report of the condition of the property described above. Since we are not professional conservators or restorers, we urge you to consult with a restorer or conservator of your choice who will be better able to provide a detailed, professional report. Prospective buyers should inspect each lot to satisfy themselves as to condition and must understand that any statement made by Sotheby's is merely a subjective qualified opinion. Illustrations in the catalogue may not be actual size. Prospective purchasers are reminded that, unless the catalogue description specifically states that a stone is natural, we have assumed that some form of treatment may have been used and that such treatment may not be permanent. Our presale estimates reflect this assumption. Certificates of Authenticity: Various manufacturers may not issue certificates of authenticity upon request. Sotheby's is not under an obligation to furnish the purchaser with a certificate of authenticity from the manufacturer at any time. Unless the requirements for a rescission of the sale under the Terms of Guarantee are satisfied, the failure of a manufacturer to issue a certificate will not constitute grounds to rescind the sale. Gemological Certificates and Reports: References in the catalogue descriptions to certificates or reports issued by gemological laboratories are provided only for the information of bidders, and Sotheby's does not guarantee and accepts no responsibility for the accuracy, terms or information contained in such certificates or reports. Please also note that laboratories may differ in their assessment of a gemstone (including its origin and presence, type and extent of treatments) and their certificates or reports may contain different results. NOTWITHSTANDING THIS REPORT OR ANY DISCUSSIONS CONCERNING CONDITION OF A LOT, ALL LOTS ARE OFFERED AND SOLD "AS IS" IN ACCORDANCE WITH THE CONDITIONS OF SALE PRINTED IN THE CATALOGUE.