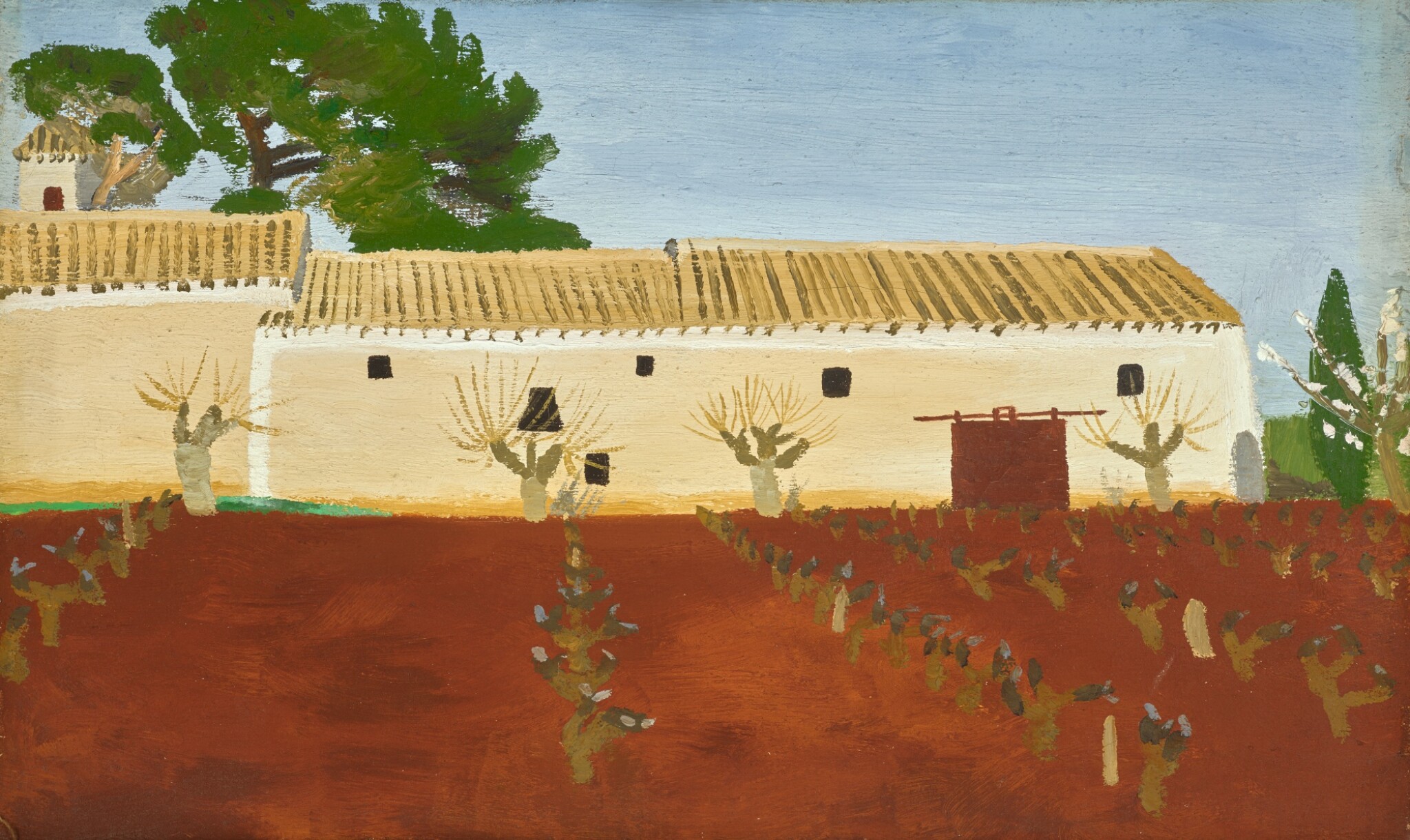 The canvas is original and undulates. There are stretcher bar marks to the left and right edges. There is an Artist's pinhole in the centre of the upper edge. There is frame staining and frame abrasion to the extreme edges of the work. There is a small push to the extreme right edge towards the upper corner, with a more minor instance to the extreme left edge towards the upper corner. There are two fine cracks to the roof of the building. There are fine lines of craquelure and very slight lifting associated with the left stretcher bar, with other more minor instances elsewhere. There is a tiny speck of loss to a small area of craquelure in the sky, towards the centre of the upper edge, with further more minor instances elsewhere. This excepting, the work appears in good overall condition.

Inspection under Ultraviolet light does not appear to reveal any signs of fluorescence or retouching.

The work is presented in a painted wooden frame under glass.

John Gielgud, by whom gifted to the present owners, circa 2000

We are grateful to Jovan Nicholson for his kind assistance with the cataloguing of the present work.

When Winifred Nicholson lived in Paris during the 1930s she delighted in a number of trips to the south of France, most notably visiting her friend Jean Hugo, the great-grandson of Victor Hugo, at his house Mas de Fourques, near Lunel. Here she painted a number of pictures, writing ‘I have never been in a nicer place to paint’. Many of these paintings were exhibited at her solo exhibition at the Leicester Galleries in 1936, including The Shepherd, Mas de Fourques and White Horseman in the Maquis (see ‘Winifred Nicholson: Liberation of Colour’ Jovan Nicholson, Philip Wilson Publishers, 2016, pp. 22, 74-6). The current picture shows the view looking west towards the house, with clipped vines in the foreground, pollarded mulberries silhouetted against the white of the barns with the magnanery to the far left, and to the right an almond tree in blossom, suggesting the picture was painted in the early spring.

Having created an impressive body of work on stage, screen and in the recording studio, this year marks Michael York’s fiftieth year as a professional actor in which he has been awarded Britain’s OBE, France’s Arts et Lettres, and a Star on the Hollywood Walk of Fame. Beginning with Britain’s National Youth Theatre and at Oxford University, he joined Laurence Olivier’s National Theatre Company and later made his film debut in The Taming of the Shrew. York's more than 60 other movie credits include Romeo and Juliet (1968), Cabaret (1972), The Three Musketeers (1973), Logan's Run (1976), and the Austin Powers film series (1997–2002). Television work, with several Emmy-nominations, includes The Forsyte Saga, Great Expectations, Space, The Far Country, The Heat of the Day, The Lot and Curb Your Enthusiasm as well as a frequent guest on The Simpsons.

Among Michael’s several Broadway credits include “Someone Who’ll Watch Over Me,” “Bent,” "The Little Prince,” “The Crucible,” and the world premiere of Tennessee Williams’ “Outcry” as well as playing King Arthur in a US tour of “Camelot” and he most recently appeared in a concert performance of “My Fair Lady” at the Kennedy Center. His extensive narration and voice-over work has been Grammy-nominated and his radio work includes broadcasts for LA Classic Theatre Works and for BBC Radio. York’s autobiography, “Accidentally on Purpose” (1992) was followed by “A Shakespearean Actor Prepares,” (2000) “Dispatches from Armageddon,” (2001) “Are My Blinkers Showing: Filmmaking in the New Russia,” (2005) and most recently “The Readiness is All” (2018).

Patricia McCallum began her career in the fashion department of Vogue magazine in New York and then moved to Glamour magazine as the Photographer/Travel Editor. She was assigned to photograph Michael York in 1967 and the two were married shortly thereafter in March 1968. Photographing and writing assignments continue the pattern of Pat’s life and she has exhibited her work in major museums in the United States and internationally, including the Corcoran Gallery of Art in Washington, D.C., Evansville Museum in Evansville, the Marble Palace of the Russian State Museum in St. Petersburg, the Nostic Palace in Prague, the Kunsthalle Museum in Mannheim, the Hong Kong Film Archive in Hong Kong, and the Wellcome Trust in London. Her photographs and exhibits have been reviewed by over 100 newspapers and 100 magazines and her work continues to be featured in notable private collections and publications throughout the world, including her own publications “A Photographic Book of Michel Tournier’s Vendredi Ou La Vie Sauvage” (1981), “Masked, Uncovered, Unmasked” (1997), “Covered-Uncovered” (2004), “Going Strong” (1991) and “Fame & Frame” (2008).

Pat and Michael York’s extensive travels and dedication to the arts is reflected in their passionate collecting. In addition to Old Master Drawings, the breadth of their collection includes highlights by David Hockney, Pablo Picasso, and an exceptional group of Russian theater and costume designs from the early twentieth century. Sotheby’s is honored to present works from the Private Collection of Pat and Michael York in a series of auctions in New York and London in spring 2020.