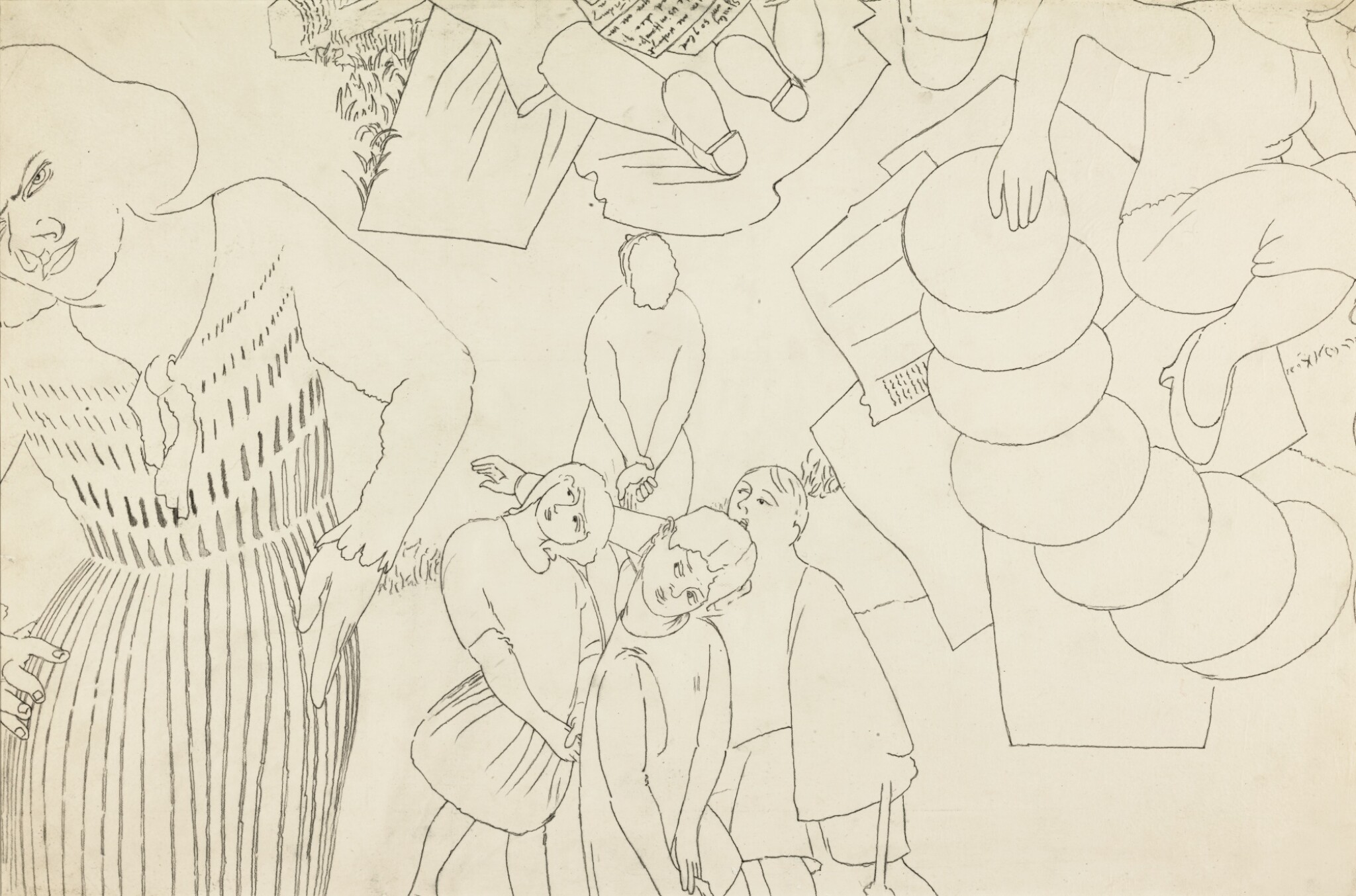 STUDY FOR THE APOTHEOSIS OF HILDA, OR, HAMPSTEAD HEATH LITTER

The work is window mounted and presented in a painted wooden frame under glass.

Private Collection, U.S.A., from whom acquired by present owner

We are grateful to Carolyn Leder for her kind assistance with the cataloguing of the present work and the note at sothebys.com.

This is a study for a part of Spencer’s final tribute to his first wife, the artist Hilda Carline. It can be seen in pencil outline on the right-hand side of his large unfinished canvas of The Apotheosis of Hilda, or Hampstead Heath Litter, 1959 (pencil and oil on canvas, 200.5 x 706 cm /79 x 278 in, private collection). He had also considered alternative titles: Hilda with God, Hilda on Hampstead Heath, or simply Litter. This was designed as the main picture - the equivalent of an altarpiece - for the Hilda Chapel of his projected Church-House, where it was to be flanked by a series of further paintings featuring his life with Hilda.

Spencer devoted much time in his final decade to the two themes of Hilda and Cookham regatta, the person and the place that meant most to him. On 8 April 1953, he wrote to Hilda that he intended to ‘do a series about Hampstead and its Hilda associations comparable to the Regatta series’ (Tate Gallery Archive 733.1.1685). Both series were intended for the Church-House, wished for as a sequel to the Sandham Memorial Chapel, Burghclere (now National Trust), which commemorates his military service in the First World War. The Church-House was intended to celebrate love and his home village of Cookham, but it was never built, although he produced ever-shifting schemes of pictures for it.

Hampstead Heath, letters and litter – all loved by Spencer - quite naturally dominate the unfinished picture of The Apotheosis of Hilda. He first met Hilda in 1919 at the Carline family home at 47 Downshire Hill, Hampstead. They took long walks on the Heath during the period of their courtship and successive engagements (which Spencer broke off some six or seven times). They were married in 1925 and lived for the next two years in Henry Lamb’s studio, 3 Vale Hotel Studios in the Vale of Health, in which Stanley had been staying before their marriage. It was here that he painted The Resurrection, Cookham 1924-6 (Tate) and their elder daughter Shirin was born. The building has been replaced by a block of flats, aptly named Spencer House. Their years in Hampstead were the time of their greatest happiness together.

Hilda can be seen on the left of the drawing, standing near a group of children who glance up at her. The boy on the right almost certainly holds one of the paper streamers issuing from a handle that children play with elsewhere in the composition. There is a letter near the top of the drawing in which the writing can be partially deciphered, referring to Stanley and Hampstead, with the words ‘am so glad’.

Hilda and Stanley each appear several times in the picture which is crowded with people, many of whom pick up and read the Spencer letters. Hundreds of love letters are scattered on the Heath like Bank Holiday litter: some are written on long sheets, others are whirled around like leaves. The idea of the painting, Spencer wrote, was inspired by his writing of letters to Hilda and by his seeing litter on Hampstead Heath. The motifs are intentionally symbolic of his love for Hilda and his physical relationship with her. The picture celebrates the primacy of letters in their lives. They wrote constantly to each other, even after their marriage and divorce, and he even continued writing to Hilda after her death in 1950. His letters could be two or three hundred pages long. In 1924, Spencer wrote, ‘I wish we could both celebrate and chronicle every second of each other’s life. I don’t feel this is a letter, it is not it is a wonderful spiritual journey that we are both taking together.’

In a letter to Hilda in 1954, Spencer discussed the composition, which then existed only as a series of drawings: ‘This belongs to the part of the Hilda series which deals with our Hampstead life… I tried to make it a manifestation of the joy of our united souls. It is a kind of Vale of Health paradise or heaven…Hilda is really in Heaven as she walks through the rubbish on Hampstead Heath. Can God have created in the manner of a Borough Council? (TGA 733.1.1686)’.