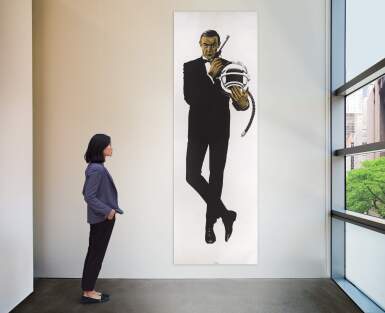 This advance French poster, with the classic image of Sean Connery in a tuxedo with his right arm across his body, holding his gun, was first seen on the British poster for From Russia with Love in 1963. This image of James Bond has become synonymous with 007. The same image appears alongside the credits on all three of the British posters for this film. However, the French distributors had Joseph Benari re-work this image of Bond in his own style. This style of poster would have been pasted on billboards in major cities in France, months ahead of the release of the film, and act as a teaser, as there is no mention of the name of the film.

This exceptionally rare huge billboard poster has only surfaced a few times over the past twenty years.

Very good condition, with the colours remaining bright. Restoration to folds, tape marks around the edges and corners of the poster, and on the centre, where the two sheets were joined. There are some surface marks in the black areas.