Irish Art, including Property from the Collection of Sir Michael Smurfit 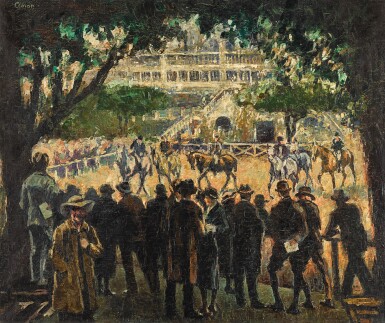 Original canvas, undulates slightly in the corners. There is some minor surface dirt otherwise in very good original condition with strong passages of impasto throughout. There is a sketch of a gentleman on horseback on the reverse.

Under Ultraviolet light there appear to be no signs of retouching.

Held in a painted wood frame.

The Dublin Horse Show, held at the Royal Dublin Society, has been attracting excited crowds since first established in 1868 and today is one of the leading international show-jumping events. For an artist such as William Conor, who was drawn to people throughout his career, it was a natural subject for him. It marks a departure however from his portrayals of working-class life which characterise his career. Here, Conor depicts the fashionable attire of the onlookers, highlighting the show’s status as the sporting and social event of the year.

Also more ambitiously, Conor does not focus on a small group of characters as customary; rather he successfully presents an enlarged view, taking in the crowds, the arena and the grandstand behind. However, Conor clearly could not resist one more precise character study, seen in the figure who is turned directly to the viewer.

The composition is superbly realized as is Conor’s painting technique. The surface bears rich impasto, and Conor employs short, colourful brushwork to evoke the crowd seen in the middle-distance on the left-hand side. By framing the picture with the canopy of trees and the darkened area of figures in the foreground, the viewer’s eyes are drawn to the horses in the centre of the composition parading in the sunlight. At the outset of his career, Conor taught himself equine anatomy by visiting Johnson's Horse Repository in University Road, Belfast – a practice which enabled him to masterfully capture horse and rider in movement evident in the present painting. The overall result is a vivid portrayal of this iconic event and stands as one of Conor’s most accomplished works in oil.