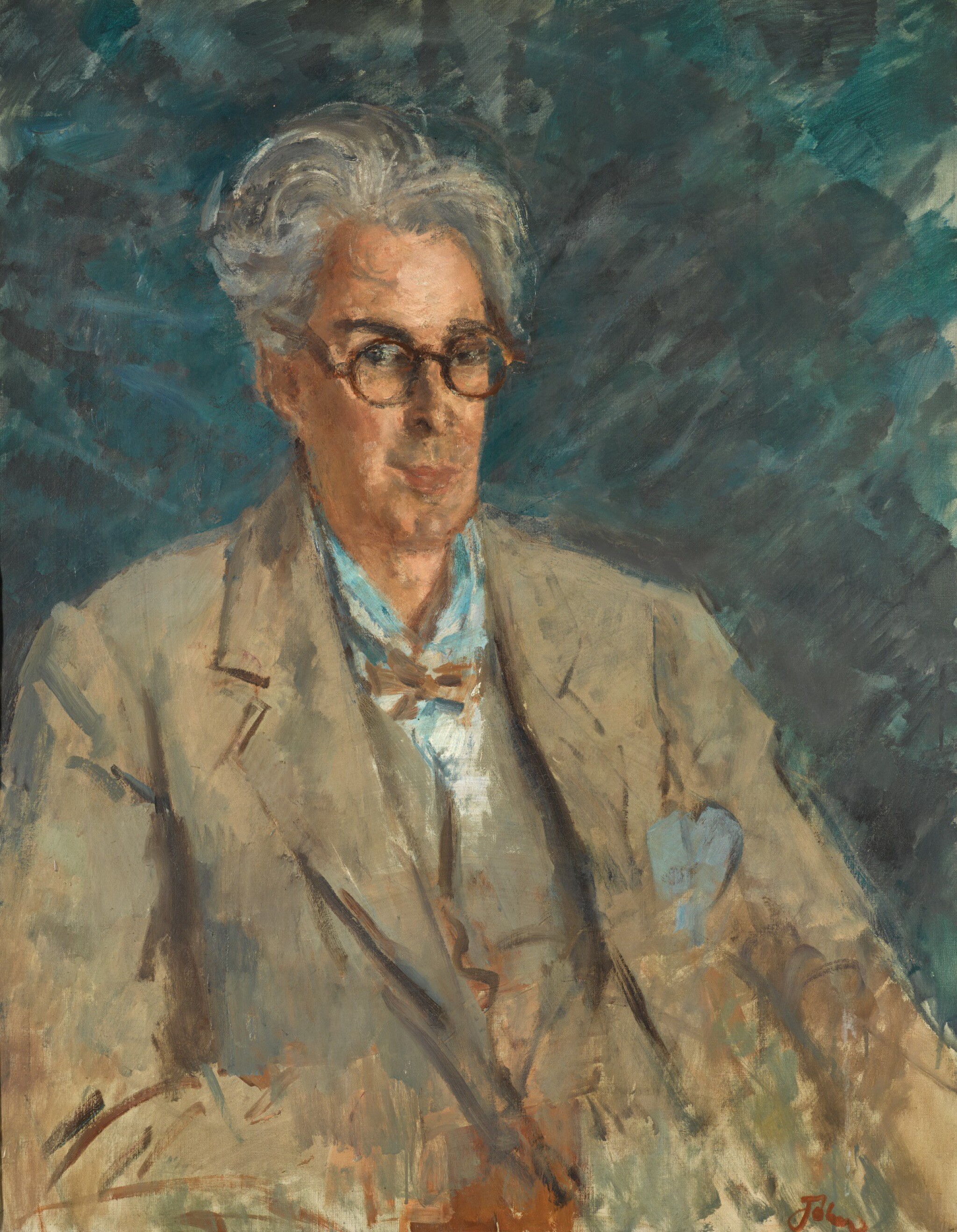 Original canvas loosely stretcher over another canvas. There are some minor stretcher bar marks along the upper edge, some very minor paint separation to the sitter's glasses and below his right ear; otherwise in good overall condition.

There is a thick varnish however there appear to be no signs of retouching.

Acquired directly from the artist by his student, son of Colonel W.E. Phillips and thence by descent to his widow Mrs Eric Phillips, from whom acquired by E.J. Rousuck, New York;

Purchased from the above by a private collector, U.S.A., October 1970;

Many of John’s finest portraits are of writers and fellow artists. He was introduced to W.B. Yeats during the early years of the twentieth century at the home of Will and Alice Rothenstein in Hampstead, London, and the young painter quickly found inspiration in the poet’s verse and romantic vision.

Over his career John appears to have executed four completed oil paintings of Yeats, of which the present work is the only one still in private hands. In 1907, on the suggestion of Lady Gregory’s son Robert, he was commissioned to create an etching for the frontispiece of A.H. Bullen’s volume of the poet’s collected works. John duly received an invitation to stay with Lady Gregory at Coole Park for the sitting, and after some initial hesitation, accepted the offer. As well as John’s preliminary sketches for the etchings, he completed two oils, including a portrait in the Manchester City Art Gallery and a study in the Tate Collection. In these portraits Yeats seems to embody John’s poetic ideal, and the artist later recalled that ‘with his lank forelock falling over his russet brow, his myopic eyes and hierarchic gestures, he was every inch a twilight poet’ (John quoted in M. Holroyd, Augustus John. Volume 1: The Years of Innocence, London, 1974, p.260). Yeats initially rejected the etching, which he believed made him appear ‘a sheer tinker, drunken, unpleasant and disreputable’ and chose one by Sargent instead. However, he eventually came to admire the portrait and the two men became close friends.

John returned to Ireland several times, and in the summer of 1930, the writer Oliver St John Gogarty invited him to stay at his new hotel, Renvyle House, in Connemara. Yeats was also a guest, and Gogarty arranged for John to do a ‘serious portrait’ of him, which Yeats felt ‘a great honour.’ Two works survive from this sitting: a portrait now in the collection of the Glasgow Art Gallery and Museum and the present painting.

Twenty-three years on from his first portrait of the poet, John noted that Yeats was now ‘a mellow, genial and silver haired old man,’ (John quoted in M. Holroyd, Augustus John. Volume 2: The Years of Experience, London, 1975, p.138) and for the Glasgow Museum portrait, depicted the poet sitting in the open air with a rug over his knees and a hat on his lap, his white hair blown over his forehead by the wind. The simplicity of the present work strikes a more distinguished tone befitting Yeats's position as Ireland's most important poet entering the last decade of his life.